Sebastian Vettel cruises to his third victory of the season at the Japanese GP and significantly cuts down his points deficit to Ferrari's Alonso. 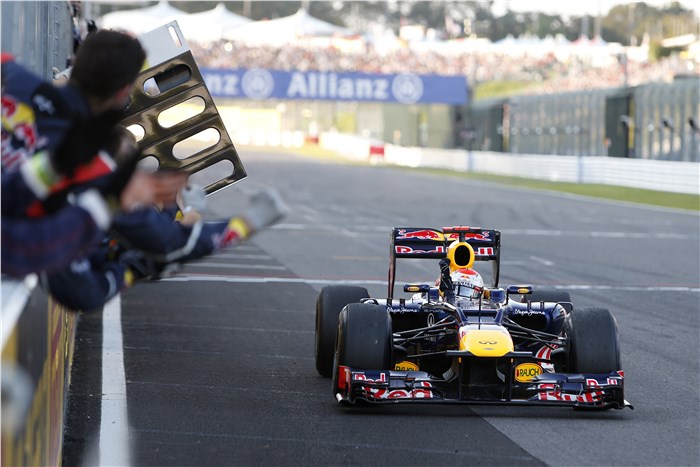 The reigning champion is now just four points behind with five races to go, and has momentum on his side after back to back victories.

Felipe Massa came through from 10th on the grid to second for his first podium finish in nearly two years.

But for the home crowd everything was insignificant compared to Kamui Kobayashi fending off Jenson Button for his maiden F1 podium in third place, as he equalled the best ever finish for a Japanese driver.

Vettel's third Suzuka victory in four starts at the venue came easily as several likely challengers were eliminated in a chaotic first lap.

The carnage began when Alonso's Ferrari and Kimi Raikkonen's Lotus banged wheels on the run to the first corner. That caused damage to the Ferrari and left it spinning into the sand trap.

Kobayashi had thrust his Sauber between the Red Bulls off the line, and things then got much worse for Mark Webber when Romain Grosjean slid into him at the second corner.

The Lotus driver picked up front wing damage and a 10-second stop/go penalty, while Webber was spun to the back and needed a pitstop for checks.

As the chain reaction unfolded behind, Nico Rosberg's Mercedes was taken out in a clash with Bruno Senna's Williams.

Once the resultant safety car had come in, Vettel was free to dominate, leading by as much as 20s on his way to a third victory of 2012.

Kobayashi held second until the first pitstops, when both he and the chasing Button were leapfrogged by Massa. Like Button, the Ferrari driver had gained a lot of ground in the first-corner shambles, and once ahead of the McLaren and Sauber, Massa was quick enough to pull away.

Button tried his utmost to similarly demote Kobayashi, but a slightly slow final pitstop did not help and the local hero was able to keep last year's Suzuka winner at bay.

Lewis Hamilton had a quiet start to the race in the second McLaren before coming through to fifth. He fell victim to a superb dive-bomb pass from McLaren replacement Sergio Perez in the first stint - the Sauber having dropped behind in a failed outside-line bid to pass Raikkonen at the first corner.

Hamilton then got back ahead of Perez at the first pitstops, and as he tried to retaliate down the outside at the hairpin, Perez ran wide and spun into retirement.

The McLaren then jumped Raikkonen for fifth at the second stops - emerging alongside the Lotus and muscling it aside at the second turn despite Raikkonen seeming to have the momentum.

Webber recovered to ninth, pitting just once more after his lap-one stop.

Daniel Ricciardo made it two Australians in the points as Toro Rosso's mini-resurgence continued. Ricciardo resisted pressure from Michael Schumacher to the finish, preventing Mercedes from scoring this weekend.

The lap one mess gave Caterham a sniff of an opportunity as Heikki Kovalainen emerged in 11th. He could not stay ahead of the recovering frontrunners, though.