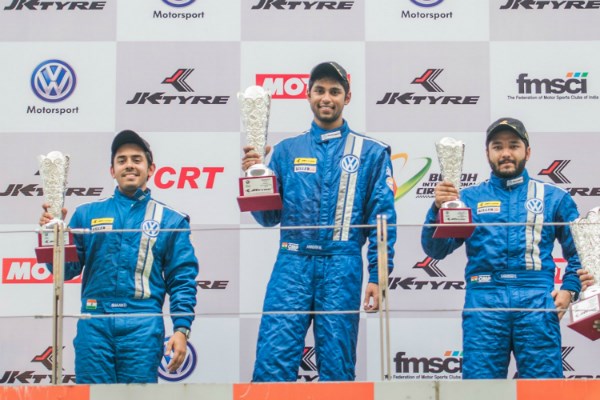 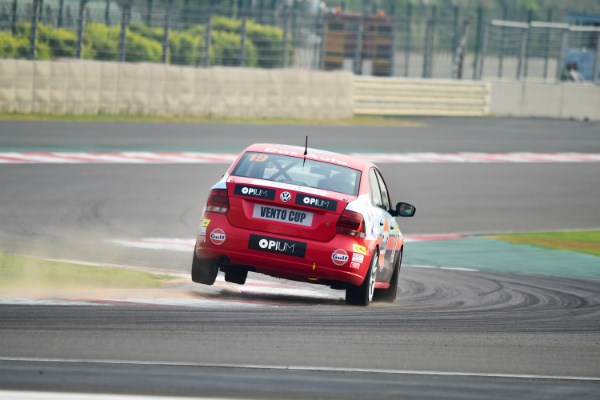 18th October, 2015: The second race on final day of round 3 was a final race. And it showed in the way the cars drove around Buddh. Edge-of-the-seat action started in the very first lap, with the top six, more so, the top two, namely Anindith Reddy(number 25) and Ishaan Dodhiwala(Number 17), pulling away clean from the rest. Lap 1 also saw a yellow flag due to a collision course between Rajeev Shrivasthava and Chewang Lama in cars numbered 12 and 5 respectively, wherein both cars had to enter the pits; Lama having had a bad weekend throughout. Lap 2 onwards, it was battle royale for the the top spot between Anindith and Ishaan. The bumper to bumper action lasted the entire duration of the race with Anindith fighting tooth and nail to remain number one, although successfully at that. Also worth watching was the fight between the crowd favourite Delhi boy, Karminder Singh and Sailesh Bolisetti in his number 19. Karminder, despite finishing third after a hard fight in his traditional bravado, was demoted to number 4 for cutting corners 3 and 4 on the circuit; Bolisetti getting pole position number 3 in the process. For a change, the tail-enders did not disappoint; Rithwik Thomas, Harkrishnan Wadia and Pratik Sonawane in cars 1, 3 and 2 respectively having their own battle in lap 6, each bearing the physical  brunt of the other two cars. At the fag end of the race, Neha Dabas had a major frontal crash into the sidewall at the last corner, hence not finishing the race. At the end of round 3,  the top 3 contenders on the scoreboard include Anindith Reddy at the top, followed by Karminder Singh and Ishaan Dodhiwala.

The Round 3, Race 3 results are as follows.