The final showdown of the Rolon FMSCI National Championship for two-wheelers saw the TVS Racing duo of P Karthik and Harry Sylvester clinching the title in the premier Group B and Group D 165cc four-stroke classes respectively. 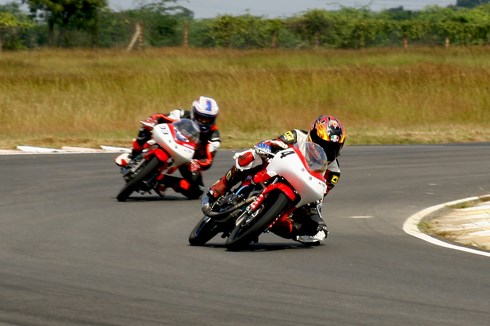 The final showdown of the Rolon FMSCI National Championship for two-wheelers saw the TVS Racing duo of P Karthik and Harry Sylvester clinching the title in the premier Group B and Group D 165cc four-stroke classes respectively. Further honours for TVS were due as K Jagan annexed the season title in the Group D 130cc class. The round had been postponed due to heavy downpour that lashed Chennai at the time. As a result, the entire round was wrapped up in a single day as the Honda one-make races were already done with on the originally intended date. The day kickstarted with upto-65cc moped races, still the grassroot of Indian two-wheeler road racing. The two races run on the short loop saw Ashok Kumar emerging ahead of the field and sealing the national title. The second race was wrapped up by S Ravi. The mopeds were followed by four-stroke upto-130cc class races, also run on the short loop. Both races saw K Jagan of TVS Racing dominating the field aboard a factory Victor, sealing the title in the process. The blue-screamer two-strokes were out next. Although the present machines are nowhere as quick as they were in their yesteryears, the aural drama they created was enough for any average Joe to stand up and take notice. A Satish Kumar emerged on top of the field in both races as he bundled the class national title. The Group D 165cc class saw both races being dominated by Sumit Lucas, who played extremely smart. Race 1 saw Sarath Kumar of Ten10 Racing lead the pack, till Lucas fought his way up, laying low before making a sudden move on the final lap. Race 2 was a repeat as Lucas hung around the mid-pack with Sarath once again leading the race. Shyam Shankar, aboard a Yamaha R15 and also in the reckoning, was unable to halt Lucas’s march as he casually passed by him in the final section of the track, which led to doubts about his engine’s technical conformity. After all, Group D encompasses factory stock engines, allowing no room for any sprucing antics. Rider weight tends to become a crucial factor in stock classes, but as Lucas smoothly passed feather-weight riders aboard similar machines, this factor lost its credibility. The scrutinisers soon had all Group D engines checked, but reportedly found no discrepancies. In the championship stakes, it was TVS Racing’s Harry Sylvester who came out tops, followed by his team-mate P Karthik ,with privateer Sumit Lucas in third spot overall. The big boys in the flagship Group B 165cc class finally roared down the track, a class dominated by factory Apaches throughout the season, and an odd privateer putting up a fight in a few rounds. However, things were different this time as the only two competitive private Group B entries — R Deepak of Libra Racing and Sarath Kumar of Ten10 Racing — experienced mechanical setbacks and were unable to compete in both the races. This left the field open for the TVS riders, with T K Vishwanath making it to the top of the all-TVS podium in Race 1, and Karthik leading his team-mates in Race 2, annexing the championship title with a victory. Harry Sylvester and T K Vishwanath took second and third place overall, ending TVS’ season domination on a perfect note. We sincerely hope that the private competitors pull up their socks for the 2010 season and put up a really worthy fight, just like the competitive scenario in international motorsport, which brings out the best in races.