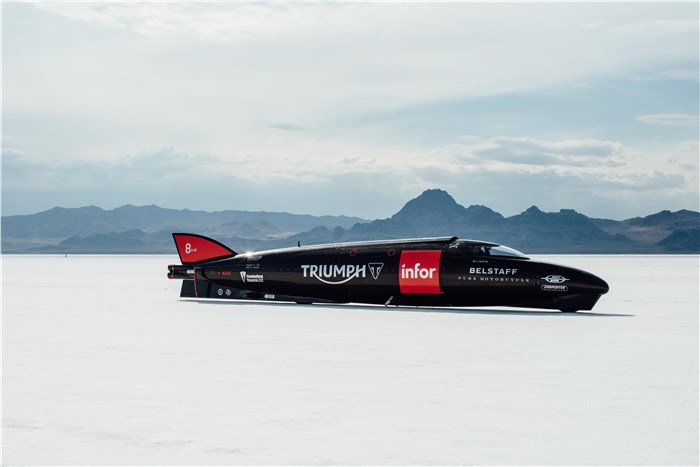 The 1,000hp Triumph streamliner and its pilot, Guy Martin, will have to wait a little bit longer to get their way into the record books. Their aim is to better the 605.697kph record set by the Top Attack streamliner in 2010. The run to set a new Word Speed Record for a motorcycle was to be held at the Bonneville salt flats in Utah towards the end of August. However, because of a change in weather conditions the run has been delayed to mid-September. However, the final go-ahead will depend on the weather conditions.

On a previous test run, held on August 9, Guy Martin set a new Triumph land speed record by averaging 441.28kph. Setting the record involves making two passes down the near 18km stretch of the salt flats. However, the top speed is recorded in one zone, known as the “measured mile”. The IOM TT racer, Martin, is building his confidence and getting familiarised with the controls as he attempts to set the World Land Speed record.

The current record is held by the Top 1 Ack Attack streamliner piloted by Rocky Robinson, who was responsible for setting a new record thrice in four years. His last record set in 2010 was astride a streamliner powered by two turbocharged Hayabusa engines generating near about 700-900hp. The Infor Rocket Streamliner is powered by two turbocharged engines from the Triumph Rocket III. Running on methanol fuel, these engines will give the Infor Rocket Streamliner over 1,000hp.