Only exhibition races this year, series to use both saloon and hatchback versions of Etios. 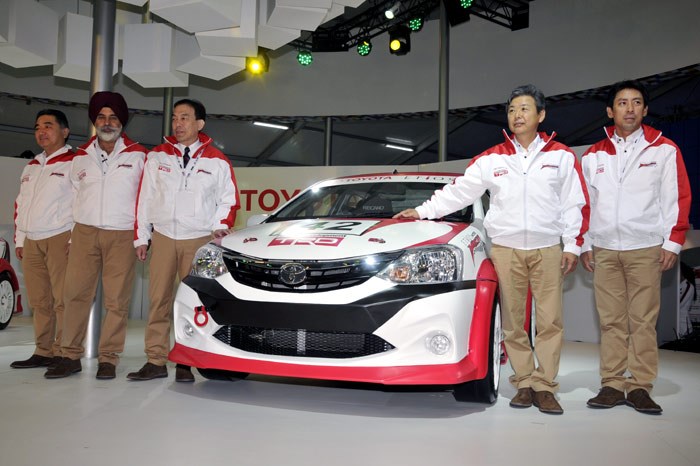 Toyota has formally launched its Indian motorsport effort under the moniker ‘Toyota Motor Racing’ by unveiling the race-prepared Etios and Liva at the Auto Expo.

Although the series was widely expected to kick off this season, Toyota plans to launch the full-fledged series only in 2013. However, a few exhibition races will be held in 2012, with the opening event just three weeks away on January 28 to be held, surprisingly, in Chandigarh. Since the city doesn’t have a purpose-built racing circuit, it is safe to assume that the race would be held on a temporary street circuit. The main series, however, will focus on the three race tracks in India - the Buddh International Circuit, the Madras circuit and the Kari Speedway in Coimbatore.

A tentative grid of 25 cars will be made up of drivers aged between 15-24 years with a multi-tiered selection process. Step one for racing aspirants would be to apply online, with entries opening January 15 and closing on February 15. Basic training camps will follow in March and June with the applicants being shortlisted based on their performance. The shortlisted lot will then go through simulator and karting evaluations before getting behind the wheel of the Toyota race cars. The final 25 will be selected and trained by specialised coaches using Toyota’s global racing curriculum.

To make the Etios and Liva cars race-worthy, both cars will undergo modifications with the process being well underway at the Red Rooster Racing facility in Bangalore. The proximity to Toyota’s Bidadi plant is no coincidence, and the process is being supervised by Toyota. Apart from the usual myriad of safety-related and aesthetic modifications, the 1.2- and 1.5-litre engines will be massaged to release more horsepower with performance suspension and wheels headlining the dynamics department. Toyota is expected to partner with MRF Tyres as the official tyre supplier for the series, drawing parallel with the only other manufacturer-backed one-make series, the JK Tyre-Volkswagen Polo Cup.