Aravind KP drops out of contention due to a shoulder injury, Santosh loses substantial number of places but continues to soldier on. 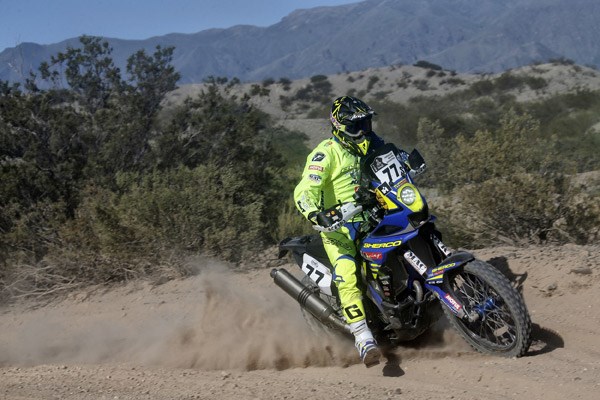 As expected, the Dakar came into its own on day three of running, with competitors covering a total of 780km including a 364-kilometre special. There was plenty of drama, up and down the order in both car and moto categories. Both classes saw new overall leaders at the end of three stages, with many favourites including Nasser-Al-Attiyah (cars) and Toby Price (moto) losing significant ground.

For the Indian contingent at the world’s toughest race, it was a rough day overall. The first piece of bad news arrived early in the day, as Dakar debutant KP Aravind was forced to drop out of the rally after a bad crash that resulted in a serious shoulder injury. The TVS Sherco rider was already nursing a hand injury from day one and Wednesday’s incident put him out of contention straightaway. He was unable to return to the bivouac due to bad weather which grounded the medical chopper that was supposed to transfer him from the hospital.

For his teammates Juan Pedrero and Adrien Methe, it was a day of salvaging the best possible result in unforgiving conditions. Pedrero, who was running inside the top ten,at the end of the previous day, lost his way in the navigational minefield in the first part of the stage. Trying to navigate while collating conflicting info in the roadbook and the real track, he crashed twice. He lost over 20 minutes in the process but was eventually able to find his footing and claw back time in the faster sections to finish 14th overall.

“It was crazy – the waypoints and track bearings [in the roadbook] weren’t coinciding and I lost a lot of time going around in circles. I also lost concentration trying to make sense of the navigation and had two crashes. But I was able to recover time eventually in the later part of the stage”, said Pedrero right after returning to the bivouac.

For Methe, there was really nothing to lose and he went all out in a bid to climb up the order from 124th position he had ended up in due to technical issues. He enjoyed a solid outing and despite suffering the same navigational issues like most others, was able to keep going and was eventually classified 68th at the end of the day.

The Hero Motorsports camp had a mixed outing as well. Day three didn’t bring in good news for CS Santosh, who suffered heavily in the navigationally-intense part of the stage and lost well over an hour. He suffered several spills which meant that he couldn’t find a rhythm and was eventually classified 56th, a nine-place drop from his previous day’s position.

“It was a crazy stage, very, very challenging to navigate – I kept going round and round several times and lost a lot of time. The surface was like talcum powder and average speeds were really low and I lost count of the crashes I had. It was hell. All I knew was that I had to keep going and get to the end of the stage”, commented Santosh later in the evening.

His teammate Joaquim Rodriguez had a good day in the saddle, despite some navigational troubles in the early part of the stage. However, he did well to make up the lost time and then some, and managed to break into the top 20, making up two places from his 22nd place classification on the previous day.

It may be looking tough but Dakar veterans know that it is just getting started. A 416-kilometre special stage awaits the competitors tomorrow, taking them from Jujuy to Tupiza in Bolivia. The temperatures drop significantly and the variety of terrain increases as well which makes it even more demanding and any mistake is sure to be penalised heavily.