The Castrol EDGE Grand Prix predictor is back

One lucky winner gets a Castrol EDGE sponsored all-expenses-paid trip to watch the Malaysian Grand Prix 2014. 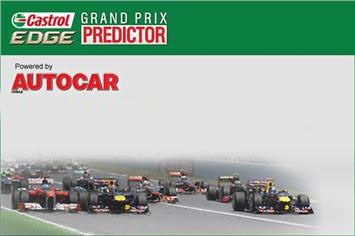 Here’s a chance to get more involved with the sport that took us by storm last season. Predict the outcome of every F1 race and earn points for every correct prediction. One lucky winner gets a Castrol EDGE sponsored all-expenses-paid trip to watch the Malaysian Grand Prix 2014.

All you have to do is register here  and pick the drivers in the order you think they will finish the race. What’s better is that our panel of experts will be making their predictions as well. So get advice and tips before every GP and compare your predictions to our experts.

There are prizes up for grabs for scoring the highest in every race, including the latest Sony PlayStation 3, scale models and subscriptions to Autocar India.

The game has some great features – you can create your very own private league and battle it out with friends, family and colleagues over 20 rounds this season or compete in the main league. You also get to pick the driver with the fastest lap during a race, the pole position and the driver with the most positions gained.

The top scorers after every race get the below prizes.

Our panel of experts:

The new name doing the buzz in motorsports circles across India is none other than the young achiever, Aditya Patel. Aditya comes from a family of racers and athletes – his own father Kamlesh Patel has been racing since 1971 and is recognized as one of India’s finest drivers. Aditya learnt to kart very soon after he learned to walk or run and his natural instinct behind the wheel is truly representative of this…he hasn’t stopped since!

Shapur is at the forefront of the magazine’s extensive road testing activities and oversees test instrumentation and data acquisition. Shapur has possibly the most experience among all road testers in the country today. An avid motorsport fan, Shapur has covered numerous grands prix over the years and knows the sport inside out.

A former rally star and the anchor for Bloomberg UTV’s ‘The Autocar Show’, Renuka is a respected face in Indian motoring circles and she has driven virtually every car in the Indian market. But her love for motoring is not limited to rallying and the shrill of the F1 cars gets her equally excited. Given a chance she would love to get her hands on an F1 car and believes she would easily be able to break her own speed record on four-wheels.

A hardcore petrol head and motorsport junkie, Sirish has been an automotive journalist for over 13 years. Sirish has won the Reliability class of the Raid-de-Himalaya and Desert Storm and twice finished second runner-up in the Group N INRC 2000cc championship. In 2013 he will compete in the brand new VW Polo rally car in the INRC built and developed by his team Slideways Industries. He is also a consulting motor sport editor for Autocar India.

Our experts are not eligible for the prizes. So go ahead, predict and win.