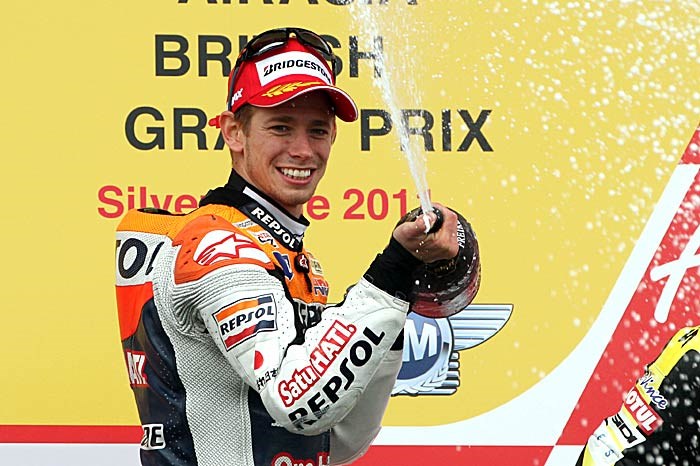 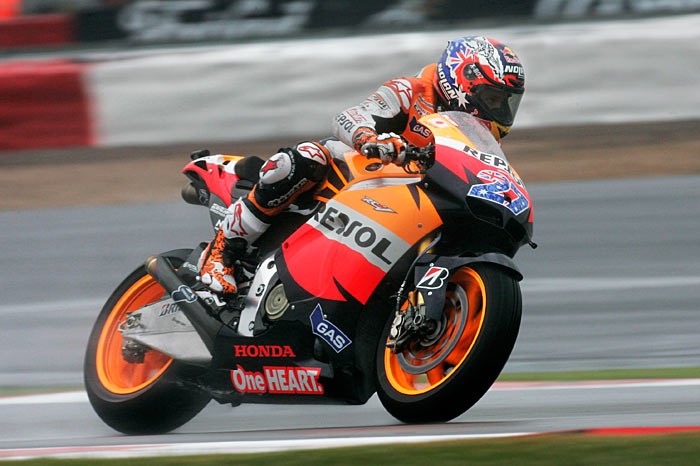 With his only title rival Jorge Lorenzo unable to start following the injuries he sustained in his warm-up crash, Stoner knew he only had to finish sixth to put the championship beyond the Spaniard's reach.

However, from pole position, the Honda rider had no intention of merely riding for points. He built a four-second lead by lap four and was in a class of his own all afternoon. Stoner's ninth win of the year - which came on his 26th birthday - gave him his first championship since 2007 and also marked Honda's first riders' title of the 800cc era.

Behind him, Nicky Hayden made a rocket start from row three to move into second place by the first corner, but the Ducati rider was powerless to keep the Honda onslaught behind him. First Marco Simoncelli came by on his Gresini Honda, and then factory riders Andrea Dovizioso and Dani Pedrosa, plus Suzuki's Alvaro Bautista, shoved him back to sixth within the first handful of laps.

Simoncelli pulled clear of Hayden and looked set for an easy second place, but was too cautious when rain began to fall with three laps to go and allowed Dovizioso to get by at Turn 12. Undeterred, the Gresini rider boldly barged his way past his countryman into Honda corner on the final lap to steal second and take the best finish of his MotoGP career.

Pedrosa, who had been right in the fight with Dovizioso, was another to back off in the rain and had to settle for fourth. Bautista was on course for fifth, but crashed when the rain came, as did Cal Crutchlow (Tech 3 Yamaha), Hiroshi Aoyama (Gresini) and Karel Abraham (Cardion AB Ducati).

With Hayden and Pramac Ducati rider Loris Capirossi pitting to switch to their wet bikes, Colin Edwards brought his Tech 3 Yamaha up to fifth by the flag, ahead of Randy de Puniet, who recovered from running on at Honda corner earlier in the race to take a season's best result on his Pramac Ducati.

Hayden was seventh, ahead of the LCR Honda of Toni Elias - the Spaniard claiming his best result of the year - and Capirossi. Valentino Rossi crashed out at mid-distance, losing the front end of his Ducati after too hot a passing move on Bautista at MG.