New Ameo racers to be over three seconds a lap quicker than the outgoing Vento Cup cars. 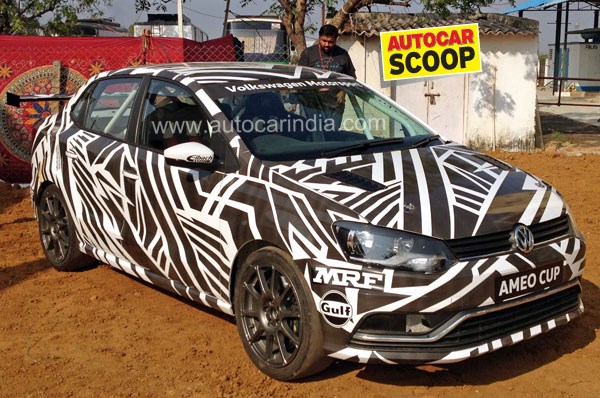 The new firepower will make the German marque’s single-make championship the fastest one-make tin-top series of all times, with the car reportedly over-three-seconds-a-lap quicker than its predecessor around Sriperumbudur Circuit in Chennai.

The Ameo Cup car will also sport a new electronics package, including launch control with upgraded running gear such as wheels, tyres and brakes.
The 1.8-litre TSI engine is one the most acclaimed powertrains worldwide and is used in a wide range of cars from the Volkswagen Group. In India, the engine powers the Skoda Octavia and the Skoda Superb. The same engine also powers the Polo GTi launched earlier this year.

The race-specced Ameo will definitely benefit from the knowhow that Volkswagen Motorsport India has amassed since 2010 when the Polo Cup was first launched. At that time, the car was powered by 1.6-litre TDI engines mated to a manual transmission. In 2012, the drivetrain was upgraded to 1.2 TSI with six-speed DSG gearbox. In 2015, the series switched to Vento cars with the same drivetrain, before moving on to its latest 'Made for India' offering, the Ameo.

Around 20 drivers are expected on the grid for the 2017 Volkswagen Ameo Cup season, which is set to kick off in June with a standalone event. Thereafter, the series will run concurrently with the MRF National Racing Championship.