Santosh pushes on despite minor incidents on day 5

Bikers like Santosh have already covered 3,726 km over the past five days and the Indian had endured a nasty fall on Wednesday. 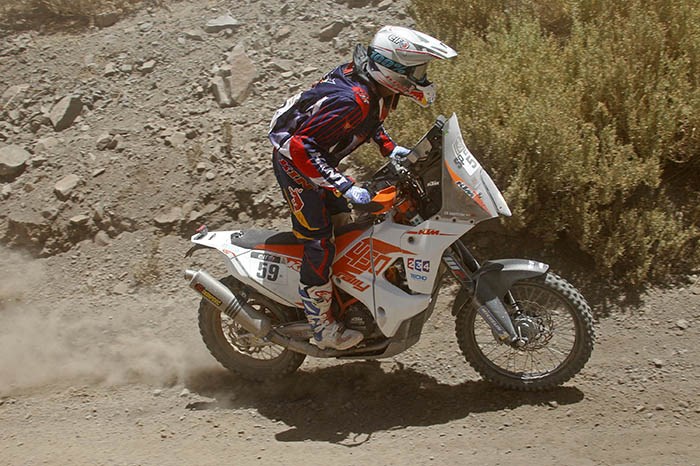 Indian rider CS Santosh continued to charge on through the toughest motorsport event on the planet as he maintained his position around the 50th place mark, ultimately being classified 51st at the end of day five.

Bikers like Santosh have already covered 3,726 km over the past five days and the Indian had endured a nasty fall on Wednesday, which broke his helmet and left him with a severely bloody nose. But Santosh didn’t let the incident hamper his rhythm on the following day and pushed as hard as he possibly could.

At the end of the day, Santosh commented, "I would rate this far tougher than the so-called longest second stage. That one had long straights where one could sit back with the throttle on, here it was on the balls of the feet all the time.

“You just could not relax. I wanted to sit many a time, as it was so exhausting but about 80% of the stage needed me to stay upright so that I could figure out the terrain ahead. It was hard work”, he added.

Meanwhile, Frenchman Alain Duclos ensured that the Sherco – TVS entry remained in contention in top ten, finishing ninth in the stage and sealing 11th overall at the end of the day.

“My arms were bothering me and under those conditions it was very difficult for me to attack without taking risks”, remarked Duclos.

His teammate Fabien Planet once again remained in the top 25, moving up a couple of spots to finish 23rd in overall standings.