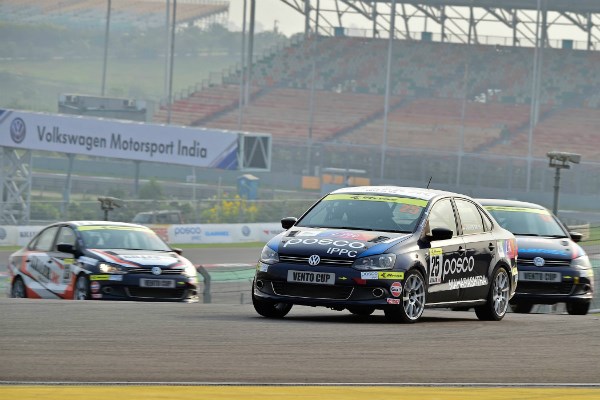 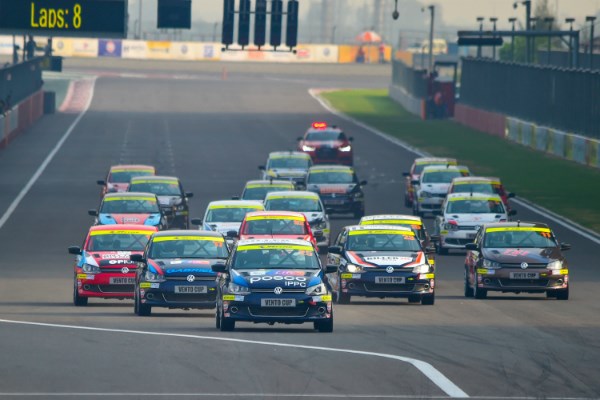 17th October, 2015: The 2015 Vento Cup began its third round with race number 5 of the season at the Buddh International Circuit, which shall also host round four. Right from the qualifiers, the top five contenders had set themselves apart from the rest, namely Anindhit Reddy Konda in car number, Shailesh Bolisetti, Ishaan Dodhiwala, Karminder Singh and Raghav Sharma. Despite the wider track at BIC, as compared to Kari Speedway – venue for round 1 and 2 – the top positions never really changed throughout the race. The race saw a red flag in the very second lap, due to a collision between Harikrishnan Wadia in his number 3 car and Amit E Mete in his number 18. Both cars, due to severe damage, withdrew from the race. After one-and-a-half laps behind the safety car, the cars restarted the race for another seven laps with a rolling start. The remaining seven laps that ensued around the 5.14km circuit, again saw little action in the top positions, with race leader Anindith Reddy only facing stiff competition from Ishaan Dodhiwala, who finished second. The Vento Cup has though, brought forward Karminder Singh as a strong and consistent performer worth looking out for; who finished 3rd in today’s race. The latter half of the race saw a little tussle for position 4 between cars 19, 22 and 15, driven by Sailesh Bolisetti, Raghav Sharma and Prabhanj Paruchuri respectively, finally clenched by Sailesh Bolisetti, winner of the Polo Cup, who hasn’t performed too well in the Vento cup.

The lower grid also remained relatively uneventful. Here are the results for round 3, race number 1.

The Buddh circuit, thanks to its 3-race weekend, should definitely give the drivers more chances to redeem themselves, as against the two-race weekend at Kari Speedway, Coimbatore. Vento cup Race number 6, the second of Round 3, shall be held on Sunday,  October 18, 2015, starting with a reverse grid.