Prasad, Mandody dominate Euro17 and LGBF4 in round 1 of JK National Racing 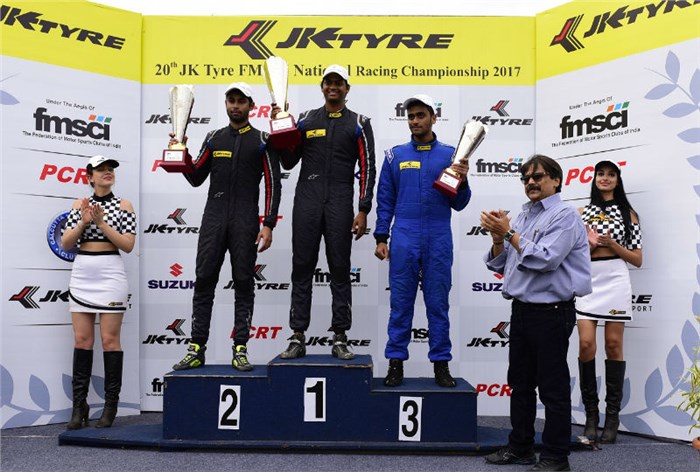 Vishnu Prasad won all three EuroJK races in round 1.

Euro JK17
Vishnu Prasad started sixth in the reverse-grid Race 3, just behind Nayan Chatterjee (P5) and Anindith Reddy (P4) who were on his tail all through Saturday.

The race commenced with Vikash Anand on pole. Anand held his position until lap 7, where he went off the track on the last corner and lost his lead to Akash Gowda and Vishnu Prasad. Vishnu went on to overtake Gowda in lap 9 and the top three positions remained unchanged. Defending champion Anindith Reddy secured a distant fourth.

Prasad, pole-sitter for the final Round 1 race, secured a lights-to-flag victory and even clocked the fastest lap of the day (1:01.246 minutes). Reddy, having started fourth, made it past two racers and secured second, closely followed by Nayan Chatterjee.

LGB F4
Race 2 of the LGBF4 started with Diljith S, Saran Vikram and Raghul Rangasamy in the lead. But by lap 4, Vishnu Prasad had found his way into third, and by lap 8, had Kolhapur’s Chittesh Mandody right behind him. Diljith and Saran crashed into each other around the same time, which allowed Prasad to take the lead, with Mandody hot on his heels. Mandody slipped past Prasad in the final lap to claim his second victory of Round 1.

Hecontinued his winning streak in the crash-fraught Race 3 of the LGBF4 class. Mandody, followed by Vishnu Prasad and Sandeep Kumar, set off to a strong start but the tail-end saw a four-car pile-up at C2 on the very first lap; the race was red-flagged and restarted. The first lap after the restart witnessed Yash Aradhya’s car number 17 crash and cartwheel into the very first corner, resulting in the second red flag and restart of the race. From there on, it was a fight between Mandody and Prasad, which Saran Vikram barged into. In lap 9, the trio dived into C1 together, with Mandody emerging just ahead of Saran. Prasad, however, passed Saran soon after to finish second, behind Mandody.

Red Bull Road to Rookie Cup
There was no shaking Sri Lanka’s Jaden Gunawardena from his pole position, as he crossed the finish line a good 3.235sec ahead of his closest challenger, Varoon S. This is the second Road to Rookies leg for the 14-year-old Chennai lad, who, like last year, impressed on the race-spec Gixxer SF. He finished just ahead of Aizawl’s Lalhruaizela.