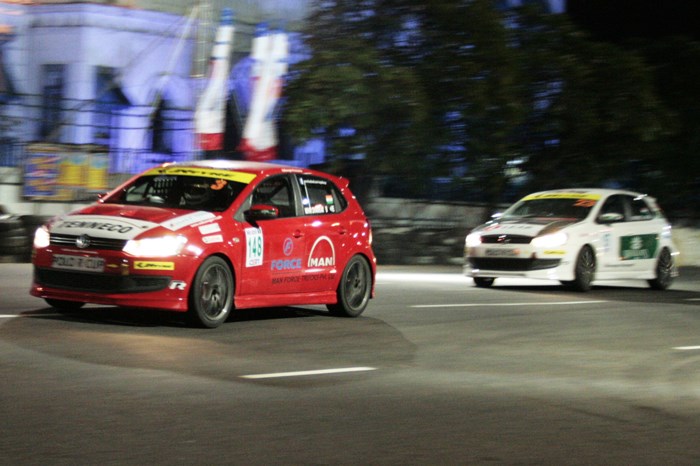 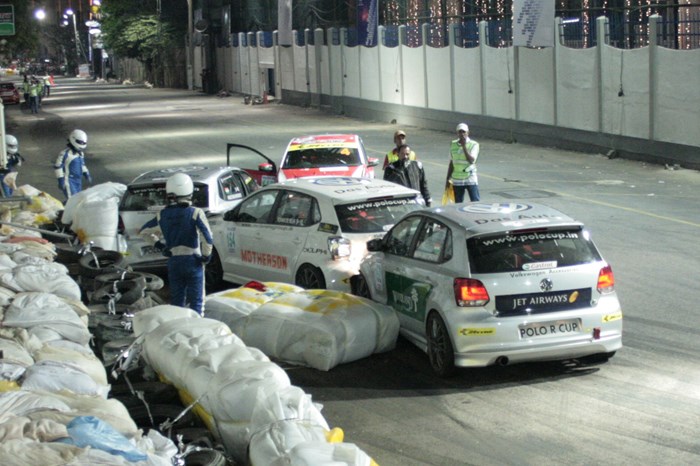 The grid for the races included 2011 championship frontrunners like Rahil Noorani, Avdumber Hede, Munjal Savla, Mihir Dharkar and otherswith 2011 Super Saloon champion Raj Virdhan in the mix as well. Apart from three Sri Lankan guest drivers, Scirocco Cup ace Aditya Patel also featured on the grid. However, a technical issue with the timing transponder meant he was unable to set a time in qualifying and was left to start the first race from the back of the grid in tenth.

In race one, pole sitter Munjal Savla went on to complete a dominating pole to flag victory, with Mihir Dharkar a distant second. Sri Lankan guest driver Rohan De Silva went on to complete the podium, while Patel got up to fourth place after putting in another one of his charging drives he became well known for during his Scirocco campaign. He showcased patience and persistence in equal measure as he picked his victims one at a time and dispatched them with clinical precision.

The second race was more action packed than anyone including the drivers had bargained for. With the top four finishers being reversed for the grid, Patel was on pole this time with De Silva alongside while Savla and Dharkar shared the second row.Patel managed to hold good his advantage at the start but the field got shuffled behind him, and it was Dharkar who emerged as Patel’s leadchallenger.Some distance behind, the pack consisting of Savla, Noorani, Raj Virdhan, and Di Silva was vying for the same piece of tarmac.In a failed bid to unsettle Noorani’s rhythm, Savla ran wideat the exit of turn three, brushing the barrier. The ill-placed foam barrier sent Savla’s car rebounding after pitching it sideways in a way that it ended back on the racing line.

Noorani had managed edge away clean but the four-driverpack behind weren’t as lucky and a series of sickening thuds in quick successionleftAngad Matharoo, Raj Virdhan, De Silva and Sourav Bandyopadhyay in a four-car pileup, but thankfully no one was hurt.

Following the red flag, the race was restarted about 30 minutes after the damaged cars and debris was cleared and this time it was Dharkar who got the jump on Patel, and the two put on a great racing duel for the remaining lapswith Dharkar defending heavily and sometimes outbraking himself at turn two.However, he strategically occupied parts of race track which left Patel with no scope of overtaking despite being quicker in some parts. As the flag fell, it was Dharkar from Patel, followed by Avdumber Hede in third place – having been in close attention of the leading duo for the entire race.

There was little to expect when the night races were first announced but after looking at enthusiasm for racing in the country – with massive participation in all categories from Mini Coopers to motorcycles to GT3 super cars and single seaters. Even though it isn’t fair to compare a new start-out event like this to classics like Monaco or even Macau as far as history and racing standards go, aspiring to similar levels of safety standards isn’t too much to ask for. The weekend was marred with avoidable incidents like the Polo-pileup that could’ve been prevented by better marshalling and a more modern safety measures.

However, there was no denying the enthusiasm of the crowd, which was doggedly occupying the stands right from 9pm to the crack of dawn – showing that there is great potential once few key things can be turned around.After all, the narrow confines of anystreet circuitprovide a unique auraand challenge that vast realms of a race trackare seldom able to match!