Oliveria and Vazquez for Mahindra in 2013

The all-new Spanish-Portuguese lineup will take up the team's challenge for next year. 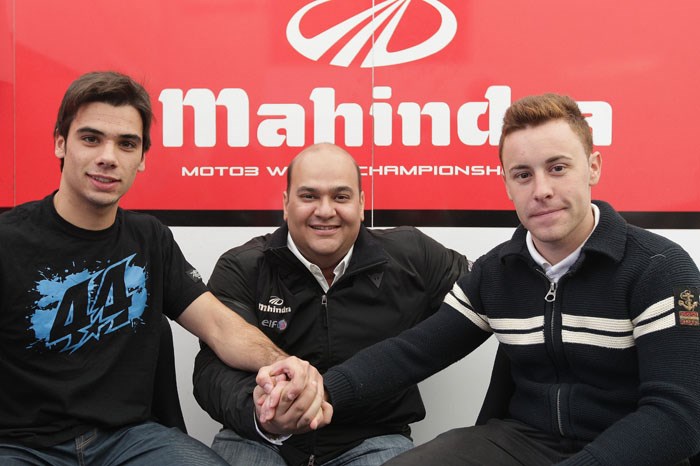 Mahindra Racing has confirmed its riders for the 2013 Moto3 season with experienced Spaniard Efrén Vázquez teaming up with Portuguese teenager Miguel Oliveira.

The signing comes on the back of a new technical partnership with established Swiss firm Suter Racing Technology AG for the development of a new Moto3 challenger for 2013.

The team has also announced that it will also move from its current Italian base to Switzerland for 2013 and introduce a number of new and experienced personnel and is hoping that this restructuring will pay dividends.

“We are in the process of implementing strategic changes we had planned for next year and so far the outcome has been excellent” said Mr S.P. Shukla, President, Group Strategy and Member of the Group Executive Board, Mahindra Group.

“MotoGP plays an important part in our wider business strategy as a leading player in the field of mobility from 2Wheelers to Cars to Sports Vehicles and is also a vital test bed for future technological development.

"We are committed to success in the series and the announcement that these two talented young riders will join Mahindra Racing underlines this.”

The experienced Spaniard was excited at the prospect of joining the Indian team for 2013.

“Mahindra has shown some real commitment to the sport and I was impressed by their plans.

"I am looking forward to working with the team and we are aiming to make the new bike into one of the top machines in Moto3”, he revealed.

“Having an Indian company involved in MotoGP is great and so I am very pleased to join this project,” added Miguel Oliveira.

“Mahindra Racing has enormous support in India and I want to help them achieve their goals. I know there will be challenges ahead, but I am confident and very excited about 2013.”