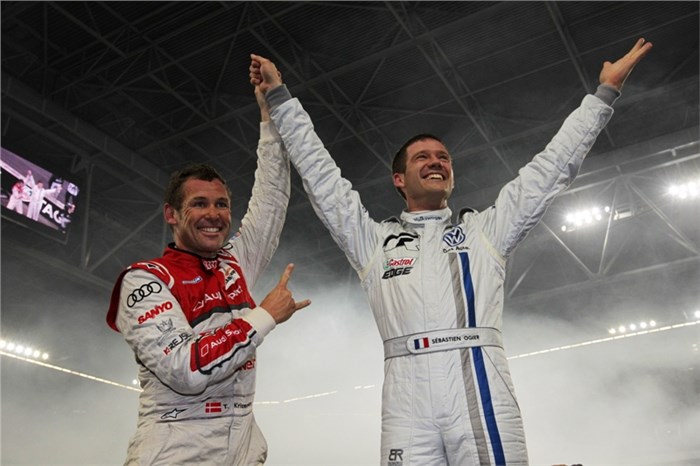 Sebastien Ogier won the Race of Champions with a comprehensive 2-0 victory over Tom Kristensen in the final at Dusseldorf's Esprit Arena.

The 27-year-old Frenchman, who earlier this month signed to head Volkswagen's return to the World Rally Championship in 2013, was in imperious form and lost only one of his seven head-to-head encounters all afternoon.

After beating DTM champion Martin Tomczyk in Audi R8 LMS GT3s to make it into the final, he triumphed over Le Mans legend Kristensen in both RoC buggies and then the Audis again to take the outright prize.

He becomes the third Frenchman to win the RoC, joining Didier Auriol and Sebastien Loeb.

Ogier said: "I'm so happy. It's been a very nice weekend and a lot of fun to drive here. It's amazing, especially to win against Mr Kristensen, who has so much experience."

His opponent Kristensen put out Michael Schumacher in the semi-finals, the Dane coming from behind at the halfway point to beat the seven-time Formula 1 world champion by just 0.018s in KTM X-bows.

Schumacher triumphed in a battle of the heavyweights in the quarter-finals, putting out F1 world title holder Sebastian Vettel in RoC buggies, while former F1 champion Jenson Button also exited proceedings at this stage, the McLaren driver put out by Kristensen in X-bows.

The group stages produced an immediate shock as defending RoC champion Filipe Albuquerque went out without a single race win. The DTM driver was unfortunate to suffer an engine problem in his Audi R8 LMS during his opening encounter against Travis Pastrana, but still finished bottom of Group A.

Pastrana also went out as Priaulx and Coulthard progressed; the BMW GT driver going through with a perfect record.

There was another surprise in Group B as three-time RoC winner Mattias Ekstrom was eliminated. The Swede finished third in his group and went out along with Jan Kopecky, while Ogier and Tomczyk progressed.

Schumacher was the only driver other than Priaulx to maintain a 100 per cent record through the group stages, the German closing out proceedings with a win over Button in the FJV8s while Juho Hanninen and Brian Deegan were eliminated.

X-games legend Deegan had one of the most incident-filled afternoons, suffering a jumped-start penalty and two spins in X-bows against Schumacher, and then being hit with another penalty in FJV8s against Hanninen.

The most closely-fought contest came in Group D. As Kristensen and Vettel prepared to face off in Skodas in the final race, each knew that a victory would be necessary to ensure progression.

Kristensen won, sealing his spot in the last eight, but Vettel's losing time - his best of the night at that point - was 0.5s quicker than Romain Grosjean's, meaning that with the pair tied on two wins each, it was the German who went through on times.