The Japanese manufacturer confirmed the first technical details of the radical GT-R LM NISMO that will take part in the World Endurance Championship. 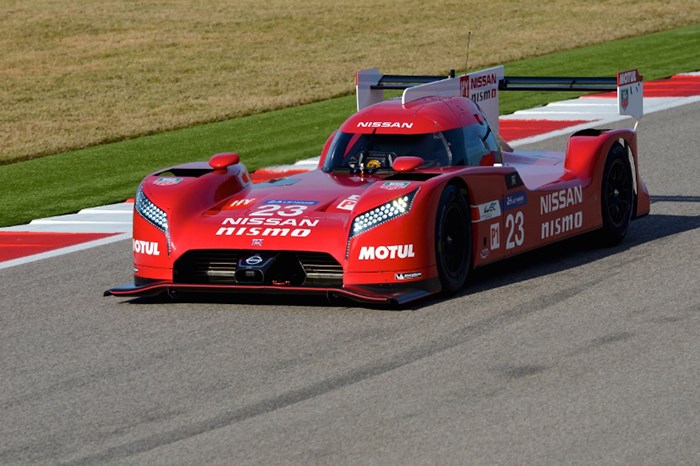 The Japanese manufacturer confirmed the first technical details of the radical GT-R LM NISMO that will take part in the full World Endurance Championship with a TV commercial shown during the NBC broadcast of the American football end-of-season Super Bowl and a simultaneous virtual launch.

Ben Bowlby, technical director of the GT-R LM project, said that the LMP1 regulations introduced ahead of last season's WEC had allowed Nissan to "turn the whole concept of the conventional LMP1 car of 2014 on its head".

He explained that the revolutionary concept with a three-litre twin-turbo V6 ahead of the driver had been devised to take maximum benefit from the energy retrieved from the car's front-axle kinetic hybrid system.

"It's all about how fast you release the energy — think about a stick of dynamite," he said.

"We want to release the energy very quickly to get the car back up to speed very quickly because it's nice to spend lots of time at high speed.

"The key is to store the energy and then release it very quickly and that's what makes our system very competitive, providing us with a good amount of power from the ERS, which we can add to the internal combustion engine's driving power."

The front-engined concept has allowed Nissan to move the weight bias forward in order to maximise traction.

That explains why the GT-R LM runs the same 14-inch wide Michelin tyres of its rivals at the front, but has nine-inch tyres at the rear.

"This is due to the way that mass is distributed in the car," continued Bowlby.

"We have moved the weight bias forwards to give us traction for the front-engined, front-wheel drive and we've also moved the aero forwards so we've moved the capacity of the tyres forward to match the weight distribution.

Nissan is aiming to run in the highest of the four LMP1 sub-classes, which allows for eight megajoules of energy to be returned to the track over the 8.47-mile lap of Le Mans.

"The more megajoules you have the faster you go," said Bowlby.

"The challenge is to package a big, powerful energy recovery system without going over the weight limit and that is very hard to do."

Nissan has yet to announce how retrieved energy is stored, but it is understood that it is a flywheel system.

The GT-R LM began testing at Nissan's Arizona test facility in November and has subsequently undertaken two tests at the Austin track in Texas.