MotoGP: Crutchlow wins at Phillip Island as Marquez crashes out 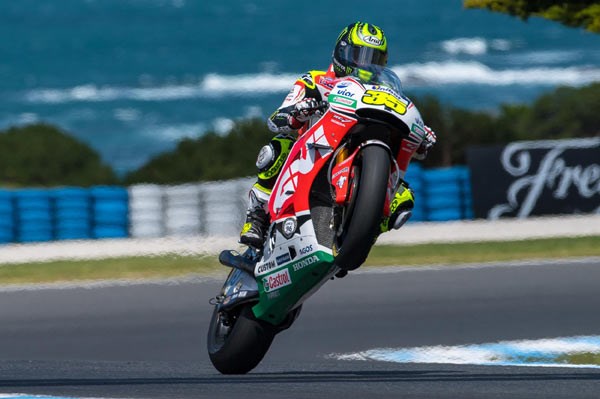 Cal Crutchlow claimed his second career MotoGP victory in the Australian Grand Prix, as Marc Marquez crashed out of the lead and Valentino Rossi charged from 15th to second.

Polesitter and newly-crowned champion Marquez looked to have the race in control, building an early gap of nearly three seconds. Crutchlow eventually wrestled second place from Suzuki's Aleix Espargaro and Tech3 Yamaha's Pol Espargaro on lap six, and took 0.7s out of Marquez's lead over the next three laps. The Spaniard responded with his personal best lap of the race, but then crashed at Phillip Island’s Turn 4, losing the front end of his Honda on lap 10. Just seconds earlier, Rossi had taken second place from Aleix Espargaro at Turn 1 and, having started 15th, was 1.803s behind new leader Crutchlow.

From there, though, Crutchlow was untouchable. He lapped relentlessly in the 1m29s barrier to gradually build his lead over Rossi to more than three seconds for the first time with 12 laps remaining. He continued to extend his advantage and a mistake by Rossi at Turn 4 two laps later meant it became a seemingly-unassailable 5.589s. There was no change at the front, and Crutchlow eventually won by 4.218s.

For the bulk of the race, it looked like Espargaro would complete the podium. However he was reeled in by Ducati's Andrea Dovizioso, and having resisted that charge was then caught by his Suzuki teammate Maverick Vinales, who had moved up the order from 13th. Vinales moved past Dovizioso and looked set to fight for third, until Espargaro came unstuck at Turn 4 with five laps to go. Meanwhile, Pol Espargaro crossed the finish line in fifth place.

Jorge Lorenzo made good progress early, jumping from 12th up to eighth on the first lap, but was passed by Rossi on lap four and his progress thereafter was non-existent. The outgoing champion finished a lonely sixth, losing ground to his team-mate in their fight for second in the championship.

Scott Redding won what was a mammoth, seven-rider fight for seventh, on his Pramac Ducati. In his second start after an injury layoff, Tech3 Yamaha's Bradley Smith snatched eighth over the line from Redding's team-mate Danilo Petrucci while local Jack Miller completed the top 10.