Schumacher has been tipped to deliver more podium finishes by his Mercedes team bosses. 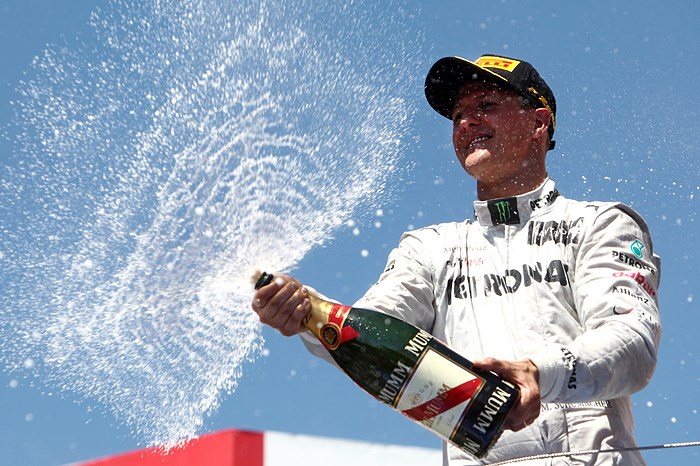 Michael Schumacher has been tipped to deliver more podium finishes by his Mercedes team bosses, but they insist his Valencia achievement does not change the timetable for sorting out his future.

The seven-time champion turned the corner on a frustrating run of reliability problems this season to charge through the field in the European GP and finish behind race-winner Fernando Alonso and runner-up Kimi Raikkonen. It was the first time that Schumacher has finished on the podium since he returned to F1 at the start of 2010, and Mercedes motorsport boss Norbert Haug reckoned that the result was vital going forward.

"It is important and more podiums will come when we give him the car he needs in terms of speed and reliability," Haug said in an exclusive interview with our sister magazine Autosport.

"His lack of results this season are not down to the driver, and in fairness to him he could have definitely had in excess of 60 or 70 points if we would not have had technical issues - which would have been good for him and good for us in the constructors' championship. We did not get it because we got it wrong.

"But I think we have the right to push, and if you push you are more in the risk zone than if you are slower and reliable. So in the third year we are still learning. But considering we have quite a limited budget compared to the others, all in all the job we have done and the direction is good."

Schumacher had scored just two points this season before the European GP, having seen good results in Australia, China and Monaco slip from his grasp through no fault of his own. Yet with his growing competitiveness pointing towards him electing to sign a new contract with Mercedes, Haug says that plans to wait a while before sorting matters out are unchanged.

When asked if the podium altered the timetable for sorting out the future, Haug said: "No, not really. It is a separate story and we will talk later about it with him.

"We should not be described as being over the moon, but scoring 23 points in Valencia [with Schumacher and Nico Rosberg] is a good result."

He added: "Michael is a great sportsman, and this is even more demonstrated in his second career that he is really open, and open to critical questions. He is a really balanced guy, and a guy who everybody who could look up to because he did not criticise us, did not make any public noises, and he was genuinely pleased in Valencia.

"He could have said: 'I won 91 races, why should I be happy?' But he was genuinely pleased and it was wrong to say it was inherited. With one lap to go he was fifth, but I can tell you a lot of stories where he was fifth and things went against him. What we could see in Valencia was that the genuine speed was there."