McLaren launches its MP4-25 Formula One car that will be driven by Button and Hamilton. 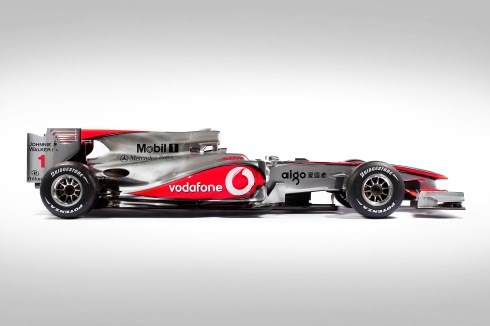 McLaren has launched its new MP4-25 Formula One car that Jenson Button and Lewis Hamilton will drive this season. The British team will be competing with the two most recent world champions in its ranks, the first time this has ever happened in F1 history.

"During the development of MP4-25, we set ourselves some very high targets - and I'm enormously pleased with the way our designers and engineers have tackled the approach to the new car," said team boss Martin Whitmarsh. "The new regulations have obviously had an effect on the car's appearance, with the much higher-capacity fuel tank looking more striking than before.

"But we're pleased with a number of solutions we've been able to bring to the car, and I think we're cautiously optimistic that, after the experience of last year and, in particular, the momentum we gathered in the second half of the season, we'll have a competitive car for both Jenson and Lewis."

McLaren's managing director Jonathan Neale said the team's sole aim was to win both world championships due to the driver talent at its disposal.However, Whitmarsh held off from saying the car would be good enough to help Button defend his world crown, or Hamilton regain it.

"Is it a championship contender? It's still far too early to say," he said. "Will it win races? We certainly hope so. Am I proud of the effort we've currently invested in the car? Most definitely."

Jenson Button said he already felt like an integrated part of the team. "In my brief time here I feel I've become part of the team," he said. "I really sense the start of the last year makes McLaren hungrier for success this year. I've spent a lot of time in the simulator which has allowed me to work with my engineers. This is the hardest part of my change, getting to know my new colleagues."

Lewis Hamilton said the team had been very accommodating towards Button and he was looking forward to competing against him. "We've been very welcoming to Jenson," he said. "I've spent some time working on the car now and am proud of my input on it. Hopefully we can add some more input and have a great year."