Montezemolo is stepping down as chairman, Ferrari, after being at the organisation for 23 years. 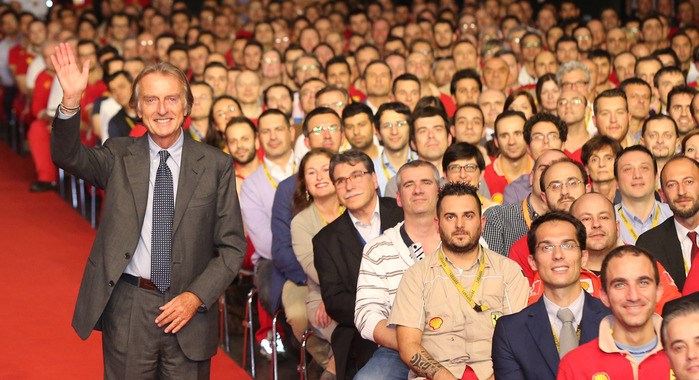 "It's not easy...", said Luca di Montezemolo in his farewell speech to his colleagues at Ferrari's GT division.  Two thousand people gathered in a large marquee at the factory to listen to Montezemolo.

Ferrari GT employees have been seeking an opportunity to meet Montezemolo individually in the past few days, before he leaves the organisation after 23 years. Although he couldn't spend time with each employee individually, he addressed them as a group, having already spoken to the Gestione Sportiva Formula 1 Division before the team’s departure for the Japanese and Russian Grand Prix.

In his address, he told the Maranello employees, “You are the power behind Ferrari, the most beautiful company in the world. You are the real architects of its triumphs. You are Ferrari.”

He recalled the marquee’s triumphs in Formula 1,  as well as the success of the Prancing Horse’s GT cars the world over. Montezemolo also told the assembled workforce that he was “proud to have lived these marvellous years with you”. He reiterated that he was certain “the future for Ferrari, which builds not cars but dreams, will remain bright because all of you are here.”

He also spoke about ex-Ferrari F1 champion Michael Schumacher, who is recovering from a life threatening accident, and Marussia's Jules Bianchi, who is fighting for his life after a freak crash at Suzuka.

After his address, some of the employees joined him on the stage for a symbolic embrace, and there was a huge crowd of admirers waiting to shake his hand and share a word, as he left.