Lewis on pole for Hungarian GP 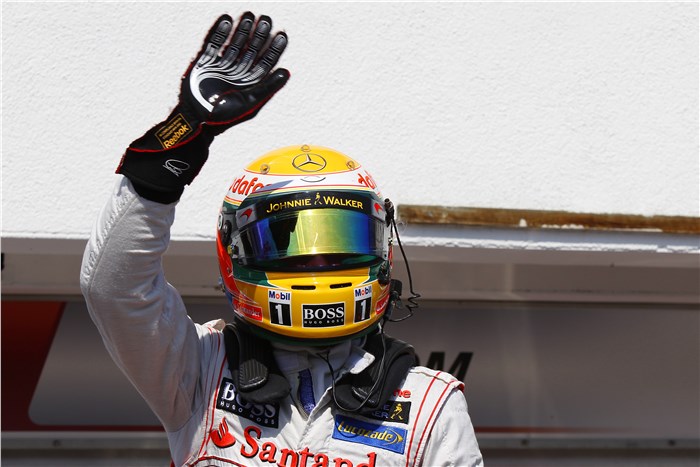 After a dominant performance in qualifying at the Hungaroring GP, Lewis Hamilton secured McLaren's 150th pole position in F1. Lewis set two laps good enough for pole position as he underlined his control of proceedings by dipping into the 1m20s on his final Q3 lap.

That was easily enough to earn him a third pole of the year, with Lotus' Romain Grosjean - setting his fastest time at the flag - more than four tenths down in second. Red Bull's Sebastian Vettel threatened to disrupt Hamilton's momentum late on in Q3, only to lose time in the final sector. He will nevertheless start from third, alongside Jenson Button in the second McLaren.

Kimi Raikkonen will start from fifth alongside championship leader Fernando Alonso, with Felipe Massa fractions away from out-qualifying his team-mate for the first time this season. Williams Pastor Maldonado, who appeared to be held up slightly behind Hamilton in the final session, was the last man to get within one second of the Briton's time, leaving him eighth. On his first appearance in Q3, Bruno Senna sealed ninth, with Force India's Nico Hulkenberg 10th. Senna just snuck into the final session, eliminating the second Red Bull of Mark Webber in the process.

Webber was left vulnerable when he failed to improve on his final Q2 lap, leaving him ninth with one minute of the session to run. That became 10th when Force India's Nico Hulkenberg came round, before Bruno Senna consigned Webber to an early exit as the flag fell.

Mercedes also endured a torrid qualifying, failing to break into Q3 with either car for the first time in 2012. Michael Schumacher couldn't recover from several wild moments and will start from 17th, with Nico Rosberg four places ahead of him in 13th. The pair were separated by the Sauber duo of Sergio Perez and Kamui Kobayashi and Toro Rosso's Jean-Eric Vergne. The latter had sparked a mad Q1 scramble when he switched onto soft rubber and jumped up to fourth, forcing most of the field to follow suit.

As the laps played out Red Bull appeared to be in trouble but the team was ultimately able to tell both drivers to ease off as the scrap for the final Q2 place boiled down to Kobayashi and the second Toro Rosso of Daniel Ricciardo - the Australian eventually losing out.

He will start ahead of the Caterhams of Heikki Kovalainen and Vitaly Petrov, with the Finn almost six tenths clear of his team-mate. A further second down the road Marussia's Charles Pic got the best of team-mate Timo Glock, the duo starting ahead of the HRTs of Pedro de la Rosa and Narain Karthikeyan.