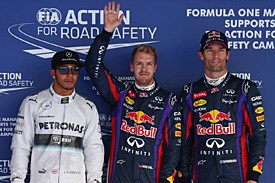 Practice had suggested that Mercedes would be able to give Red Bull a much harder time in qualifying at least at Yeongam.

But in the event Sebastian Vettel's initial Q3 lap of 1m37.202s put him 0.308 seconds clear of the leading Mercedes of Lewis Hamilton.

That lap had put Hamilton in third behind the second Red Bull of Mark Webber.

Although Hamilton was able to get ahead of the Australian on his final pole shot, he was still 0.218s adrift of Vettel, who was able to back off his own last lap, confident pole was secure.

Webber also abandoned his final lap and stayed third in the times, which will become 13th on the grid when his 10-place grid penalty for accumulating three driving reprimands is applied.

That will elevate Romain Grosjean to third, the Lotus driver having outpaced the second Mercedes of Nico Rosberg and Ferrari duo Fernando Alonso and Felipe Massa.

For the first time this year, Sauber got both cars into Q3, with Nico Hulkenberg and Esteban Gutierrez eighth and ninth quickest.

Despite encouraging signs in practice, the silver cars found themselves back in 11th and 12th, with Sergio Perez and Jenson Button missing Q3 by just 0.035s and 0.038s respectively.

The Toro Rossos and Force Indias were also eliminated in Q2, while neither Williams made it beyond Q1, although Valtteri Bottas could at least be pleased to outqualify Pastor Maldonado by half a second.