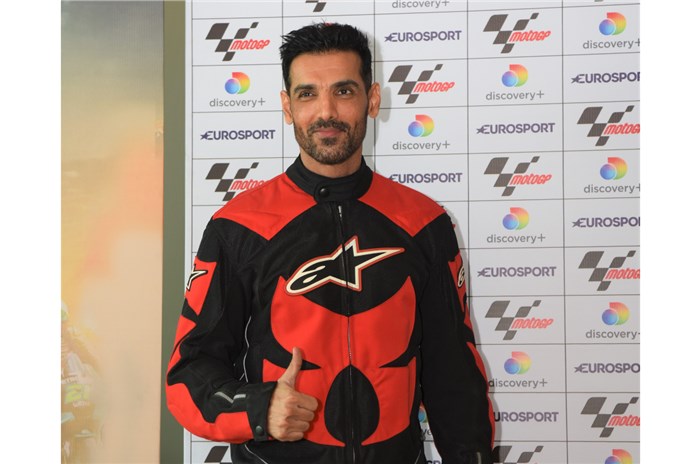 Eurosport India has signed on the actor to promote MotoGP in India via multiple platforms and reach a wider audience.

In a bid to further push the popularity of MotoGP in India, Eurosport has announced John Abraham as the championship’s India ambassador.

As an avid biker and MotoGP enthusiast, Abraham’s signing appears to be the perfect fit and he’ll be involved in a number of projects to promote the championship in India.

Vijay Rajput, head of Eurosport India, pointed out that, despite India being a major two-wheeler market, a majority of the population hasn’t been exposed to championships like MotoGP. “Indians across the country love superbikes and racing but motorsports is still very community focused, concentrated at certain pockets,” he said.

India’s growing prominence as a major market for superbikes resulted in Yamaha joining as a co-presenting sponsor for MotoGP. But with Abraham now on board, Eurosport is hoping to reach out to a far wider audience.

“Through this power packed campaign‘MotoGP, Race Lagate Hain’we at Eurosport India, along with MotoGP fan John Abraham, aim to expand its reach across the length and breadth of the country, also fuelling more conversations around the thrill and competitiveness of the sport,” Rajput added.

Need to push motorsport at the grassroots – John Abraham

On his part, Abraham is hoping he’ll be able to help the everyday Indian understand the fine nuances of a highly technical sport like MotoGP: “It’s a moment of pride for any fan to become the India Ambassador, and it’s indeed a moment of reckoning for me. I am glad that through this association not only will I be able to showcase my love for MotoGP to all motorsports fans but also help many others understand the fine nuances of a highly technical and skill-oriented sport.”

“I am confident that my association with Eurosport India is only going to bring the sport of MotoGP closer to the hearts of millions of Indian motorsport fans,” he added.

When asked by Autocar India about what he thinks needs to be done to give motorsport a bigger push in India, Abraham had a simple formula – focus on the grassroots. “I own a football team and I think the best way to push football is through grassroots, and I think the same goes for motorsport. You need to start at the grassroots, you need to have young riders coming out of those grassroots academies into Asian races and then international races. That’s the only way it’s going to work,” he said.

The MotoGP promotion campaign with John Abraham will be carried out across multiple platforms, including digital and radio. Eurosport India is also giving fans the chance to win merchandise signed by John Abraham.

After a brief summer break, the 2021 MotoGP championship is back this weekend with the Styrian GP.