Sebastian Vettel cruises to his fourth win in a row in the Indian GP. He now leads Alonso in the championship by 13 points. 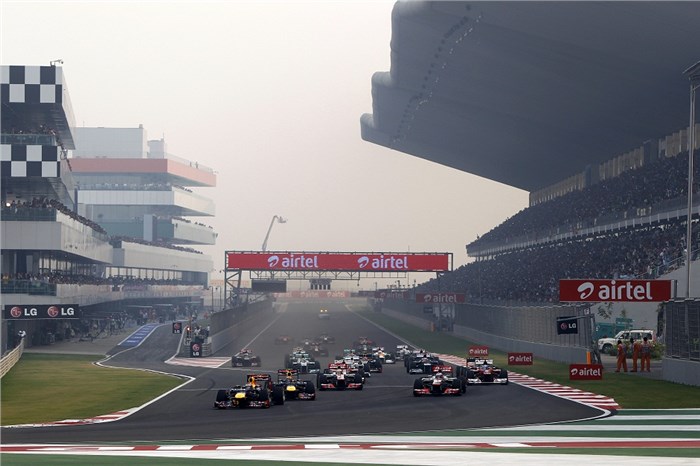 Fernando Alonso was at least able to minimise the damage to his title bid by battling through to second place.

Red Bull's rivals may have claimed pre-race that they were determined to prevent Vettel making a clean break, but the champion team looked more dominant than ever on lap one, as Vettel and Mark Webber cruised away while the McLarens and Ferraris grappled with each other.

Alonso managed to drift past both Lewis Hamilton and Jenson Button on the long straight, only to see them overtake him — from either side — at Turn 4.

Button came out best and took third, with Alonso managing to get back past Hamilton into fourth.

Alonso then overtook Button for third as soon as DRS was available. Hamilton did likewise soon afterwards.

Third looked like being Alonso's limit until the second half of the race, when Webber began drifting off Vettel's pace and into the Ferrari's sights.

As Webber reported a lack of KERS, Alonso stepped up his chase — despite also having to try to save fuel.

The Ferrari breezed past with 10 laps to go, and — encouraged by some unusual sparks from under Vettel's car — kept pushing to the chequered flag. It was in vain, though, as yet again Vettel was safely headed for victory.

Hamilton, who required a rapidly-fitted new steering wheel at his pitstop, charged onto Webber's tail in the final moments but failed to replace the Red Bull on the podium.

Button was a lonely fifth, losing time with a long spell behind a yet-to-stop Romain Grosjean.

Felipe Massa resisted Kimi Raikkonen for sixth. The Lotus jumped the Ferrari by pitting one lap later, only for Massa to use DRS to immediately re-pass.

Grosjean fell into the midfield at the start, then recovered with some successful overtaking and by running until lap 36 before pitting for fresh softs.

The Lotus got back up to ninth, chasing Nico Hulkenberg's Force India.

Hulkenberg had initially sparred with Sergio Perez, but the Sauber made an early pitstop then retired after picking up a puncture while jousting with Daniel Ricciardo's.

Perez was one of three drivers who sustained tyre damage in combat. Jean-Eric Vergne tagged Michael Schumacher at the first corner of the race, breaking the Toro Rosso's wing and slicing the Mercedes' tyre.

Pastor Maldonado also got a puncture in a tussle with Kamui Kobayashi. But Bruno Senna saved Williams's day with an assertive drive to 10th that included a late pass on Nico Rosberg's Mercedes.