Red Bull dominated the second practice session with Sebastian Vettel ahead of Mark Webber by 0.118s. 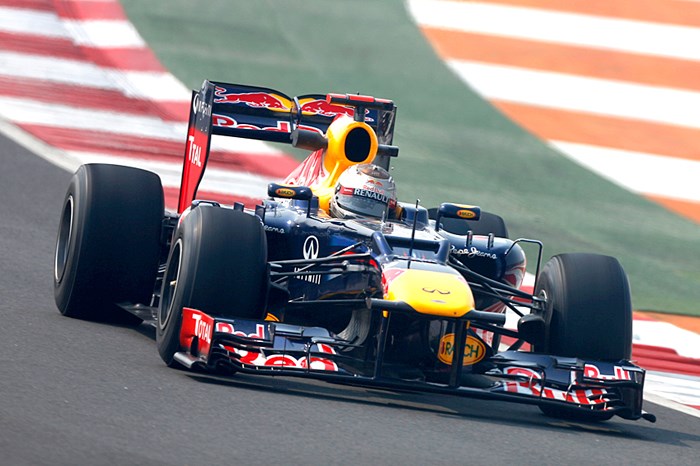 Red Bull dominated the second practice session even more emphatically than it did the first in India, with world championship leader Sebastian Vettel ahead of Mark Webber by 0.118s.

The German's best time of 1m26.221s was 0.6s faster than his world championship rival Fernando Alonso could manage in the third-placed Ferrari, though the Spaniard would have taken heart from the F12012's apparently strong race-pace late in the 90-minute run.

The track lost some of the adhesion the field worked so hard to build in through the first session, so the early minutes of FP2 were marked by several names jumping to the front as the track improved all over again. All the usual suspects, including Jenson Button, Vettel, Alonso and Lewis Hamilton had spells at the top of times in the first 20 minutes before things settled down.

When they did, it was Alonso who emerged as the fastest initial hard tyre runner with a lap of 1m27.402s, some 0.246s faster than Vettel, with Hamilton third. Intriguingly though, Alonso would ultimately end up quickest with the silver-painted tyres. Massa spun at Turn 11, 20 minutes in, after taking liberties with the Astroturf on the inside. That damaged his hard set and prompted him to become the first of the frontrunners to switch to the yellow-walled soft option tyre. Lotus's Romain Grosjean suffered a similar mishap.

Half an hour in and Vettel was back in front, having set a 1m27.256s lap, ahead of Alonso and Hamilton. Bruno Senna, having also spun at Turn 4, was an impressive fourth at the time given his lack of running in the morning.

Kimi Raikkonen was next to switch on to options, along with team-mate Grosjean and the Toro Rossos, so it was perhaps no surprise that the Finn found himself at the top of the pile halfway through the session with a time of 1m27.030s.

Meanwhile, Massa spun again at Turn 9, complaining of 'a very strange balance' in the car. That pretty much curtailed his running for the day as Ferrari reported damage to both his sets of tyres and set about discovering the source of the Brazilian's misery. As Massa was rotating, Nico Rosberg, also on options, shot to the top in the Mercedes with a 1m27.022s. But that didn't last long as first Vettel, on soft, and then Alonso, still on hards, moved ahead.

At the turn of the hour Webber finally made it out on track after a lengthy period in the pits and immediately went to the top of the times himself with a 1m26.399s. But only for mere moments until Vettel responded again with a 1m26.221s.

With only 30 minutes of Friday's practice left, Red Bull had a laptime advantage of 0.4s over Alonso and the chasing pack. The Spaniard, however, was consistently quick in his soft-tyre longs runs too. Red Bull was also strong, delivering low 1m33s similar to that of Lotus. But Alonso's Ferrari and Hamilton's McLaren were in the 1m32s, although fuel loads were apparent.

Behind Alonso in the times, separated by 0.008s were Rosberg and Raikkonen, while the fastest McLaren was that of Hamilton, who was nearly a second down on Vettel. Button was seventh fastest ahead of Force India's Nico Hulkenberg, with Grosjean and Senna completing the top ten. Paul di Resta was 11th fastest ahead of Sergio Perez, who was back in his Sauber for the second session, having handed it over to Esteban Gutierrez for FP1.