Indian contingent continues charge as Dakar gets closer to finish

Sherco-TVS rider Metge impresses as Hero’s Joaquim Rodrigues loses ground to drop out of the top 10. 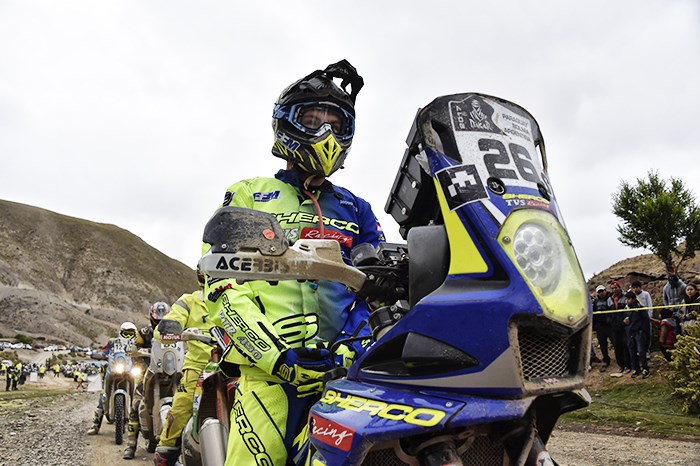 Extreme heat, navigational challenges and ‘trial’-type sections through rocky river beds—that’s what stage 10 of the 2017 Dakar Rally, which took the participants one step closer to the finish in Buenos Aires, could be described as. With no clear tracks for almost 140 km through the river beds, complicated by multiple entries and exits, it turned out to be the hardest stage of the rally so far.

The presence of tall and thorny vegetation along the course only complicated the task at hand as it impeded the vision of the riders and many frontrunners lost plenty of time trying to find the correct track and the way points.

For Sherco-TVS riders, it was a strong day with both Juan Pedrero and Adrien Metge showcasing brilliant pace. Frenchman Metge was particularly impressive, notching up the fastest time of the stage until CP1 – the toughest part of the stage and ended the stage seventh fastest. His fine effort saw him progress to 26th overall, just 10 places behind his teammate Pedrero. The Frenchman’s performance has been just stunning – considering the fact that he was classified 124th overall after hitting mechanical issues on stage two.

In the Hero Motorsport camp, Portuguese Joaquim Rodrigues who was classified 10th overall at the start of the stage had a tough time in the first part of the stage, spending more time than he would have liked to find the correct route in some of the most challenging parts of the course. He made up some time in the second part of the course though, but couldn’t avoid slipping down to 14th overall in final classifications at the end of the day.

His teammate CS Santosh continued to push on through his recovery drive, despite losing time in the navigationally-challenging first section like most other riders. However, he found a good rhythm to keep the rest of the race pretty smooth and worked his way up to 51st overall at the end of the day.

The penultimate stage of the Dakar will see competitors making their way from San Juan to Rio Cuarto, with the special making up 288km of the total 759km route. With first 50km made up of sand dunes, there is still a long way to go before they can think about making it to the finish at Buenos Aires on Saturday.