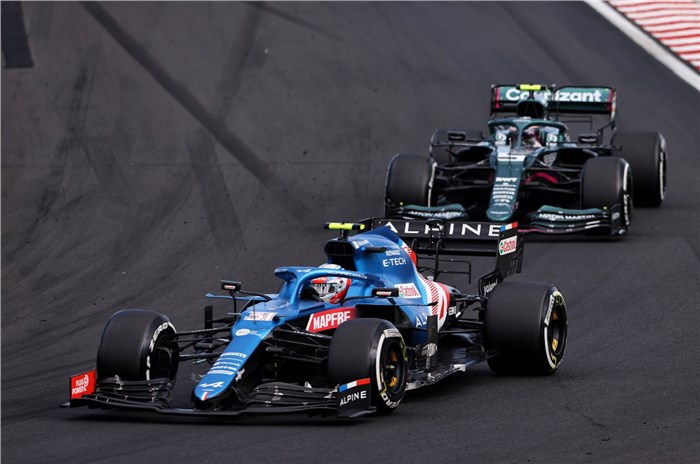 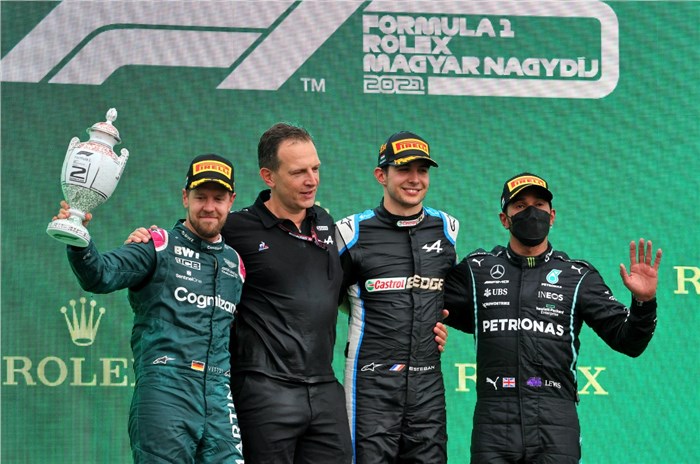 Esteban Ocon fended off Sebastian Vettel to win the Hungarian GP, clinching his own and team Alpine’s first-ever F1 victory. Lewis Hamilton recovered from an early pit-stop misjudgment to finish 3rd. He does, however, re-take the championship lead as Max Verstappen could only finish 10th in his damaged Red Bull.

Read on to find out how the bizarre 2021 Hungarian GP played out:

With the rain pouring down, the race start was going to be all the more challenging. The opening lap saw five drivers taken out after Valtteri Bottas got his braking wrong into Turn 1 and hit Land Norris, who in turn collected both Verstappen and Sergio Perez. Behind them, Lance Stroll locked up and hit Charles Leclerc.

Bottas, Norris, Perez, Leclerc and Stroll were eliminated on the spot, while Verstappen’s car picked up some damage. With too much debris out on track, the race ended up being red-flagged. Bottas has been handed a five-place grid penalty for the Belgian GP for the incident.

Despite holding on to the lead, Hamilton misjudged the track conditions and stayed out, while the entire field pitted for slick tyres during the formation lap. In fact, Hamilton was the only car out on track during the re-start, and by the time he did pit for fresh tyres, he rejoined he had dropped down to last place.

All this chaos allowed Ocon to take the lead ahead of Vettel. In fact, Vettel was running down in 15th place after a poor start, which incidentally helped him avoid all the opening-lap carnage.

Mercedes quickly opted to switch Hamilton to a two-stop strategy. This ended up being the perfect strategy call and gave Hamilton the tyres to pull off his recovery from 14th to 3rd.

Vettel spent majority of the race running closely behind Ocon, but was never quite able to make a move stick. Aston Martin even attempted an undercut, but a slow pit stop ruined any chances of Vettel inheriting the lead.

Ocon expertly held off Vettel for the rest of the race to secure his first single seater victory since 2015. “What a moment. It feels so good. It’s the first victory since the Renault group came back into Formula 1. We had some difficult moments this season that we overcame together with the team, we’ve come back to a fantastic pace in Silverstone and victory today,” said Ocon.

“What can I say? It’s fantastic, so congrats to Fernando as well because I think the win is also thanks to him with the fight that he did, his teamwork, all that. I think it’s been a fantastic day.”

Vettel, meanwhile, had a fast-approaching Hamilton to worry about in the final few laps. But the German was able to hold on to 2nd place, and he may just have Alonso to thank for that.

Hamilton was on a blistering charge after his second pit stop and perhaps had the pace to even win the race. But Fernando Alonso put on a defensive masterclass to fend off the much quicker Hamilton for lap after lap. By the time Hamilton did find a way past, it was too late; he ended up finishing just 2.7secs behind Ocon.

Carlos Sainz finished 4th for Ferrari, ahead of Alonso. They were followed by the AlphaTauri duo of Pierre Gasly and Yuki Tsunoda.

It was also an incredible day for Williams as the team scored its first points since the 2019 German GP. Nicholas Latifi was 8th, with George Russell 9th. Verstappen could only manage a 10th place finish in his damaged Red Bull

The Hungarian GP resulted in some major changes in the F1 drivers’ and constructors’ championships. Hamilton now moves into the lead, six points clear of Verstappen. Meanwhile, Mercedes is now 10 points ahead of Red Bull Racing.

F1 now heads into its summer break; the next race will be the Belgian GP on August 29.