The Briton was followed by Sebastian Vettel in the morning session, while Michael Schumacher ended up second in the afternoon. 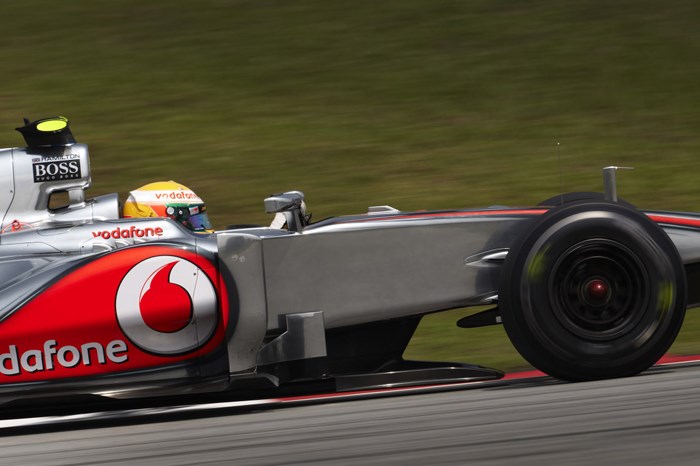 Lewis Hamilton completed a perfect day's work for McLaren by leading the way in both free practice sessions for the 2012 Malaysian Grand Prix on Friday.

The Briton topped the morning session by half a second over world champion Sebastian Vettel's Red Bull, with the two Mercedes next up. Melbourne winner Jenson Button was hampered by an oil leak and was back in ninth for McLaren.

Although forecasts of rain later encouraged teams to complete plenty of mileage early on, it was still half an hour into the session before serious times were set, with Kimi Raikkonen and Michael Schumacher leading briefly for Lotus and Mercedes respectively before Hamilton and Vettel began a battle for first place.

Hamilton narrowly missed out on reclaimed first place with his next lap, before putting in the 1m38.021s that would keep him ahead for the rest of the session.

Romain Grosjean took fifth for Lotus despite pitting for checks early on after reporting a strange feeling at the rear of the car.

Mark Webber completed the top six in the second Red Bull, ahead of Raikkonen, with Paul di Resta and Nico Hulkenberg's Force Indias eighth and 10th.

HRT had little respite from their problems in Australia, as Narain Kartikeyan parked on track with gearbox issues after eight laps, and Pedro de la Rosa was 7.5s off the pace at the back of the pack. The team however, accumalated decent mileage in the second session, with the two drivers completing 40 laps of running between them and finding 2 additional seconds of lap time in the process.

At the top, The 2008 world champion appeared to have put the disappointment of Melbourne behind him as he ended the day more than 0.3s ahead of the chasing pack, his leading pursuers Michael Schumacher and Jenson Button. Hamilton dominated for much of the session as the two McLarens and the two Mercedes vied at the top of the times.

In contrast to his team-mate Button, Hamilton had a trouble-free day. He set the fastest time early on, then lost the top spot to Daniel Ricciardo's Toro Rosso, before moving back to the top of the times at half distance.

Button was in there too with the sister McLaren, just two thousandths slower than Schumacher, the Briton having lost more time in P2 to a minor brake issue - he spent a period in the pits during P1 because of an oil leak.

Nico Rosberg was the quietest of this quartet, and almost unnoticed he snuck into fourth ahead of Ricciardo, whose best lap was set on mediums.

There was some cheer for Ferrari as Fernando Alonso went sixth quickest, 0.7s second away from Hamilton's pace, and much less from the cluster of cars immediately in front of him.

Mark Webber was only seventh fastest for Red Bull, though his long run was much closer to the sharp edge of the race pace.

Jean-Eric Vergne was eighth fastest ahead of Romain Grosjean and world champion Sebastian Vettel – who didn't appear to be enjoying his day in the Red Bull, radioing into his team at one point that he was struggling with the tyres.

Several drivers complained about a lack of grip and Paul di Resta knew all about that after two separate trips into the grass. The first was caused by a front right brake issue at Turn 15 which necessitated a long pitstop, the second was a driving error at Turn Six as the Force India grabbed a bite of inside kerb.

Kamui Kobayashi spent at least half an hour in the pits with a gearbox issue, but still ended up placing 14th, one position ahead of Lotus ace Kimi Raikkonen. The Finn's former Ferrari team-mate Felipe Massa was the next man along in 16th.