The first and only pre-season test of the i1 supercar series concludes. 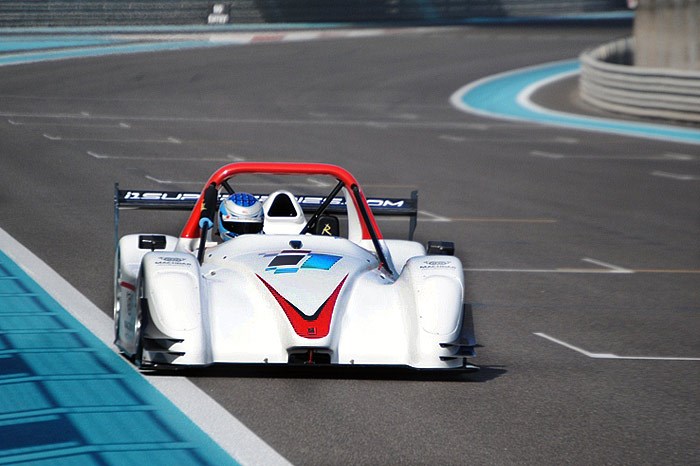 Frentzen topped the charts at the pre-season i1 supercar series.

Former F1 driver Heinz-Harald Frentzen topped the timesheets at the first official pre-season test of the i1 supercar series – the franchise-based Indian series being run with Radical SR3 cars. The German’s lap time of 1:00.505 around the south loop of the Yas Marina circuit was just enough to pip second placed former Force India driver Giancarlo Fisichella, who posted a 1:00.660 while Karun Chandhok took third spot in the standings, with Jean Alesi and Matthias Lauda rounding off the top five.

Among other Indians, F2 racer Armaan Ebrahim ended up seventh overall with a time of 1:00.840, followed closely by Parthiva Sureshwaran posting a 1:00.853. Tin-top racer Aditya Patel was up next, posting a 1:01.258 which was good enough for 13th overall, followed by Raj Bharath, Ashwin Sundar, Akhil Khushlani, Vishnu Prasad and Sailesh Bolisetti occupying spots 15-19.

The base setup of the cars was left untouched to ensure a level playing field, however, drivers commented that tyre wear and reducing fuel weight had some impact on overall pace. The Dunlop tyres on the Radical are usually engineered to last a full race weekend, which meant they were at their best towards the end of the 20-minute sessions allocated to each driver, allowing them 15 to 20 laps of running. However, the track evolved slightly as the day progressed, given that it hadn’t seen hard running after the Formula 1’s annual Young Driver Test held from 15-17th November.

There were a few other concerns too – as few drivers managed to find ways to shorten the circuit by using the tarmac run-off to short-cut a corner or two but the issue was soon resolved after it was brought to the notice of the officials and the times done on those particular tours were excluded.

Including the F1 contingent, most drivers unanimously agreed the Radical SR3 turned out better than they expected, as the majority had never driven it before. Indian driver Karun Chandhok said, “When I first went out, I thought it’d be lazy to turn-in since it’s a two seater and quite a bit wider than a normal single seater. But I was surprised by how quickly it changes direction through the chicanes and it is extremely neutral through the fast stuff as well.” HRT driver Vitantonio Liuzzi agreed, quipping – “I think this car has more grip than my HRT did!” The Radical’s wide footprint does seem like a slight overkill for the amount of power it packs (around 220bhp) but with the aero on the car being limited – the wide contact patch becomes the sole source of grip.

As seen from the lap times, the top 10 drivers were covered by half a season, the racing will be extremely close as expected and hopefully exciting to watch from the stands and on television. However, the big question mark over the identities of franchises still remains – with only four out of nine proposed having confirmed owners. However, Anjana Reddy – whose Deccan Chronicle group is backing the series, said that even though it would have been ideal to have things in place by now, it is just a matter of time before everything is made public. “The worldwide financial crunch hasn’t made matters any easier for us – but we are still fully committed and don’t want to rush into underselling as a last resort. We also don’t want investors who first commit and then decide to leave after the opening year as continuity is important to us”, she said justifying the delay that has left the media and even some drivers puzzled in equal measures.

All lap times (from quickest to slowest)