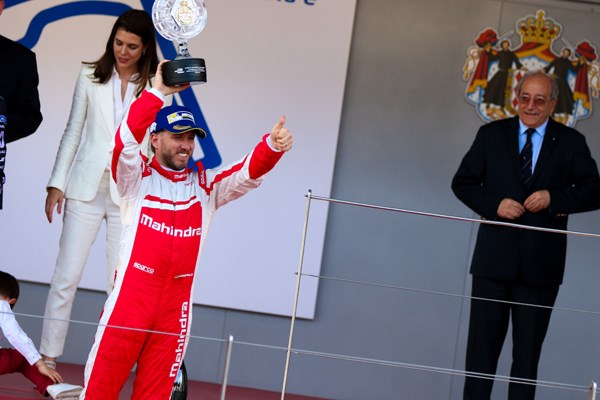 Nick Heidfeld, the German driver for India's Mahindra Racing team, today steered his M3Electro to a superb third place, followed by his teammate Felix Rosenqvist in sixth after 51 laps in the Monagasque principality. The double-points finish is the best ever recorded by the team in the fully electric Formula E championship’s three-year history.

Heidfeld started from eighth on the grid directly behind teammate Rosenqvist and, in what is becoming a signature move, overtook three cars under braking into the first corner.

A tussle between competitors Nelson Piquet Jr. and Jean-Éric Vergne later on lap 22 ended in tears when Vergne stopped on the harbourside barrier in the swimming pool complex section of the track. The altercation promoted a well-placed Heidfeld to the third and forced a safety car during the optimum car swap period.

Rosenqvist was able to move back into sixth position and held onto the strong points-scoring place despite a onesided radio issue. The team reacted quickly to signal the Swede from pit wall to confirm his energy strategy mid-race.

Heidfeld’s podium, just three days after the German celebrated his 40th birthday, is his fourth in as many series on Monaco street circuits after Formula One in 2005, International Formula 3000 in 1998 and Formula Three in 1997.

Mahindra Racing heads straight to Paris for the next round of the FIA Formula E Championship where the team has just a few days to prepare for another tough challenge on the French cobbled streets around Les Invalides.

Dilbagh Gill, team principal, Mahindra Racing Formula E Team, said, “It’s great to finally be back where we belong in third place in the Teams’ Standings after our best ever result in Formula E. A double-points finish is exactly how we wanted to start our comeback of consistently strong results, and we can’t wait to use the momentum in Paris next week.”