F1: Vettel fastest for Ferrari on day one of testing 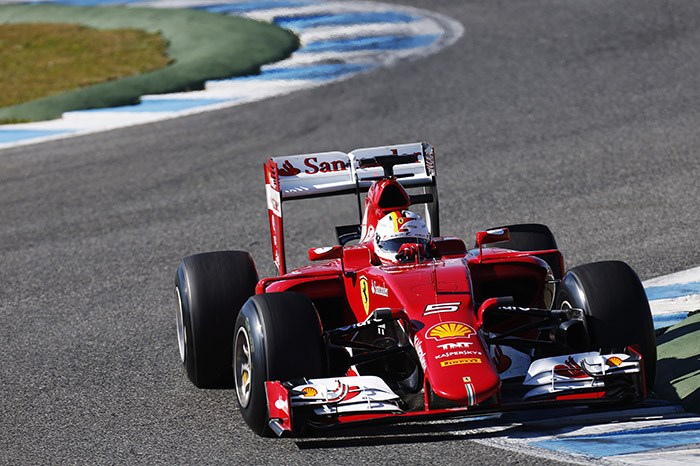 The four-time F1 world champion first moved to the top of the times in the afternoon with a short run, returning to the track after a long delay caused by telemetry problem on the SF15-T.

Sauber's Marcus Ericsson closed to within less than a tenth of a second of that benchmark on a soft-tyre run later in the afternoon, but Vettel went quicker still on a set of mediums in the final 20 minutes of the day.

Nico Rosberg had led the way for double 2014 world champion Mercedes for much of the day before Vettel's quick laps were set, and the F1 W06 comfortably completed the most laps on the first day.

By the end of the day Rosberg had notched up 157 laps - including several long runs - while the next highest total came from Ericsson and Williams's Valtteri Bottas with 73 laps each.

Daniel Ricciardo's Red Bull spent the morning as Rosberg's closest challenger, but his morning running was brought to a smoky halt.

The Red Bull did return to action later in the day, but by the chequered flag the RB11 had only completed 35 laps - with his running curtailed by a battery problem that overheated the rear brakes.

That was not the lowest total on the day though, as the McLaren-Honda completed just six laps in the hands of Fernando Alonso.

Those were broken up into three installation laps, followed by a three-lap run that included the only timed lap set by the MP4-30 all day.

While Williams recovered from a late start to log 73 laps with Bottas, the Lotus E23 failed to appear on track at all as it spent the day in transit from the team's Enstone factory.

The day was only affected by two red flags - the first when Ericsson spun in the morning, and the second late in the afternoon when Carlos Sainz Jr stopped on the backstraight in the Toro Rosso.