From third on the grid, Vettel jumped Hamilton’s Silver Arrow going into Turn 1 at the start, then chased polesitter and early leader Bottas. 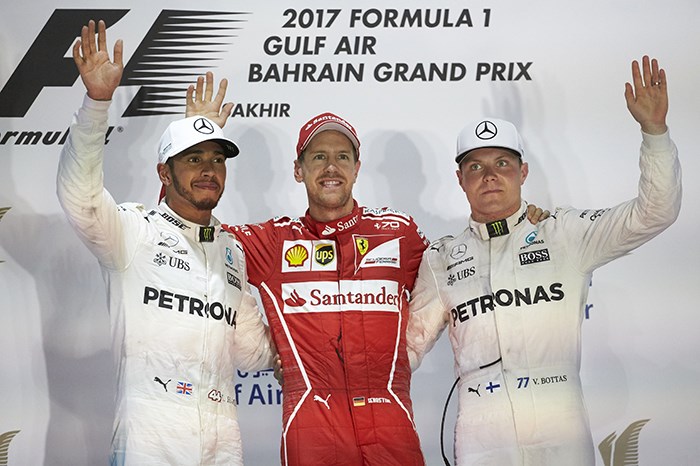 Sebastian Vettel has a clear lead in the drivers’ championship after winning a tense 2017 Bahrain Grand Prix from Lewis Hamilton. A late charge from Hamilton wasn’t quite enough to prevent a splendid Ferrari victory, as his Mercedes team mate Valtteri Bottas took third.

From third on the grid, Vettel jumped Hamilton’s Silver Arrow going into Turn 1 at the start, then chased polesitter and early leader Bottas as the three of them were joined by the Red Bulls of fast-starting Max Verstappen and Daniel Ricciardo in a high-speed train.

Vettel and Ferrari gambled on going for the undercut with an early pit stop on lap 10, and it worked well for them. They were followed by Verstappen and Red Bull doing likewise next time around. But as Vettel recovered in 12th place, Verstappen crashed in Turn 4 on the 12th lap, due to suspected brake failure.

A lap later Carlos Sainz, leaving the pits after a stop in his Toro Rosso, collided with the side of rookie Lance Stroll’s Williams as the Canadian turned into Turn 1 - a misdemeanour which subsequently earned Sainz a three-place grid drop for the next round in Russia.

The safety car was deployed, leaving Mercedes no alternative but to pit both their drivers at the same time. That meant stacking Hamilton behind Bottas, and while trying to give the Finn’s crew time to service him, Hamilton came in so slowly that he was deemed by the stewards to have hindered the following Ricciardo, and was handed a five-second penalty that would prove expensive.

The unhappy Bottas hung on to complete the podium, two seconds ahead of Raikkonen’s Ferrari, with Ricciardo slumping after the safety car to finish fifth, well behind the second Finn but equally a long way ahead of Massa’s Williams.

After his 44th career victory, Vettel leads the championship table with 68 points to Hamilton’s 61, with Bottas now third on 38 from Raikkonen on 32, Verstappen on 25 and Ricciardo on 22.