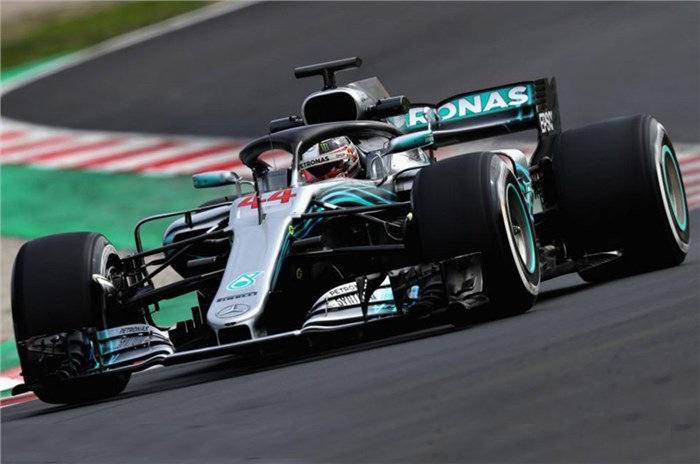 Mercedes driver Lewis Hamilton won an incident-packed race, with only 14 of the 20 drivers making it past the chequered flag. The victory puts Hamilton 17 points clear of Ferrari’s Sebastian Vettel in the Drivers Championship, after the latter was forced to make a second pit-stop under a Virtual Safety Car period due to degrading tyre life.

Valterri Bottas found himself on the second step of the podium, making it a Mercedes 1-2, with Max Verstappen bouncing back strongly from his Baku DNF in 3rd place.

Hamilton made a clean getaway from pole, getting the holeshot into Turn 1. Vettel started strong, too. The Ferrari driver managed to get past Bottas and slot into 2nd place, although his race didn’t end as impressively. Behind them, carnage ensued at Turn 3, with Grosjean, Gasly and Hulkenberg all being involved in a collision that brought out the safety car. The incident was triggered by Grosjean when he lost control and spun across the track, leaving Hulkenberg and Gasly with nowhere to go.

When the safety car peeled into the pit-lane on lap 7, Hamilton made a decisive break at the front, stretching his lead to more than 7sec over the next 10 laps. Meanwhile, Vettel made an early pit-stop on lap 17 in an attempt to prevent Bottas from jumping him in the pits. The Finn would have got past Vettel anyway, had a rear wheel issue during his pit-stop not prevented him from doing so. As a result of this, Vettel managed to maintain a narrow lead after the stops.

Soon after this, Vettel’s teammate Kimi Raikkonen ran into technical issues on lap 25, forcing him to retire from the race. Esteban Ocon faced technical issues of his own 15 laps later, forcing him to park his smoking Force India by the side of the track. This triggered a Virtual Safety Car, and Ferrari immediately brought Sebastian Vettel in for a pit-stop. The German driver later stated that he would have been unable to complete the race on his second set of tyres, as a result of his exceptionally early first pit-stop. That dropped him back to 4th place, behind Max Verstappen. On fresher tyres, he attempted to catch the Dutchman (who had a damaged wing of his own) but the chequered flag came out too soon for Vettel.

Daniel Ricciardo brought his Red Bull home in a lonely 5th place, behind Vettel. The Australian had been maintaining a consistent 10sec gap to teammate Verstappen throughout the VSC period, but dropped back by 21sec after spinning at the restart.

Kevin Magnussen delivered a praiseworthy performance, putting his Haas into 6th place past the chequered flag, while Fernando Alonso failed to capitalise on his best qualifying of the season, coming home in 8th place. Between them, Carlos Sainz was 7th and the lone Renault finisher. Rookie sensation Charles LeClerc earned his second points finish of the season in 10th place, behind Sergio Perez’s Force India.

Grosjean has been handed a three-place grid penalty at the next race in Monaco for his actions on the first lap. Ferrari – and Sebastian Vettel, in particular – will be looking to fight back strongly at Monaco, having lost a big chunk of points to Hamilton in the last couple of races. While the Prancing Horse seemed to have a measure of the Silver Arrows in the first few races of the season, Mercedes seems to have caught up and even surpassed the Italian constructor in the last few weeks.