Eight things you should know before you watch the Indian Grand Prix.

We bring you some "behind-the-scene" facts of the Indian GP 2012. 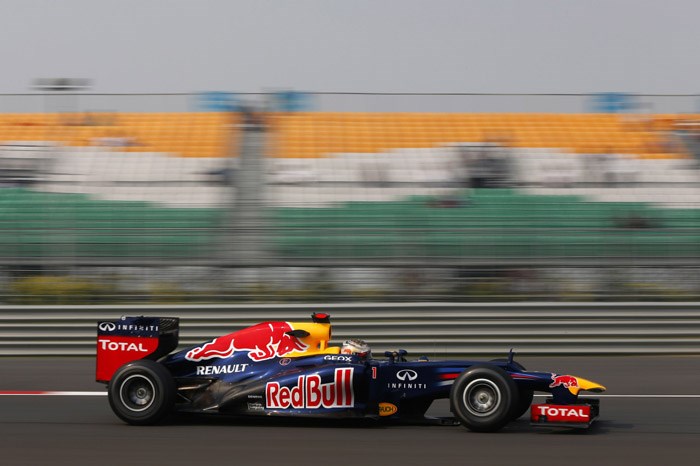 It's only a few hours to the start of the Indian Grand Prix and from the look of things and Sebastian Vettel looks set to dominate the proceedings. But before you settle down to watch the race, there are a few behind the scene facts that might be interesting.

1. Vettel may have secured pole position, but in terms of straight-line speed it's the Toro Rosso driver Vergne who is the quickest. His top speed down the back straight was an incredible 323.2 kph. On the other hand, Vettel's car is setup for higher corner speeds with more downforce, so he only did a max of 311.7kph.

2. Looking at the circuit layout, turns 8 and 9 – the ones leading to the long right hander turn 10 may appear like a tight chicane, but in a Formula 1 car – they are taken at over 200kph, in fifth gear. Simply unreal.

3 Official supplier Pirelli says negative tyre degradation can be expected during the race, which basically means wear isn't really too bad. This means some drivers could run a one stop race, which should mix things up a bit. Jenson Button's smooth driving style could be perfect for this as he will be able to do a long stint, especially on the harder tyres.

4. Kimi Raikkonen of Lotus was looking quick during the practice sessions but the team elected to change the setup of the car. But in an effort to improve it further, the step backfired. But we hope that there is some race pace in that Lotus.

5. Narain was faster than his teammate all weekend but got stuck in traffic on his first run and made a small mistake on his second run during qualifying. He lost out to his team mate De La Rosa by an incredibly small margin. Narain's time is 1:30.593, while his teammate posted a 1:30.592!! That's around one inch on the race track.

6. Lewis Hamilton, third on the grid, is actually much closer to pole sitter Vettel as far as race pace is concerned. He says he can actually gain a bit of time as he lost a bit of time sliding around turn 5 and 6, which if nothing else, will be spectacular to watch once the tyres start to lose grip.

7. The Ferraris have a trick up their sleeve too. They are around eight kilometers an hour faster along the long back straight compared to the Red Bulls. So if Fernando somehow manages to make up two places at the start, we could see some action down the back straight, once DRS comes into play.

8. There is a premium on engine power at the Buddh track as approximately 65 percent of the lap is spent at full throttle. But in the fast, flower sector two and three you need a smooth response from the engine as well. "After turn five you need the engine to be very smooth so can get the right lines" says Vettel.