CS Santosh finished Stage 5 in 37th place to move up to 39th in the overall standings. 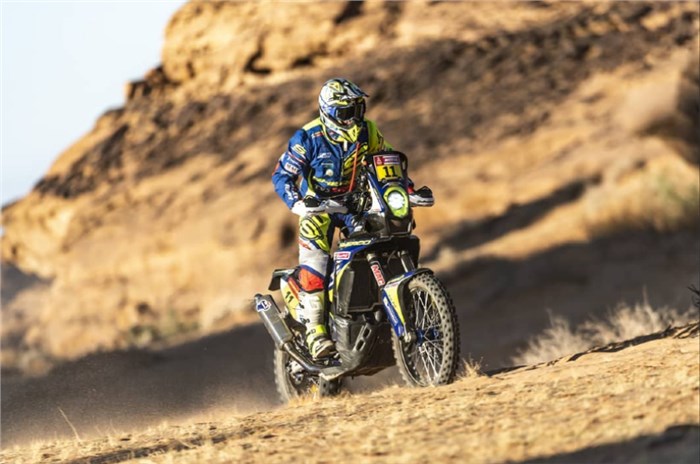 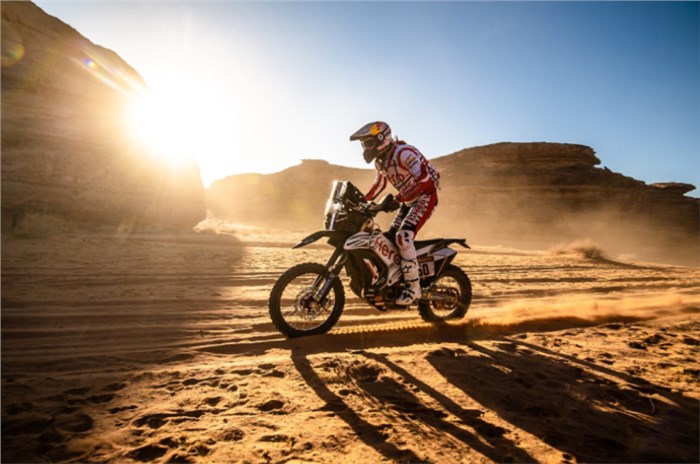 So far the 2020 Dakar Rally has required participants to tackle more rocky tracks, but Stage 5 marked a shift in terrain as the rally now entered more open desert stretches. Overall, the stage saw all the riders from the Indian contingent more or less hold their ground as the rally nears its halfway mark.

It’s been a strong rally for Sherco TVS’ Adrien Metge so far. He’d climbed up to 11th in the general standings after yesterday’s stage, and while he yet holds onto that position, a 16th-place finish in Stage 5 has helped him close the gap ahead to Stefan Svitko to just over 1min. With seven stages yet to go, the French rider stands a good chance of finishing in the top 10 if he continues this form and avoids any unnecessary errors.

Hero MotoSports’ Paulo Goncalves pushed his Hero 450RR to the limit in the opening section of the stage before taking on a more cautious approach as the final 200km was run entirely off-piste. He finished stage in 10th place to further gain some positions in the overall ranking following his Stage 3 engine issue. The Portuguese rider is now up to 59th place overall.

CS Santosh enjoyed a strong stage, finding his rhythm to secure a 37th-place result and climb to 39th in the general classification. “I really enjoyed the riding the stage today and I am starting to feel better and more confident on the bike. Can’t wait to see what the next few days are going to bring to us,” the Indian rider said.

Sebastian Bühler is currently running as Hero MotoSports’ top rider in what is his debut outing for the Indian team. His consistent performance has seen him slowly make his way up the overall order. A 21st-place result in Stage 5 means he continues this upward trajectory and he now moves up to 19th place overall. It was a tough stage for Joaquim Rodrigues, who is now running in the Dakar Experience class following his Stage 1 retirement. But despite suffering a crash, he managed to finish the stage in 25th.

Coming back to Sherco TVS, Lorenzo Santolino completed Stage 5 in 15th place, while Johnny Aubert finished 26th. This sees both riders lose a place each in the general classification with Santolino now in 15th place and Aubert in 17th. Elsewhere, Harith Noah may not yet be in contention for an overall result, but the Indian rider has been improving on his stage results and he completed Stage 5 in 38th place

KTM’s Toby Price secured his second stage victory in 2020, but Honda’s Ricky Brabec controlled run means the latter’s only conceded 3min to Price. As a result, Brabec continues to lead in the bike category by a margin of 9min. In the car category, Carlos Sainz beat Nasser Al Attiyah to stretch his lead to just under 6min. Meanwhile, Fernando Alonso crossed crossed the line in 7th place, but his Stage 2 accident means he yet trails the front runners by over 3hr.