Chetan Shivram secured his second INRC win of the year as the punishing stages in Bengaluru caught out several heavyweights. 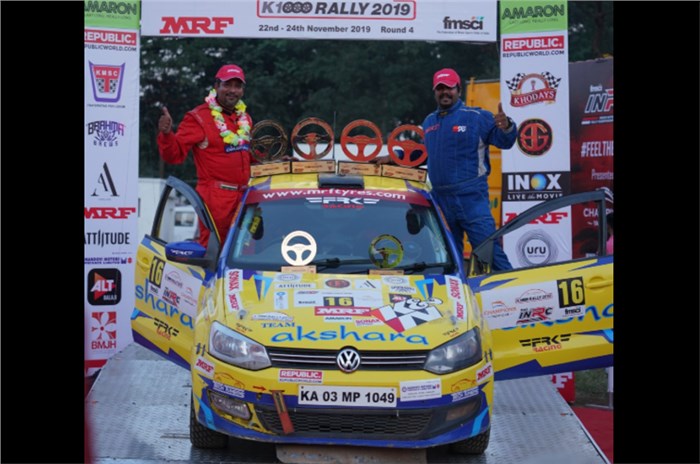 The Indian National Rally Championship (INRC) has faced a few setbacks in the past few months, the most recent one being the cancellation of the Popular Rally in Kerala. However, the championship finally resumed its 2019 season with the K-1000 Rally held in Bengaluru. The event ended up being attrition-ridden, with several heavyweights suffering retirements – something that Chetan Shivram took advantage of to secure his second win of the season.

The rally marked Gaurav Gill’s much-awaited return to competitive rallying following the tragic incident that occurred in the third round in Jodhpur in September. And the defending INRC champion grabbed the headlines on the first day of the event, exhibiting caution and control in the punishing stages to secure the overall lead by a margin of nearly 50sec after the first day. Unfortunately for Gill, he was hit with bad luck the next day; he couldn't start his Super XUV300 following the punishment it bore in the previous day and he was forced to pull out of the event.

Gill wasn’t the only frontrunner to face issues, as Dean Mascarenhas and championship leader Fabid Ahmer also retired from the rally. All this allowed Team Akshara’s Chetan Shivram, who was competing in the INRC 3 category, to win the rally and move into the overall lead. Earlier this year, Shivram had also won the Rally of Coimbatore (Round 2 of the INRC) in a similar fashion.

Team Champions’ Bikku Babu finished 12 seconds behind Shivram to take 2nd place. He managed to defeat Shivram in stages 5 and 8, but that wasn’t enough for him to secure victory. However, his time was good enough to fetch him the win in the INRC 2 category. In what was some consolation for the team following Gill’s retirement, Mahindra Adventure secured a podium finish with Amittrajit Ghosh taking 3rd place.

K-1000 Rally also marked the finale of the SUV challenge, with Team Champions’ Gagan Karumbaiah securing the first place to seal the 2019 title.