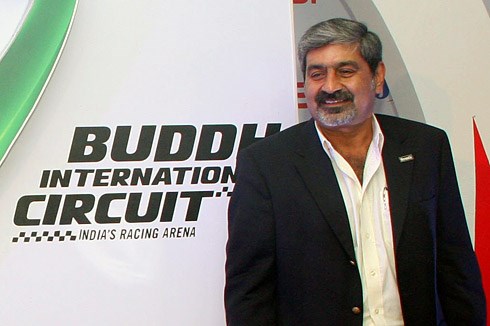 Indian motor sport federation president Vicky Chandhok has voiced concerns about the event's proposed April 22 slot on the 2012 Formula 1 calendar which Bernie Ecclestone submitted to the teams ahead of the Hungarian Grand Prix.

Following team principals remarks that they are set to ask Ecclestone for a rethink due to the logistical demands of fly-away back-to-back races at the end of the season, Chandhok believes the Indian GP could also benefit from a change of date due to the country's hot weather at that time of the year.

"I am not happy with April because it's going to be hot," said Chandhok. "But if we have to go in April we will go. But I really think that the ideal dates for India are when it's cooler. Maybe March or you go to October, November, December."

Chandhok added that he believes New Delhi's debut on the world stage will impress F1 when it hosts India's inaugural grand prix on October 30 this year.

"I have been to every single racetrack in the world," he said. "It's going to be one of the fastest circuits in the world. A 1.2km straight and three corners that have now been redefined - they are following the new FIA guidelines to encourage overtaking.

"I think it's going to be phenomenal. There will be lot of scope of overtaking."

Chandhok also insisted that preparations for this year's event remain on track in spite of FIA technical delegate Charlie Whiting delaying his final inspection until the beginning of September.

"He is visiting Korea at the end of this month, on his way back he is flying over Delhi," said Chandhok. "So he will stop over at Delhi as it will make logical sense for the FIA. It's purely procedural and a matter of convenience for the date of inspection.”