The Gixxer Cup is a five-round series with two categories; final round will be held at BIC on September 26. 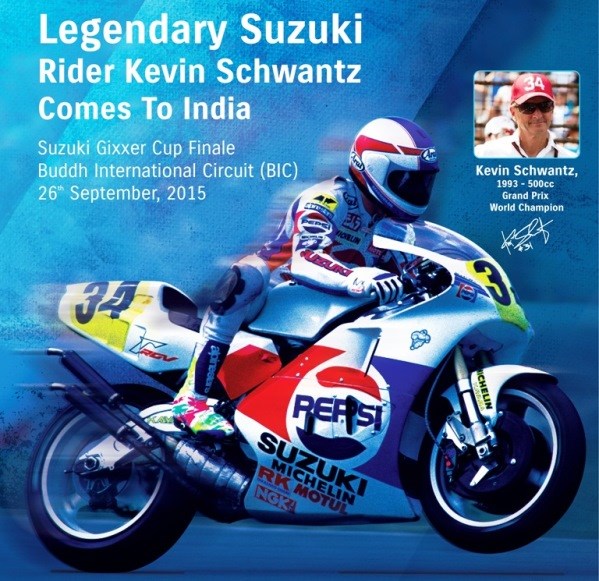 MotoGP legend Kevin Schwantz will be heading to India to attend the Suzuki Gixxer Cup finale, which will be held at the Buddh International Circuit on September 26, 2015.

The Gixxer Cup is a one-make racing series by Suzuki Motorcycle India to promote motorsports in the country. The competition is organised in partnership with the Madras Motor Sports Club (MMSC). The five-round series has two categories – Novice and  Open. For the Open category, Suzuki has prepared 20 race-spec versions of the Gixxer. The bikes have been made lighter by 20kg by removing headlights, rear-view mirrors, pinion, pinion seats and through the use of lighter alloy components. A new exhaust system is also part of the listed modifications. The stock engine remains untouched.

Atul Gupta, Executive Vice President of Suzuki Motorcycle India said, "We are extremely excited to announce our next and final round for the 2015 season at the Buddh International Circuit in Greater Noida. Not only does this bring the races and excitement to northern India, we will also have the presence of the legendary racing icon Kevin Schwantz, the 500cc Grand Prix World Champion of 1993 and a die-hard Team Suzuki rider for decades!"

Kevin Schwantz began his career in 1984 with Team Suzuki, and has remained a staunch Suzuki rider for the duration of his career that includes numerous victories: the Daytona 200 in 1988, the 1993 500cc Grand Prix World Championship, and 24 more Grand Prix races, making him the 2nd most successful American road racer. Inducted into the AMA Motorcycle Hall of Fame in 1999, Schwantz is still actively involved with numerous motorcycle racing events, and has promised to attend the Gixxer Cup finale at BIC to show his everlasting support to Team Suzuki and its motorsport endeavours.