Besides bagging top honours in the media race, he participated in the open category as a wild card entry. 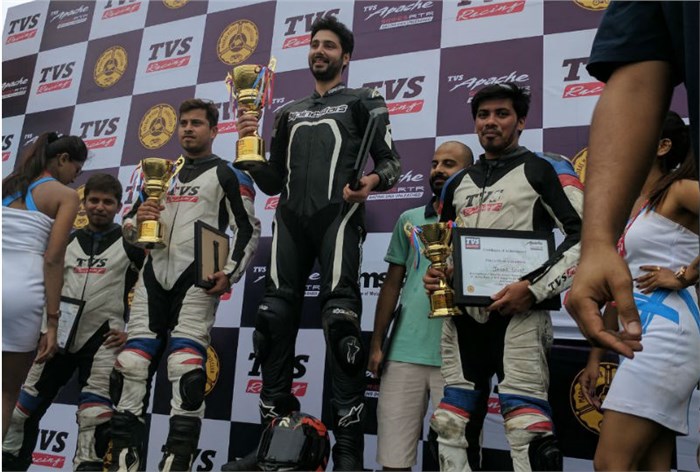 Rishaad started his weekend on a strong note, topping the practice session before clinching pole position in qualifying. Representing Autocar India on the grid, he went on to secure a perfect lights-to-flag win on Saturday – finishing ahead of Amar Katkar of Zigwheels and Janak Sorap of Motoring World.

Not just satisfied with taking top honours in the media race, Rishaad also participated in the open category as a wild card entry, with the grid consisting of experienced riders.

Earlier, during Thursday’s practice session, Rishaad was around six seconds a lap in arrears compared to the frontrunners but was determined to do better. In Friday’s qualifying, he turned up the wick and pushed hard, lapping with a time of 2:12.9, which was good enough for fifth place on the grid.
As lights went out for race one, Rishaad endured a poor start and dropped back to eighth. However, he was feisty through the first few corners and clawed his way back up to fifth; he was duelling with the lead group a few corners later.

Misfortune struck though as the rider following Rishaad went for a wild lunge and lost the bike, making contact with him and sending him off the track. Rishaad managed to pick the bike back up and get going, but could not finish better than ninth.

Race two of the open category was equally dramatic with a slew of incidents on the opening lap. Rishaad managed to avoid most of the early ones but a massive crash in front of him at turn 10 caught him out. He tried avoiding the fallen riders and crashed in the process, with the bike refusing to start. It was quite an end to his roller-coaster weekend.