Battling for the lead, Hamilton closed in on Rosberg around the outside, only to be forced off the track as they again ran into one another. 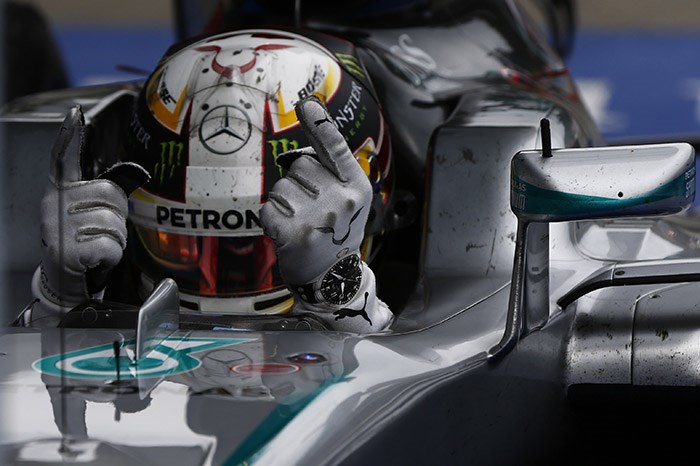 Battling for the lead at the Red Bull Ring, Hamilton closed in on Rosberg around the outside of Turn 2, only to be forced off the track as they again ran into one another.

Rosberg sustained severe damage to his front wing, and was eventually passed by not only Hamilton but also Red Bull's Max Verstappen and Kimi Raikkonen's Ferrari.

Fourth meant Rosberg's championship lead has come down from 24 to 11 points and the stewards are investigating him for causing a collision and failing to stop with a seriously damaged car.

It was a breathless finish to a stunning grand prix that started with Hamilton finally turning pole position into a lead coming out of Turn 1 after failing to do so from his four previous 2016 poles.

From his sixth place on the grid after serving a gearbox-change penalty following his crash in final practice, Rosberg claimed one spot to run fifth at the end of lap one.

Soon after passing Jenson Button's McLaren for fourth, Rosberg pitted to switch from ultra-softs to the soft compound after 10 of the 71 laps.

While Rosberg rejoined 15th, 30s from the lead, Hamilton conjured a remarkable job to eke life out of the ultra-soft tyres that had blistered so quickly in practice - helped by the cooler conditions of race day.

Although Hamilton managed to keep second-placed Kimi Raikkonen at bay, Rosberg managed to eat into the Briton's advantage, slashing it to 21.9s by the time the Briton eventually pitted after 21 laps.

A slow replacement of the left-rear did not help Hamilton's cause, and he emerged a few seconds adrift of Rosberg.

Raikkonen pitted a lap later, but with Ferrari's poor strategy calling this year again exposed as he emerged in sixth behind both Red Bulls.

Sebastian Vettel stayed out and assumed the lead, one that lasted for just five laps before his right-rear tyre exploded down the main straight, with Pirelli citing debris on the track as the cause.

With Vettel stranded on track, the safety car was deployed and Rosberg led from Hamilton, Max Verstappen, Daniel Ricciardo and Raikkonen at the restart, with the Mercedes soon pulling away.

Both would stop again, Hamilton coming in first with 19 laps to go and taking on used softs.

Again it was not the quickest from his crew, plus a poor Turn 2 for Hamilton enabled Rosberg to stay ahead after his stop for new super-softs a lap later.

The Mercedes then had to battle past Verstappen, who was nursing his softs on a 56-lap stint to the finish, before commencing a titanic scrap that ended in their last-lap contact and a crucial win for Hamilton.

Behind Verstappen, Raikkonen and the hobbled Rosberg, Ricciardo claimed fifth after a late stop for ultra-softs.

Button held his own among the frontrunners at first - holding second for seven laps - and finished sixth for McLaren-Honda, ahead of Romain Grosjean and Carlos Sainz Jr.

A last-lap crash for Sergio Perez after an apparent mechanical problem elevated Valtteri Bottas to ninth and his pursuer Pascal Wehrlein into 10th and a point for Manor.

The other Force India of Nico Hulkenberg went backwards from his first front-row start for five and a half years, making three pitstops for tyres and retiring from the midfield late on.