Qualifying postponed to Sunday due to heavy rain showers during the first session of qualifying. 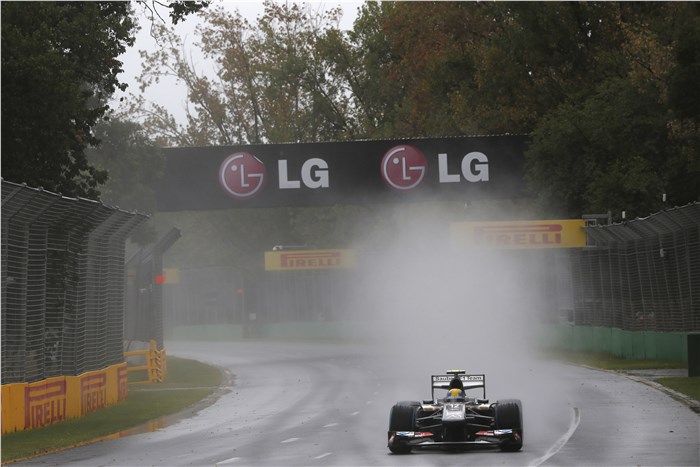 Qualifying for the Australian Grand Prix will be postponed until 11am local time on Sunday morning due to heavy rain showers in Melbourne.

A delayed Q1 managed to take place, but the start of Q2 was repeatedly put back due to the weather conditions.

The decision to postpone the rest of the session was finally taken nearly two hours after qualifying had begun.

The situation was complicated by further showers being forecast, so that even if the track improved, the likelihood was that the rain would immediately return.

Looming sunset added a further pressure, with little daylight left to fit in Q2 and Q3.

Nico Rosberg had been quickest in Q1 for Mercedes, which got its cars out first at the start of the session.

This meant Rosberg spent a long while on top, although he had to fight to get the position back again after everyone switched to intermediates with five minutes to go.

His team-mate Lewis Hamilton spun at Turn 2, sustaining minor rear wing damage as he nudged the barriers. Briefly stranded on the sodden grass, he eventually managed to reverse back onto the track.

That was one of many incidents during the running that did take place.

Felipe Massa and both Caterhams had to limp back to the pits minus front wings after spinning into the barriers.

Esteban Gutierrez had a similar incident but ended up stranded on track in a damaged Sauber. That left him 18th on the grid, just behind a frustrated Pastor Maldonado.

Jules Bianchi led the rest of the rear pack in his Marussia, with the crashing Caterhams at the very back.