Romain Grosjean jumps to the top at the rain hit track in Practice 3. Ferrari's Alonso and Massa rounded off the top three positions. 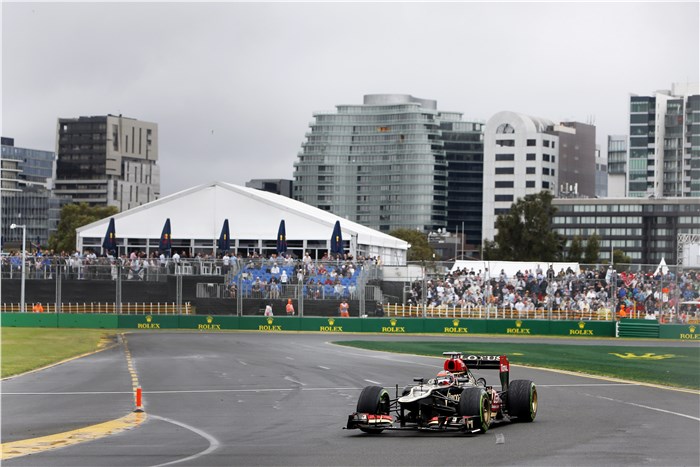 Romain Grosjean put Lotus on top of the times in final practice for the Australian Grand Prix as the rain hit the Albert Park circuit and Sebastian Vettel hit trouble.

Grosjean posted a best time of 1m26.929s right before the heavens opened and that kept the Frenchman ahead of his rivals until the end.

Red Bull driver Vettel finished down in 12th after stopping on track late in the session.

With rain threatening to hit the session early on, the majority of drivers began completing full laps right away, with Mark Webber the first frontrunner to set a time.

The Australian was quickly outpaced by several drivers as the threat of rain increased, Brazilian Massa setting a time of 1m27.407s to move to the top 10 minutes into the session on a very busy track.

Team-mate Alonso and then Lotus's Grosjean lowered the benchmark moments later, the Frenchman posting the first 1m26 just before the rain made its appearance with 43 minutes to go.

The heavy rainstorm put an end to all the action for several minutes.

With 25 minutes to go, Massa was the first man to brave the conditions in the Ferrari, shod with full wets. With the track still very wet but with no rain, all drivers except Vettel and Jenson Button ventured out in the following minutes.

Friday's pacesetter Vettel jumped onto the track with less than 15 minutes to go, the Red Bull driver the first man to use the intermediate tyres.

His run, however, did not last long as he stopped on track with 10 minutes to go with an apparent hydraulic problem. The German managed just nine laps.

Although there was no more rain, no driver put on slicks before the end of the session and therefore there were no improvements over the times set early on.

Despite the tricky conditions and some minor scares, the session was mostly trouble-free.