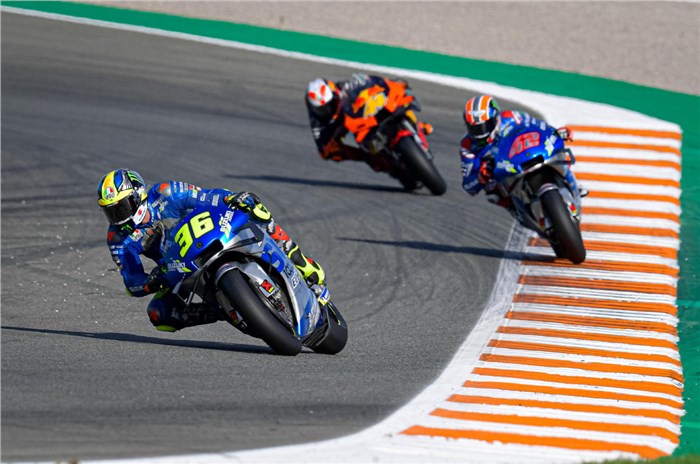 Joan Mir finally managed to win a MotoGP race and it couldn't have come at a better venue than his home GP at the Ricardo Tormo Circuit in Valencia, Spain.

Mir was in the lead of the 2020 MotoGP world championship going into Sunday's round, despite not winning a single race so far. It shows how he's been consistently gathering crucial points throughout the season, while his chief rivals faltered on many occasions

Alex Rins held the lead for a significant portion of the race, but with 12 laps to go, Mir swept past him at Turn 11 to move into the lead. The two held position from there on, handing Suzuki their first 1-2 finish in 38 years.

Pol Espargaro stayed within touching distance of the Suzukis, but ultimately had to settle for a third-place finish. This is the factory KTM rider’s fourth podium this season, and it sees him move nine points clear of Ducati rider Andrea Dovizioso in the championship.

Quartararo and Rossi crash out

Joan Mir also has his lucky stars to thank, as other championship contenders had disastrous races at some point or another. Petronas Yamaha's Fabio Quartararo, for instance, crashed on the opening lap of the European GP and dented his chances of clinching the championship. Maverick Vinales, on the factory Yamaha, had to begin from the pit lane after using more than five engines this season. Yamaha's technical issues also forced Valentino Rossi to retire, a comeback that 'The Doctor ' didn't hope for after missing out a few races due to testing positive for COVID-19.

With two rounds to go this season, the championship is still undecided, but Mir’s maiden victory takes him a step closer to clinching the title. At present, Mir has a solid lead, with 162 points in the bag. Quartararo is second with 125 points, followed by Alex Rins, also at 125 points.

The next round will be held at Valencia on November 15, while the final round will take place at the Algarve Circuit in Portugal.

MotoGP: Morbidelli takes his second win of the season at Teruel GP