Five days of intense racing in the two-wheeler class came to an end with South African rider Aaron Mare winning the 16th edition of Desert Storm in Jaisalmer, Rajasthan. 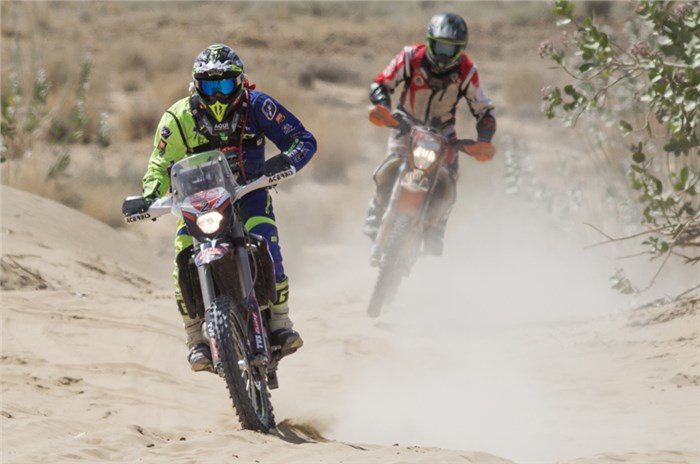 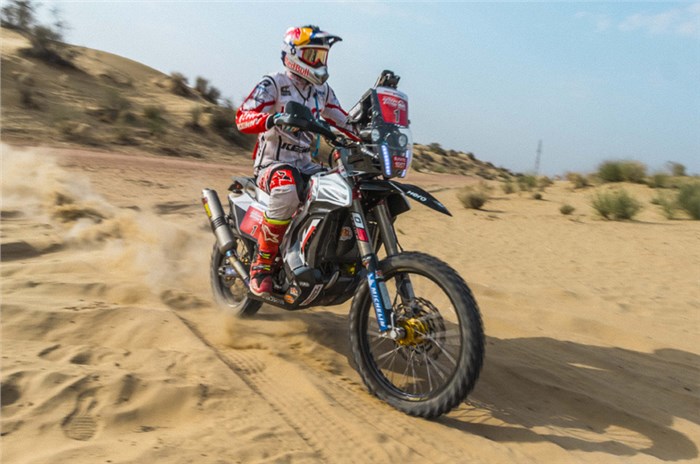 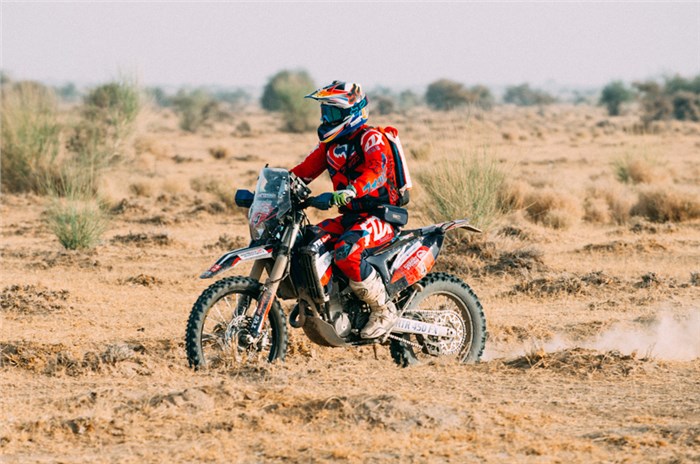 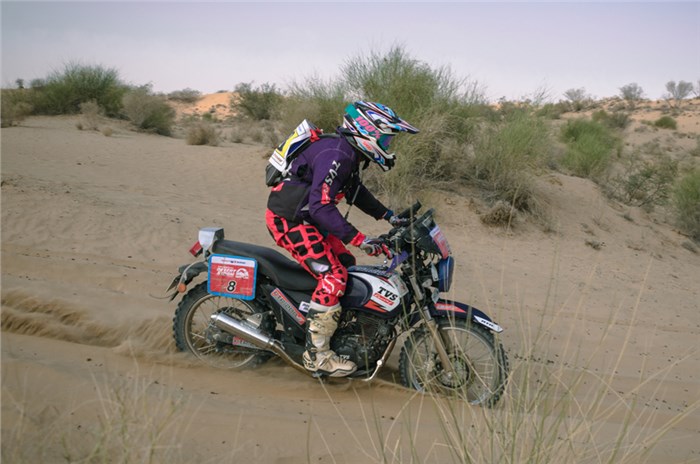 The sun is belting down in all its glory and the heat bouncing-off the sand drains you in minutes. The only respite are the few and far in between cool gusts of air. After waiting for almost 30 minutes in the Thar Desert, I hear a buzz, something was approaching. Gradually, the buzz started gaining momentum and I could see some dust being kicked up in the distance. Then suddenly, I see a rider standing on his motorcycle fighting for traction on the loose sand as he blasts past me! What a high it was, this was my introduction to Desert Storm, which is considered among the toughest rally events in India.

The 2018 Desert Storm consisted of five stages and was kicked-off from Bikaner.

Stage 1
The opening stage itself proved daunting for many riders as it had a special night stage, which caught many riders on the back foot. TVS Racing’s Aishwarya Pissay got knocked out in the first stage itself as she lost her way after the headlight of her bike malfunctioned. Most of the seasoned riders in Group A class (up to 450cc) took the night stage cautiously, especially Santolino Lorenzo of TVS Racing who was making his debut in Desert Storm. It was Indian star rider CS Santosh of Hero MotoSports Team Rally who won Stage 1 of the rally while Aaron Mare of Angata Racing was 6 minutes and 47 seconds behind. Sanjay Kumar of Angata Racing finished third and Tanveer Abdul Wahid of TVS Racing completed the stage in fourth place.

Stage 2
Stage 2 of the rally saw the riders travel from Bikaner to Jaisalmer. The first special leg was held in Bikaner. It consisted of tight sections that made the pace slow as riders tried their best in manoeuvring their way past obstacles. CS Santosh continued to maintain his lead in Stage 2 as well, with an overall timing of 03h 03m 06s, while South African rider Aaron Mare had managed to close down the lead to a shade above two minutes. Since the stage wasn’t about flat-out racing, it allowed Mare to cut Santosh’s lead as he had a top speed disadvantage in comparison to the Hero bike. Mare’s teammate maintained his third position, but the rider that made the most progress was TVS Racing’s Santolino Lorenzo, who was now up in fourth position. Lorenzo tried to make amends for the time he lost in the night section of Stage 1 and clocked the fastest time in Stage 2. Despite all his efforts, the Spanish rider was still almost 24 minutes off the race leader. However, TVS Racing had its share of disappointment as well, with 2016 Moto class winner R Nataraj retiring out of the rally.

Stage 3
Stage 3 was the longest (over 200km) and possibly the toughest stage of the rally and it started from a village called Turko Ki Basti. It was held in among the most arid places imaginable and, at Asu Tar we were shocked to witness dried-up cattle corpses, they had died due to dehydration. It gave us an idea of how difficult the stage would be, and it lived up to its reputation as many riders pulled out of reckoning with mechanical failures and crashes. The biggest setback was that of rally leader, CS Santosh who hit a sand bank and crashed hard, which resulted in a neck injury. Keeping in mind the future competitions, Santosh decided to retire from the rally and avoid further complications. The crash meant, Aaron Mare lead the rally in terms of overall timing, while Lorenzo was the fastest man in Stage 3 which pushed him up in second place ahead of Sanjay Kumar.

Stage 4
Stage 4 of the rally was another exhausting day for riders with more sand dunes, trails and soaring temperatures. The Stage was split in two legs, with the first leg being held in Maji Ki Basti and the flatlands meant that riders were riding on full gas. The second leg was supposed to be held in night, but, given the difficulties faced by rider and keeping safety in mind, the leg was preponed to evening before sunset. Lorenzo utilised the firepower of the Sherco TVS bike to its full potential to register another fastest stage timing as he clocked speeds up to 140kph on sand! Despite his performance, the Spaniard was still trailing Mare by five minutes heading into the final stage of the rally. Sanjay Kumar maintained his position, while privateer Ashish Raorane of Pune ended the stage in fourth position overall as Tanveer from TVS Racing had to retire due to mechanical issues.

Stage 5
The final Stage of the race was just 24km long and Aaron Mare kept his calm to cross the finish line two minutes behind stage winner Lorenzo but, with an overall timing of 08hr 01m 20s, he managed to win the 2018 Desert Strom by over five minutes. The night stage costed Lorenzo dearly as despite winning four of the five stages, he had to be content with second place. Angata Racing had a great outing as Sanjay Kumar finished third while Ashish Raorane had to retire disappointingly a few kilometres from the starting line due to a mechanical problem. In the Group B class (250cc to 500cc), Virendra Waghela triumphed, while Mohan Lal Sharma won the Group C class (above 260cc). The 16th edition of the Desert Storm was among the toughest rally as the route was almost 70 percent new and out of the 38 riders that participated in the two-wheeler category, only 18 riders managed to cross the finish line. The fact that less than 50 percent of the riders completed the rally gives us an indication how difficult the event was. The Desert Storm also acted as a good preparation platform for racers participating in India Baja 2018, and we are looking forward to some more action at the upcoming rally.