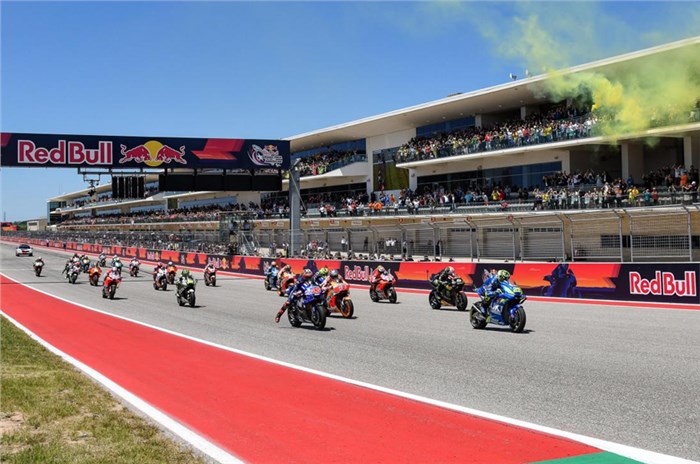 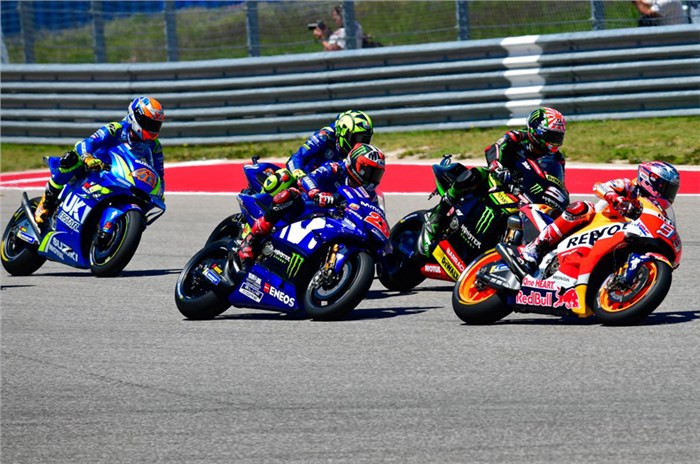 Marc Marquez rode a flawless race to record his sixth consecutive win at COTA (Circuit of The Americas).

Repsol Honda rider Marc Marquez was at his dominant best, as he took a convincing win at COTA (Circuit of The Americas) to maintain his unbeaten record on US soil. Marquez was the fastest rider throughout the weekend and a sixth consecutive premiere class pole position at COTA looked inevitable. However, he blocked Maverick Vinales while he was out on his flying lap and the Honda rider was a given a three place grid penalty that pushed him to fourth place, despite setting the fastest lap. This promoted Vinales to pole and he was joined by Andrea Iannone and Johann Zarco respectively on the front row. The only way Marquez could have got ruffled was if he made a bad start.

But, the reigning champion made a great start as he followed Iannone into the first corner, while Vinales was third. It wasn’t long before Marquez had closed down on Iannone and the Spanish rider grabbed the race lead in the opening lap itself. In a desperate move Iannone tried to out-brake Marquez, but, he ran wide and that was the last occasion any rider could come close to the reigning champion. Lap after lap, Marquez was posting the fastest lap of the races and he was over two seconds ahead of Iannone in just five laps. Another rider, who was making swift progress was Valentino Rossi. The Italian rider made a poor start that pushed him to sixth place.

The MotoGP legend displayed great pace as he overtook Cal Crutchlow and Zarco to take fourth place. Vinales was also able to make his move stick on Iannone to promote himself to second place and Rossi was closing down on his fellow countryman. With 12 laps remaining in the race, Crutchlow, who was leading the championship standing after the opening two rounds crashed out in an attempt to safeguard his sixth position. By the halfway mark, the race win was all but sealed as Marc Marquez was flying and his race lead was over five seconds. Further down the grid Rossi was struggling on his Yamaha M1 and he wasn’t able to pass Iannone, who was now slowly inching away from him.

After an exciting race in Argentina, the Americas GP was turning out to be a boring race before Zarco and Dovizioso started fighting for fifth place in the closing stages of the race. Marc Marquez was at his ruthless best, as he was leading Vinales by over seven seconds and crossed the chequered flag effortlessly. Iannone stood on the last step of the podium and it was a special performance for the Italian rider as it was his first podium finish for Suzuki after joining them last year. Andrea Dovizioso now leads the championship with 46 points, with Marquez being just a point behind and Maverick Vinales is in third place with 41 points.