Survey: 60 percent of Indians use cell phones while driving

Nissan survey reveals three in five Indian drivers use their phones while driving; 60 percent of respondents admitted to overspeeding as well. 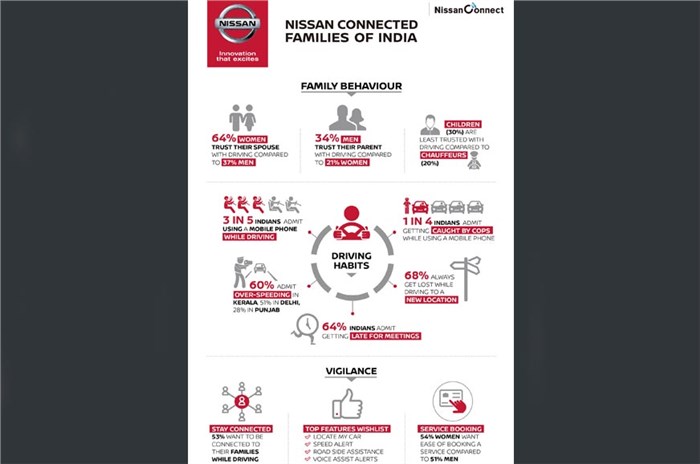 That India’s roads are unsafe is not news. In fact, there are reports of accidents and fatalities caused due to a variety of reasons – from crumbling infrastructure to overspeeding to driver errors – almost every day.

A recent survey conducted by Nissan India and Kantar IMRB (a market reseach firm), has revealed that three in five Indian drivers (60 percent) use their mobile phones while driving. However, only 25 percent of those breaking this law admitted to being caught by the police. 62 percent of North Indian drivers admitted to this offence, compared to 52 percent in South India.

The survey, which was conducted over 20 states to find out the driving habits of Indians, also found that 60 percent of respondents admitted to overspeeding in the state of Kerala, 51 percent in Delhi and 28 percent in Punjab.

Besides these observations, the survey also showed that 68 percent of Indians get lost while driving to a new place while almost 64 percent admit to being late for meetings – 65 percent of respondents in Kerala confessed to this as opposed to 48 percent in Punjab.

Jerome Saigot, Managing Director, Nissan India said, “The findings of the Nissan Connected Families of India survey revealed 53 percent of the respondents expressed a desire to be connected to their family even while driving.”

Nissan and Renault may merge to create a new company

Nissan, Datsun prices to go up by 2 percent