Ford is deadly serious about making its new crossover fun to drive. In a first, we get early access to a test car, even before it’s been signed off. 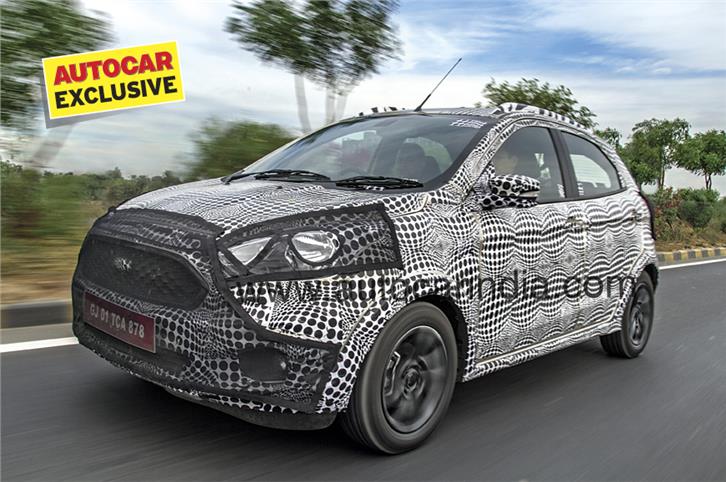 Stability at highway speeds is excellent and it drives and feels like a big car. 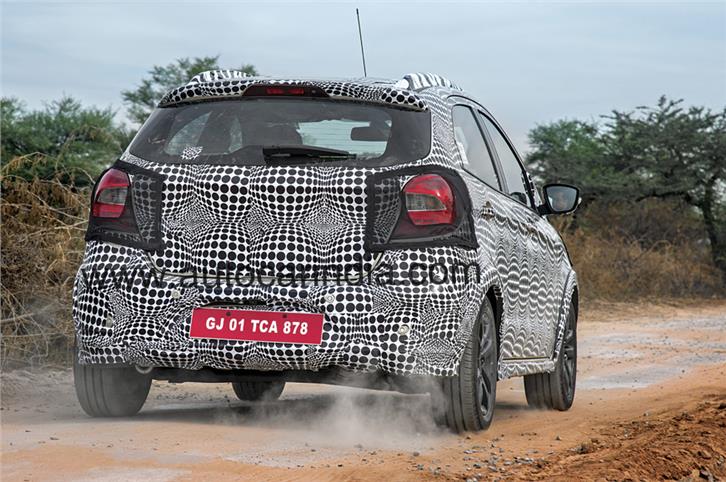 It feels secure on good roads, bad roads and dirt roads too. 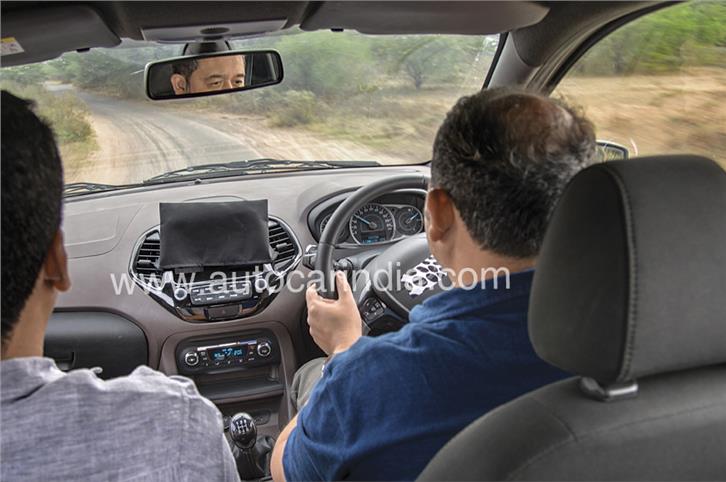 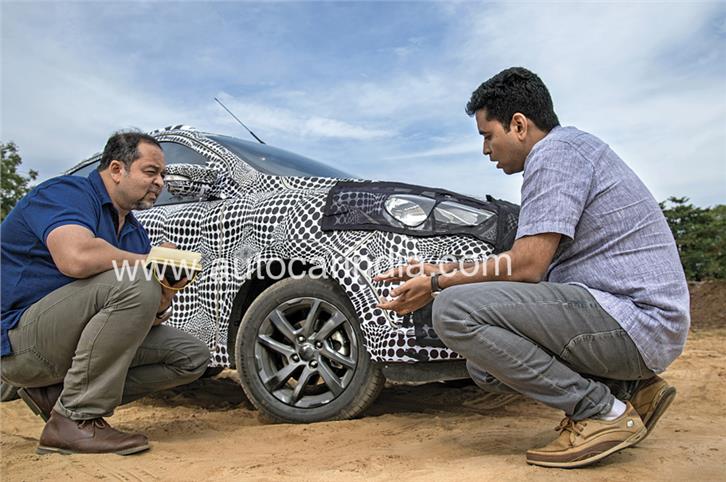 Having a car we’re about to drive pick us up at the airport is something that we experience often.
With car plants, test centres and engineering departments scattered all across the country, it allows us to maximise our time with the car. Walking up to a test car, in snow leopard camo no less, hidden in a remote corner of the airport, however, isn’t something we’ve done before.

I settle in and get comfy behind the wheel. Seat way down and forward enough to allow me to be on ‘top’ of the wheel, mirrors set to see the ‘hips’ of the car, I’m lost in my thoughts. And then it hits me! This is an all-new 1.2-litre Dragon petrol! And like its larger 1,500cc sister, it’s a three-cylinder. Unlike that engine, however, this one has no balancer shaft to quell the first-order vibrations. So, how exactly is the idle so smooth? Yes, I can detect a hint of lumpiness when I set the fan speed to low, and there’s some flutter when I take off as well, but apart from this, it seems like Ford has, yet again, nailed low-speed refinement on its third three-cylinder engine for India. 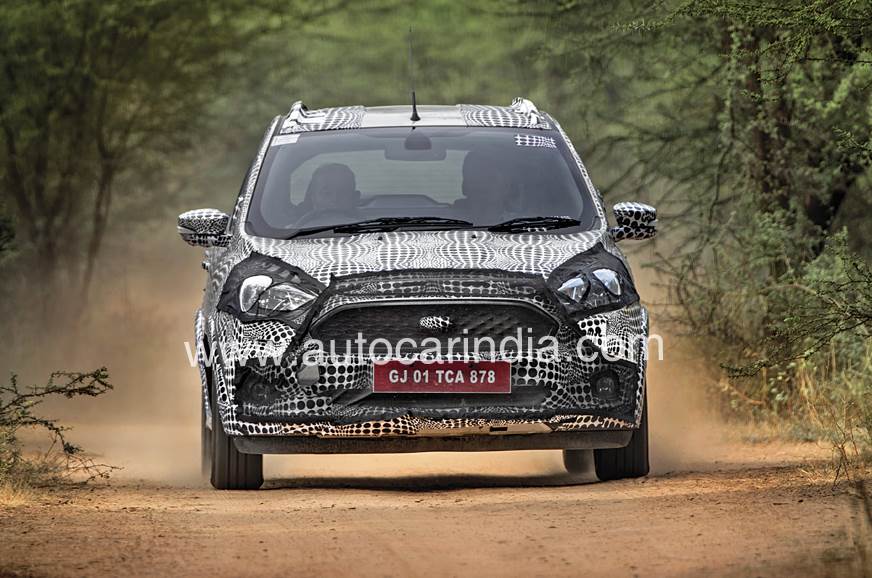 Also, along for the ride is Ford’s vehicle engineering guru Sarosh Soman. Don’t let his apparent lack of years fool you; Soman has been around at Ford forever and has worked on cars like the legendary 2008 Fiesta S – probably the best handling (and driving) front-wheel-drive car ever launched in India.

As we make our way out of the airport complex and into early morning Ahmedabad traffic, I notice how light and effortless the steering is to handle. It seems to have almost no weight at parking speeds, weighs up a bit at walking speeds and is still so light in traffic that swapping lanes is no effort at all. This is great, but will it weigh up later when you need more power? Can it? Sarosh seems to read my mind. “We’ve had to make our steerings much lighter at low speed; it’s what customers are asking for. But you’ll like how connected it feels as you load it up and go faster.”

We head out to the quiet outer ring road that circles the city, where there’s less traffic. And immediately, as I cycle through the gears, I pick up just how much lighter the gearbox feels. This all-new Getrag gearbox (known as MX65 ) replaces the IB5 and is lighter to use, nicely spring-loaded and super accurate. In fact, the more I drive this car through traffic, the more I realise how easy and light it is to drive. Steering and gearbox effort is down, of course, and the clutch and brake pedals are nicely weighted too.

What also seems to be working freakishly well is the motor. Sure, up against competition from masters like Honda and Suzuki, it has its work cut out. But the lusty tug it seems to generate every time I flatten the throttle after 4,000rpm is so impressive, I am really enjoying pulling it hard. And with the slightly shorter gearing on the car, we just fly past slower traffic. It’s quite a ride, as the engine pulls harder and harder all the way to the redline at 6,800rpm. It does get a tad more audible at higher revs, and the engine note does get slightly discordant, but the sporty snarl it emits more than makes up for it. But this is not the final car. “This strong top end, will it be detuned on the final car?” I ask Sarosh. “No” comes the prompt reply.

It’s only then that I recall a figure seen earlier during a presentation; this engine displaces just 1.2 litres, but it puts out 95hp, making it easily the most powerful engine in its class. 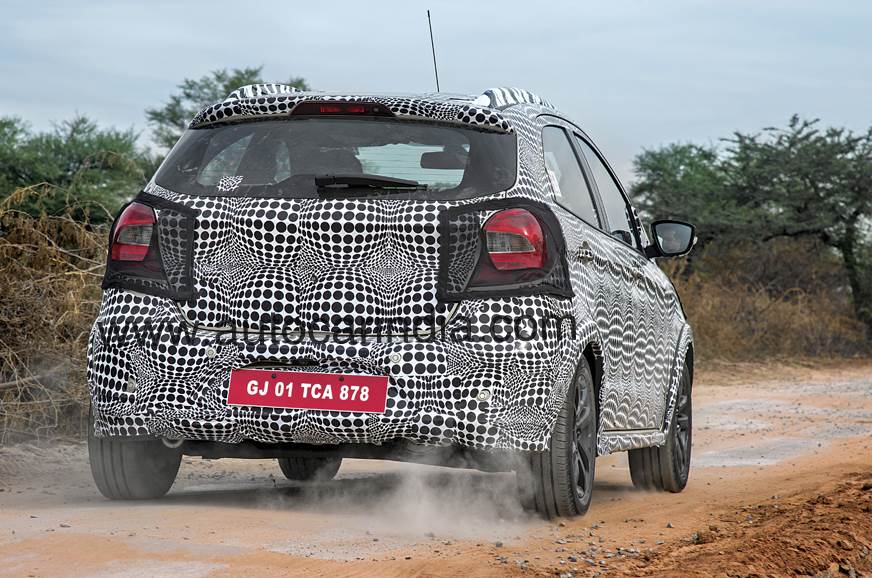 Also, as promised, the steering is giving me a good amount of confidence at speed. There is some numbness at the straight ahead, but as soon as I put in an input or change lanes, there’s a good amount of feedback and confidence. The suspension has been raised by 15mm, the track is wider, and this car rides on much wider and taller 185/60 R15 Goodyears. What’s great, however, is that there’s almost no impression of driving a car with a raised suspension, just as on its sister car, the EcoSport. And that connected feel you get from an EcoSport in long corners, that’s there here, so that ‘Fordness’ or Ford driving DNA is clearly there.

High-speed runs done, we slow down and get stuck in some more tightly packed traffic. And here too the engine impresses with its reluctance to stall at low engine speeds. There’s no lurch-lurch-lurch and no camel-like gait; and when I put my put my foot on the throttle, it pulls forward in one smooth motion. Wish performance was a bit stronger though. Yes, initial responses are good, but then there’s a bit of a flat spot until 3,000rpm, and that calls for some patience. A more aggressive setting on the digital throttle is what is needed here, and that’s exactly what Sarosh says Ford is working on.

We pull off onto a slip road next to grab some coffee, and it’s only here that I notice how well this car is riding. Ahmedabad’s relatively traffic-free ring road is mostly as smooth as a billiards table, but the patchwork slip-roads are full of holes, badly repaired sections and dips and crests.

Ford’s new baby, however, is totally unfazed. It doesn’t steamroll everything in total silence, like a well-setup Merc would, but bump absorption is so good, and the suspension works so silently, I barely slow down for anything. There is a bit of firmness at slow speeds, and some small up and down movement too, but once you’re past 40kph, this car can flatten pretty much anything. And I just love that. 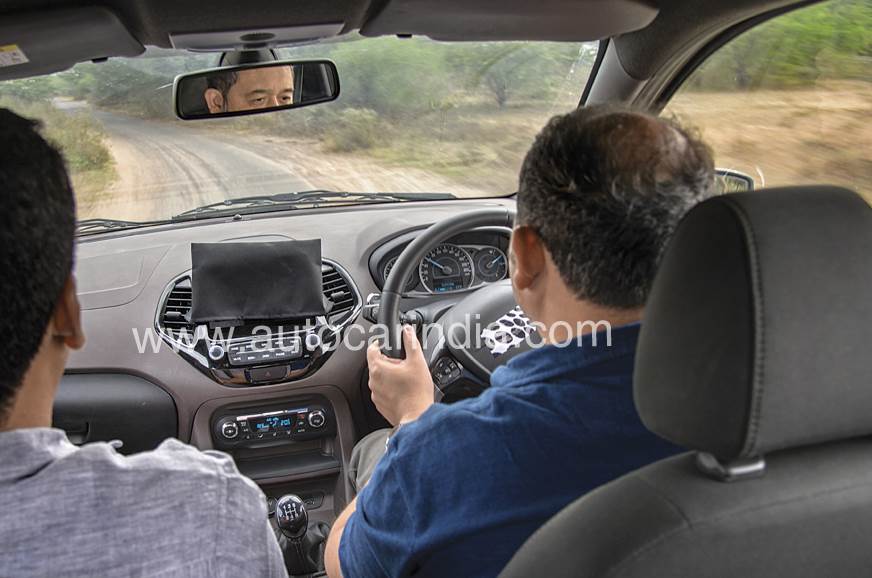 Some strong coffee later, we head away from the city in search of smaller roads and corners. And we’re in luck, as we come upon a section that can only be described as a rally stage, replete with patchwork surface, plenty of gravel and sand, and enough dips, crests and tight bends to give the Ford a real workout. Cattle stream in and out, and the occasional biker meanders along, but otherwise, we have the road to ourselves. And here the Ford just shines. With its raised suspension, lack of real SUV mass and strong 95hp engine, this thing just flies. Keeping the revs up and the engine on the boil is no sweat, the steering gets better and better as I apply more lock, and because this car has larger anti-roll bars, body control and grip are also quite neat. Soon, I’m enjoying the experience so much that I have to all but stop myself, as the car keeps sliding and the ESP keeps cutting in.

With its wider stance, larger wheels, additional body cladding, and new bonnet, grille and lights, Ford’s new baby is likely to cut a fine figure. It will be well-equipped and even the base versions will get a touchscreen, levels of safety kit will be high, and with other engine and gearbox options to pile on appeal, this is likely to be a Ford worth waiting for. Bad roads, poorly finished highways, back country roads – bring ‘em on.