The era of the Aventador comes to an end and how! Hormazd Sorabjee drives the angriest bull of them all. 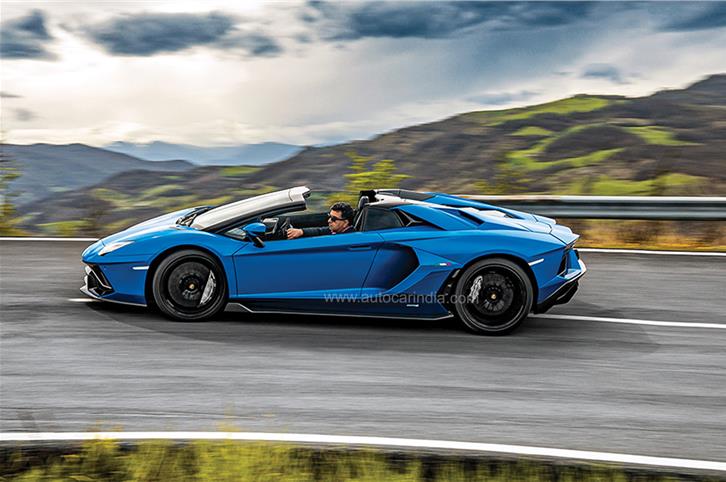 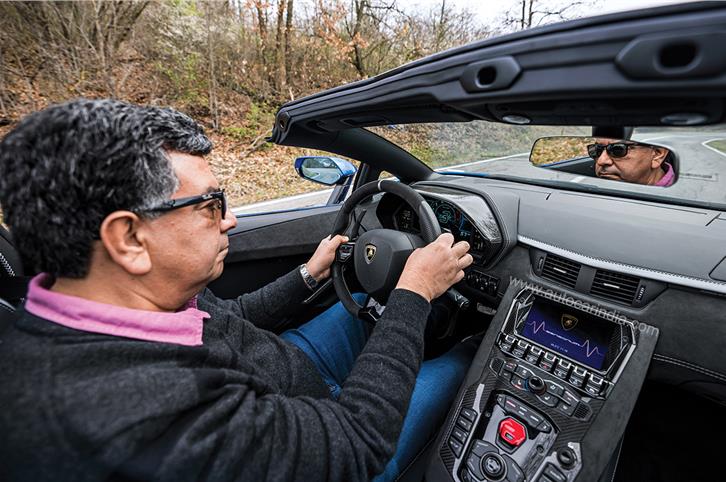 In the Ultimae, even the smallest of drives is a big event. 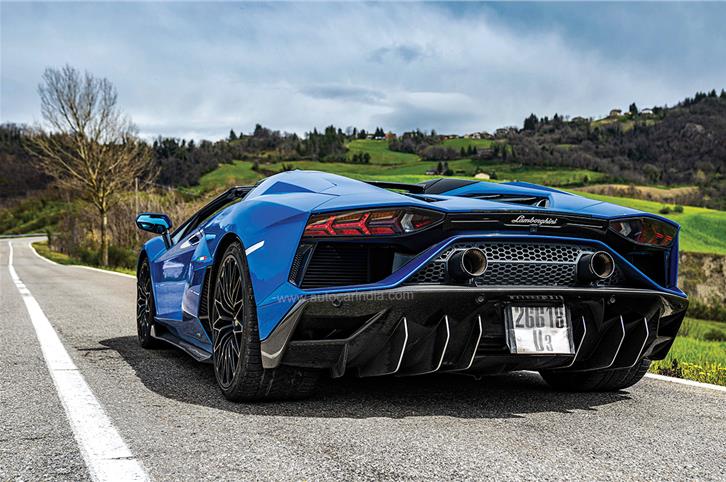 Ultimae looks as good from the rear as it does from the front. A true missile on wheels.

This was one of those days I knew would be hard to beat for a long, long time. Glorious weather, twisty roads snaking through beautiful Italian countryside and a shocking blue Lamborghini Aventador LP 780-4 Ultimae roadster with the roof tucked away, all to myself.

Exposed to the elements, the bellowing V12 engine inches behind my ears, an empty road in front of me and a clear sky above my head was a visceral driving experience, the likes of which only a Lamborghini can deliver. And this is not just any Lamborghini. 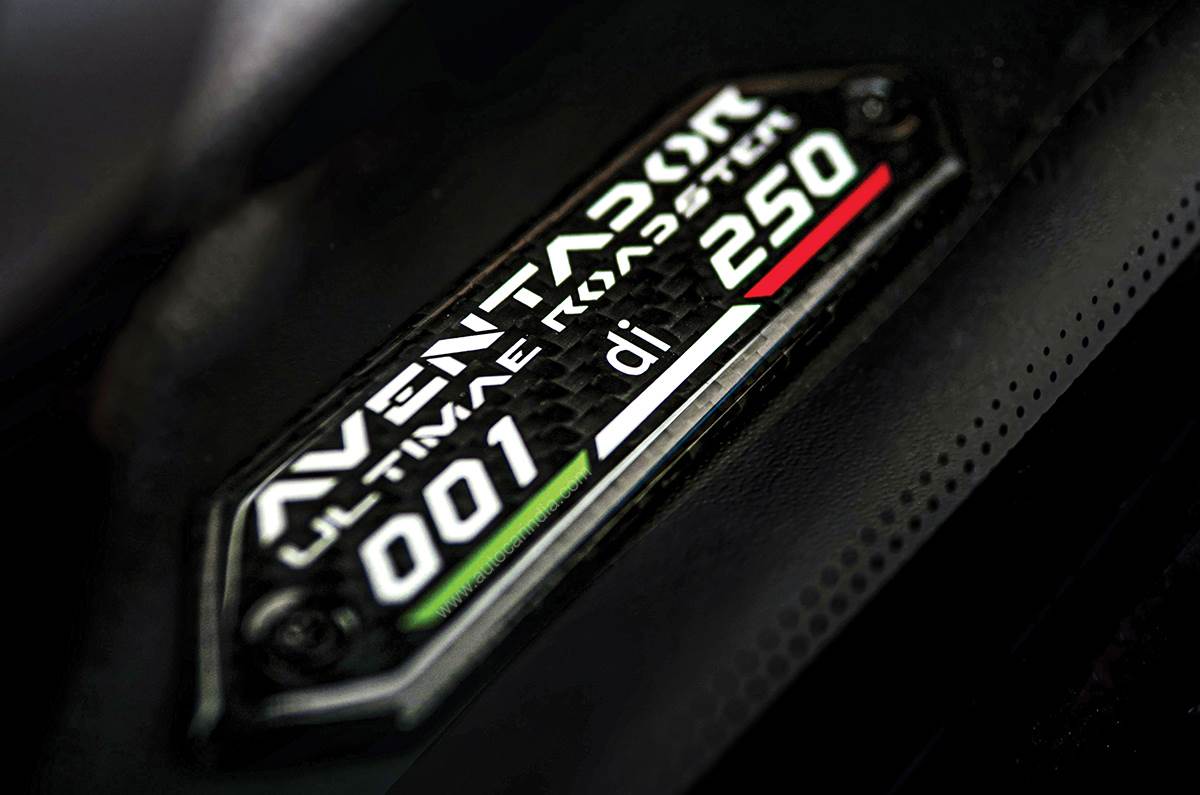 Production of Aventador Ultimae is limited to 250 roadsters, 350 coupes.

For over a decade, the Aventador has been the ultimate Lamborghini and the Ultimae (Latin for final or last) is the ultimate Aventador, the most extreme version yet. And true to its name, the Ultimae is not just the latest derivative of the monstrous Aventador, but the final one that marks the end of an 11-year run of this iconic supercar.

The Ultimae is also the last Lamborghini to use V12 power alone. The next-gen Aventador, due in 2023, will also be V12 powered, but will have an electric motor for company. Yes, future Aventadors will all be hybrids, and hence, the Ultimae, in this context, marks the end of an era of pure V12 combustion for Lamborghini. It’s an era that began in 1963 with the Italian marque’s first ever model, the 350 GT. Subsequently, the fabled Lamborghini Miura was the fastest car in the world when it was launched in 1966 and the 1974 Countach, a supercar that looked like it had come from outer space, all used V12 power as did their successors – the Diablo and Murcielago. 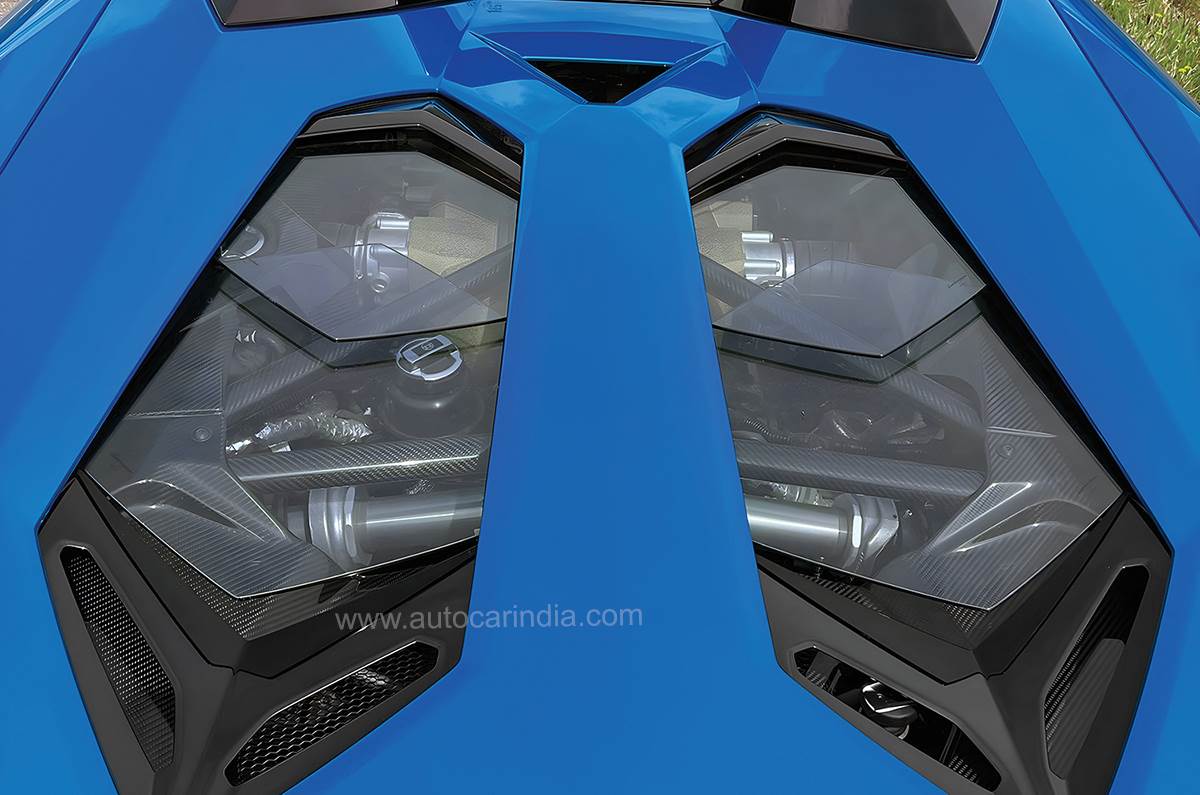 Legendary V12 showcased under glass cover is a reminder of the glory days of internal combustion.

The V12 Aventador too has earned its place in the pantheon of supercar greats by resolutely sticking to the old world values of its predecessors. So before the purity of the Aventador gets watered down with electrification, Lamborghini is giving a few lucky owners a chance to own the unalloyed and undiluted Aventador at its naturally aspirated best. And to that end, Lamborghini, as a last hurrah, has taken the Aventador Ultimae to the next level so it can bow out in style.

Beast for the eyes

No supercar looks as fast or intimidating just standing still as the angry-looking Aventador. This very wide and long, wedge-shaped supercar is more stunning than beautiful and drops jaws like nothing else on the roads, even in Italy where it’s a common sight. 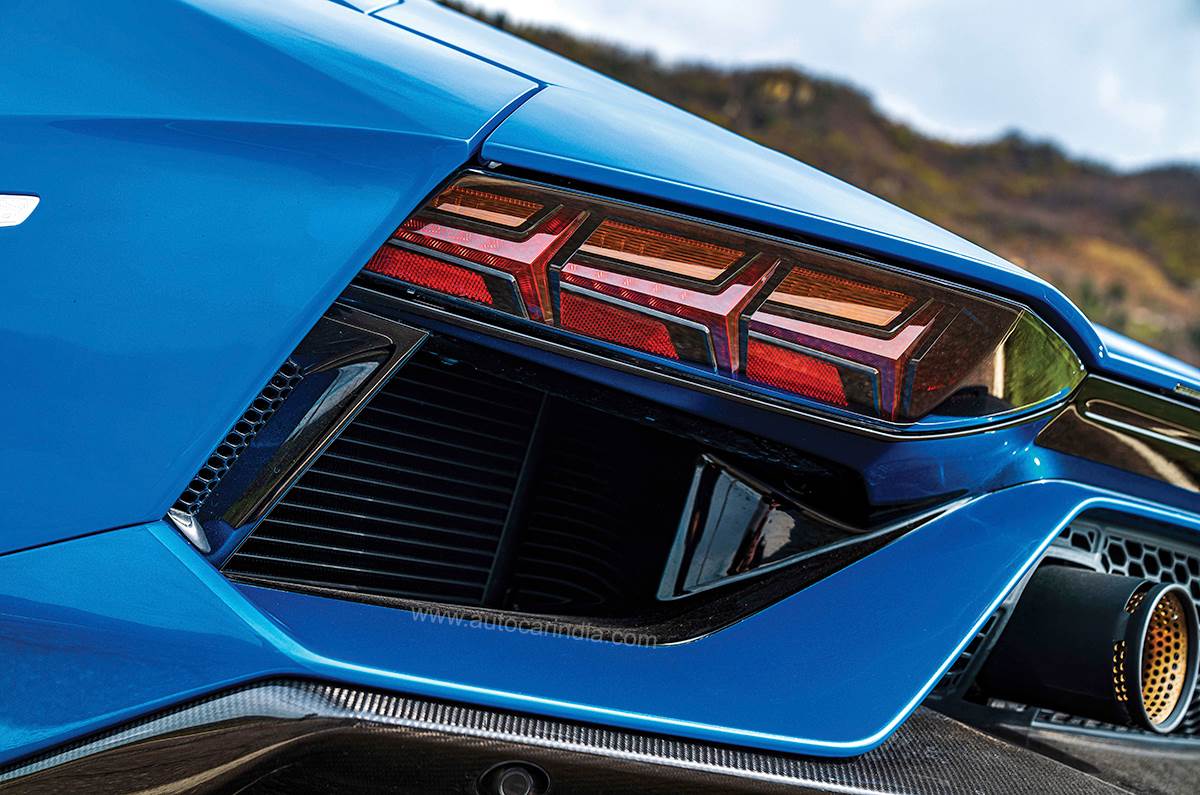 The Ultimae doesn’t have a massive aero wing or aero bits of the track focused SVJ, and bodywork isn’t as extreme or purposeful. What you get is an active rear wing that has three positions and retracts into the tail when closed. The highlighted rear diffuser contrasts nicely with the body, and other than being functional, is a stunning visual element too. The way the scissor doors swing open heavenwards is an integral part of the Aventador drama and the roadster without the roof looks even more stunning than the coupe. Scissor doors an integral part of the Aventador drama.

Removing the roof on the Aventador roadster is a complicated and manual process. You have to unfasten multiple latches, remove pins, pop up the two-part carbon fibre roof and slot both pieces in the front trunk. So why did Lamborghini choose this primitive (for a Rs 7 crore supercar) system instead of a simple, electrically operated hood, which, like in most roadsters, peels back with the simple press of a button? An electrically operated folding roof that retracts under the engine cover would have hidden the view of the glorious V12 sitting under three sheets of glass, and that’s something Lamborghini just didn’t want to do. And why would they?

The centrepiece of the Ultimae like any Aventador is its magnificent 6.5-litre V12 engine.

It’s been massaged to produce a staggering 780hp, which is 10hp more than the already bonkers SVJ and 90hp more than original Aventador LP700-4 launched in 2011. With this extra shot of power, the Ultimae will rocket from 0-100kph in 2.8 seconds, thunder past the 200kph mark in a time compressing 8.7 seconds, and given the road and space, will hit a top speed of 355kph. These figures make the Ultimae the fastest and most powerful road going Lamborghini ever. Driving an Ultimae Roadster with the top off is a raw and visceral experience.

The power output of the Ultimae’s V12 is quite incredible when you consider it’s been achieved without the help of turbos or any form of electrification and by natural aspiration alone. It’s the equivalent of climbing Mt Everest without oxygen and relying on just your lungs. So is Lambo’s V12 the Reinhold Messner of engines? Yes, but with more charm than the gritty mountaineer.

The allure of this long standing V12 engine doesn’t lie in the record power it produces, but what it represents – a bygone age of engines unsullied by turbos and hybridisation. This charismatic V12 relies on cubic capacity to produce its humongous power and has an old school charm few modern engines can match. The instant throttle response, the spine-tingling sound and the way it revs embodies natural aspiration at its best. 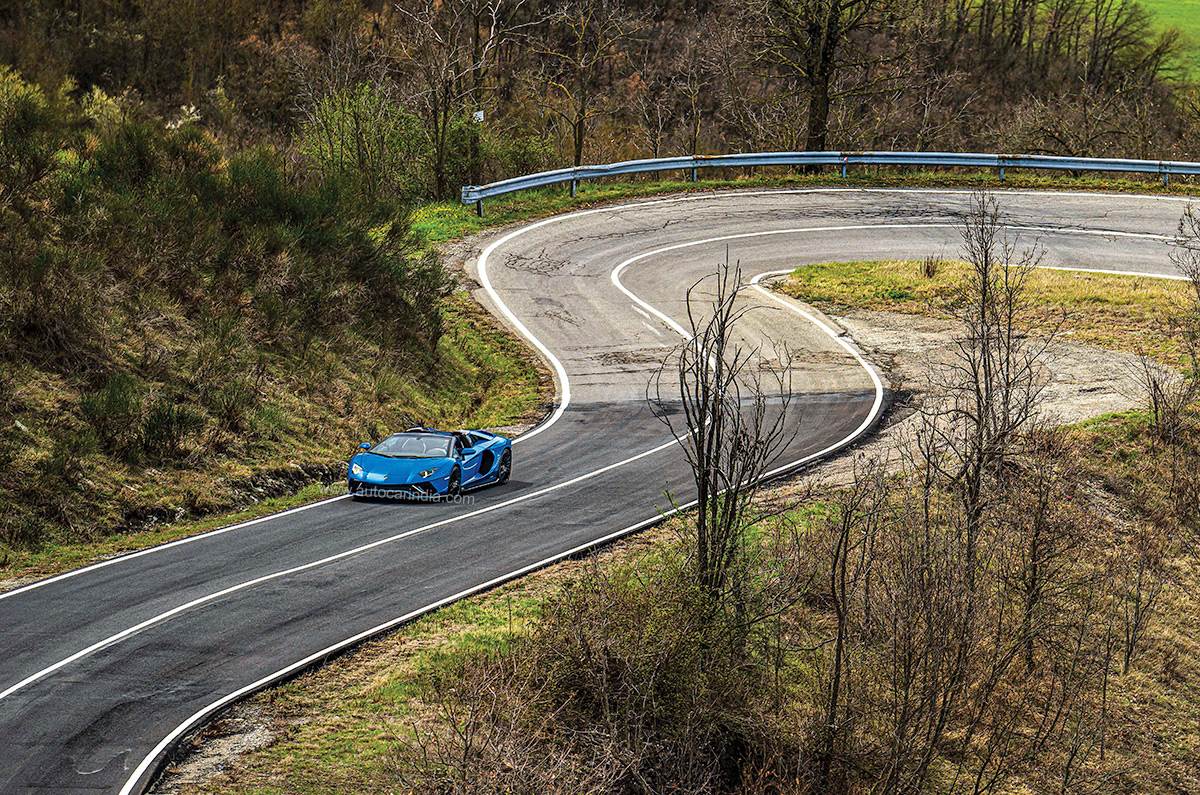 The V12’s allure isn’t about just power, but what it represents – a bygone age of engines unsullied by turbos and electrification.

Poke the long travel throttle pedal and the response is immediate. The Ultimae is scarily quick ricocheting from corner to corner, the engine pulling with increasing vigour as the revs rise. Past 6,000rpm, the Ultimae just explodes, the V12 howling ecstatically to its 8,700rpm limit. It’s an operatic sound track unlike anything else you’ve heard, and with the roof removed, the mix of the wind and engine sound has a delicious rawness that is an assault on all your senses. The scenery rushes past in one continuous blur and on these twisty roads, the Ultimae is exhilarating and frightening in equal measure. The only interruption to the relentless flow of power is the single clutch gearbox. Each upshift feels like you’ve been struck by a lightning bolt, your head snaps back and forth as power is delivered briefly, and abruptly, between shifts. For some, the brutal gearshifts are part of the Aventador’s charm, but for most, it’s one of the weak points of the car that’s been unresolved since it was launched.

The Aventador is not an easy car to handle even on an open race track, and on these tight roads with lumpy tarmac, it was quite a handful, even in the most relaxed Strada mode. The handling has improved over the years and the Ulitmae benefits from the latest chassis tweaks, but you still need to treat this car with huge respect. Once you come to terms with Aventador’s dynamics and find your own limit (always keep a huge margin), you’ll revel in how eager and engaging the Ultimae is. Ultimae gets 20-inch forged alloys in front and 21 inchers at the rear.

The steering is full of life, has zero slack and communicates every ripple to your fingertips. I was amazed with how eager the Aventador was to turn into corners and this sharp front end bite allows you to place this very wide supercar accurately on roads that seem to shrink around you. Even the minutest of your moves is met with an instant response, and it’s easy to get into a nice flow on these roads that snake through Bolognese hills. Get close to the limit and there’s a hint of confidence inspiring understeer, but abruptly lift off and you can feel the hefty V12 wanting to pivot behind you. That can be a bit disconcerting, especially in the most extreme Corsa mode, where the entire car feels like it’s cemented to the tarmac and has little compliance. 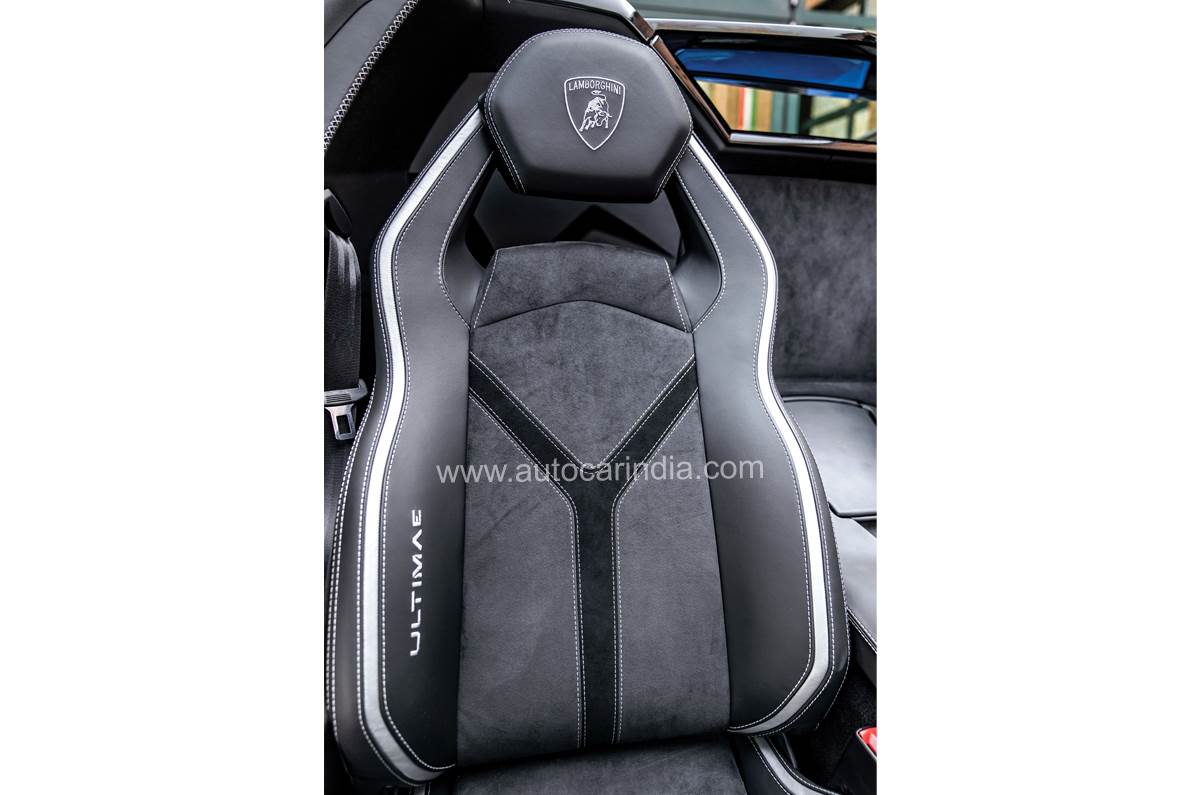 It’s also when you’re going slow or stuck in traffic that you expose the weak points of the Ultimae. The gearbox is clunky and jerky, rear visibility is very poor, and hence, keeping an eye on those wide haunches while driving down narrow, single lane streets on the return to the Lamborghini HQ – Sant’Agata Bolognese – was quite harrowing.

The dated infotainment system (there’s no touchscreen), which looks like it’s plucked from an old Audi, also betrays the Ultimae’s lineage. But it’s a lineage customers hanker for. 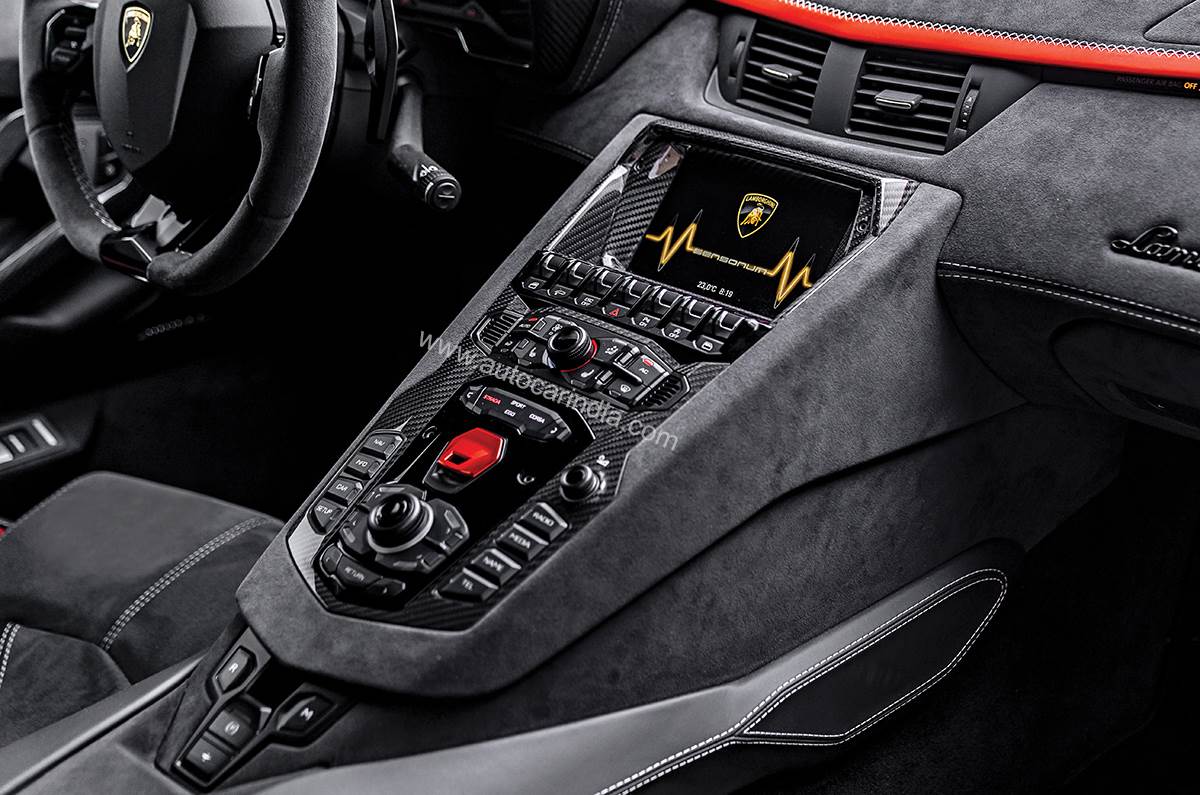 No surprise then that the limited run of 600 Ultimaes (250 roadsters and 350 coupes) are all spoken for. These rich few (including a customer back home) have put their money down (upwards of Rs 8 crore in India), knowing it’s their final chance to own the last pure, but unpolished diamond of the supercar world as well as an exciting and exhilarating slice of a glorious past. 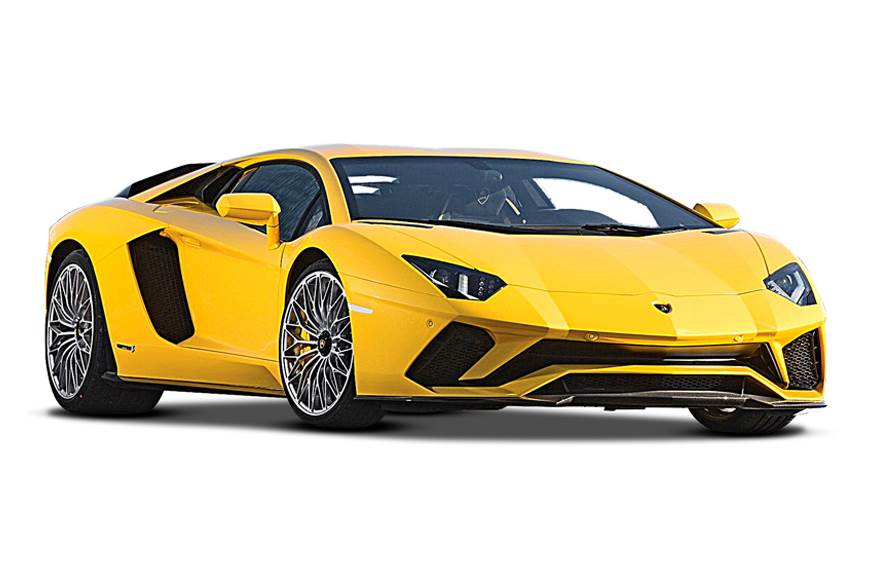 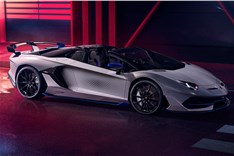 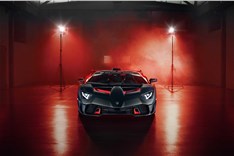 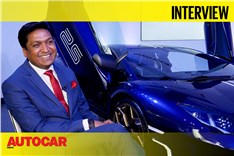