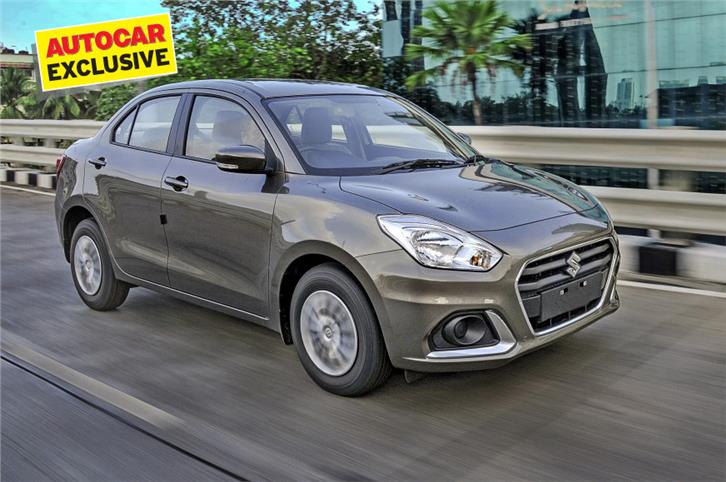 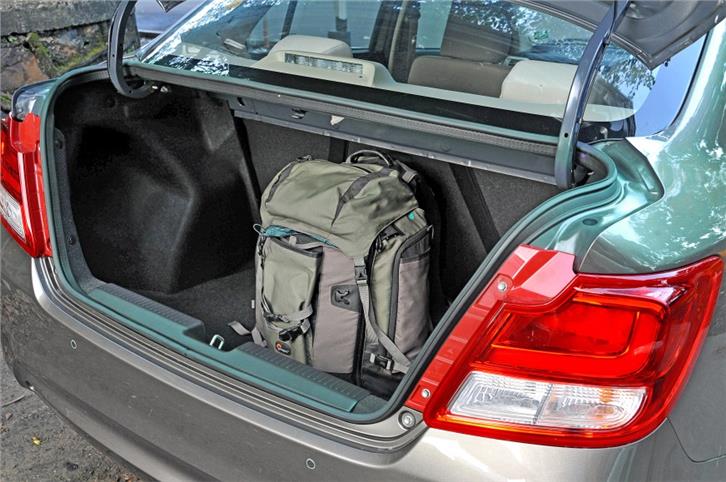 Ever played 'spot the difference' with a facelifted car? Of course, you have. "Is that a new bumper? Have the lights changed?"... it's truly difficult to tell at times. But there's no such problem here - Maruti Suzuki's 2020 Dzire is a car that looks very different, even at a mere glance.

Most design changes on the 2020 Dzire are concentrated on the nose.

In place of the narrow chrome grille now sits a tall Audi-like, single-frame hexagonal 'Bulgarian beard'. The number plate is now incorporated into the grille, the fogs get more matte black around them, and there are chrome 'brackets' under the chin. So the nose of the new Maruti Dzire looks very different. There aren't any other significant changes made to the rest of the car, and that is a bit odd. 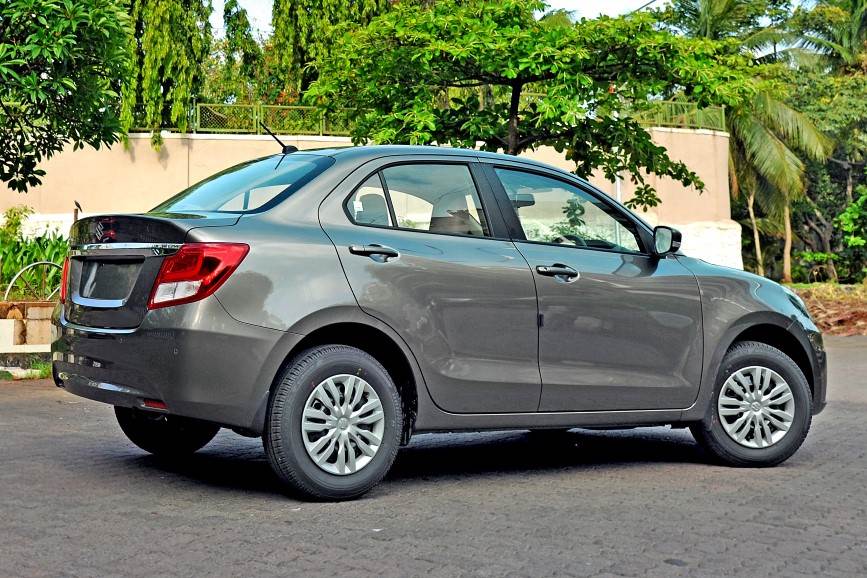 This lower-spec version makes do with steel wheels in wheel covers (pictured), though the top-spec trim gets dual-tone alloys.

Also new is the DualJet engine. Soon to be fully manufactured in India, the engine uses two injectors for every cylinder, as the name suggests, placed in close proximity to the inlet valves. Fuel delivery, as a result, is more accurate. The proximity of the injectors to the cylinder head also quickens response time, and atomisation of fuel, crucial for complete combustion, is better too. Power now is at 90hp and the engine also has a healthier torque curve. Idle start/stop, a first-in-class feature, is on offer now, and the Dzire has a higher officially certified efficiency rating of 23.26kpl for the manual, against the earlier car's 22.0kpl. 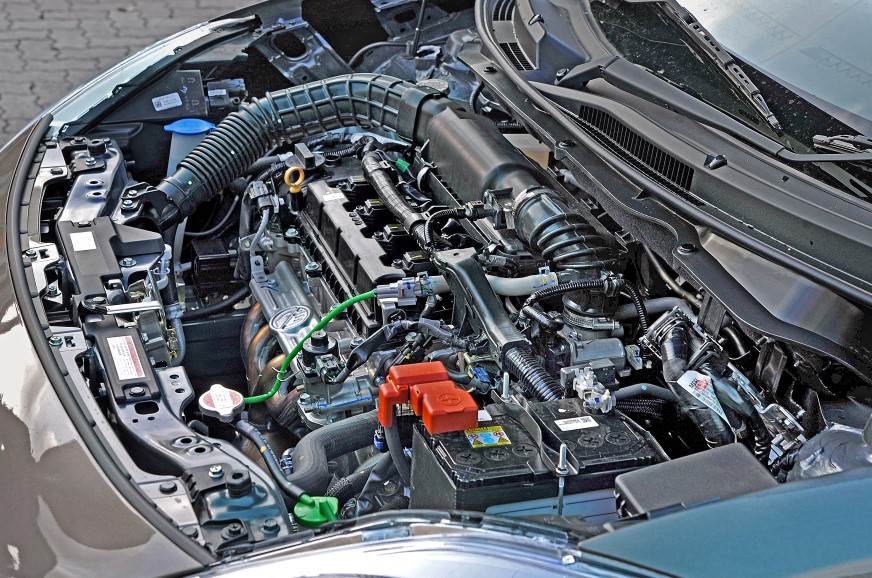 Start up the DualJet and you can immediately tell that there's something different under the hood. The idle is hushed, it is near vibration-free, and the engine runs so smooth, I almost crank it again. Only the tachometer needle, hovering calmly at 800rpm stops me.

This engine is also more responsive than the regular K-12. Tap the throttle and it spins up almost immediately, pulling the Dzire forward easily from just 1,000rpm. As you turn the engine faster, the tug gets progressively stronger, and then, short-shift to a higher gear and this effortless performance continues. There clearly is more oomph at low engine speeds. This means driving in the city will be a breeze, and you can keep the Dzire in a higher gear and potter around in traffic. 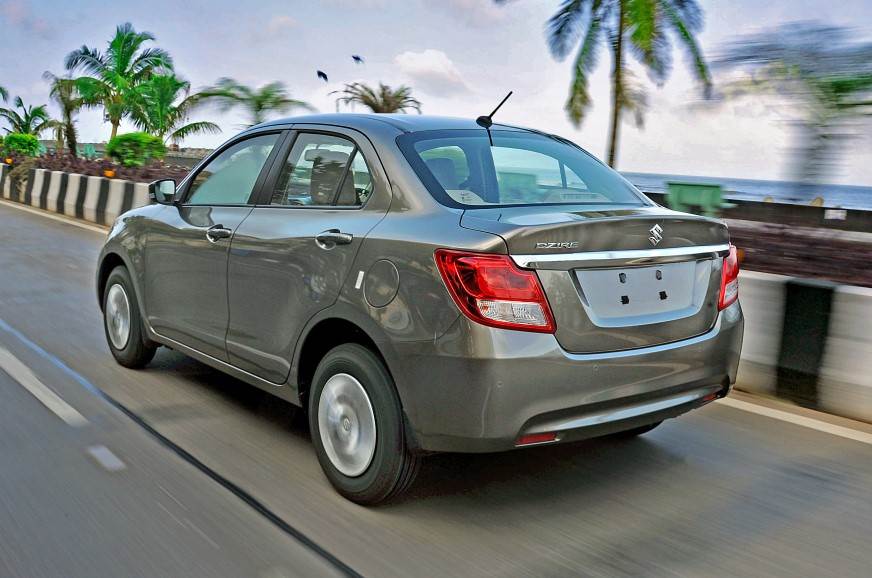 The new engine is more responsive at the lower end of the rev range and is keen to spin fast too.

This engine likes to spin fast too. Stay on the gas and it will rev all the way to 6,400rpm (100rpm more than the regular K-12), and keep your foot in after you upshift, and performance feels stronger still. A quick test we conducted saw the new Dzire do the 0-100kph sprint in 12.0sec, that's over 0.6sec faster than the earlier car, and more than a second faster than the also 90hp petrol Honda Amaze. The Hyundai Aura with its turbo GDI petrol engine, however, is much faster, taking just 10.6sec to do the dash.

With more power and performance on hand and the promise of better fuel economy, there's been a significant upgrade. Otherwise, the Dzire is much the same from behind the wheel. The steering does feel like it has a bit more weight, which is nice, and the suspension feels like it has been stiffened marginally, but apart from that, the new car remains a stable but un-involving drive. 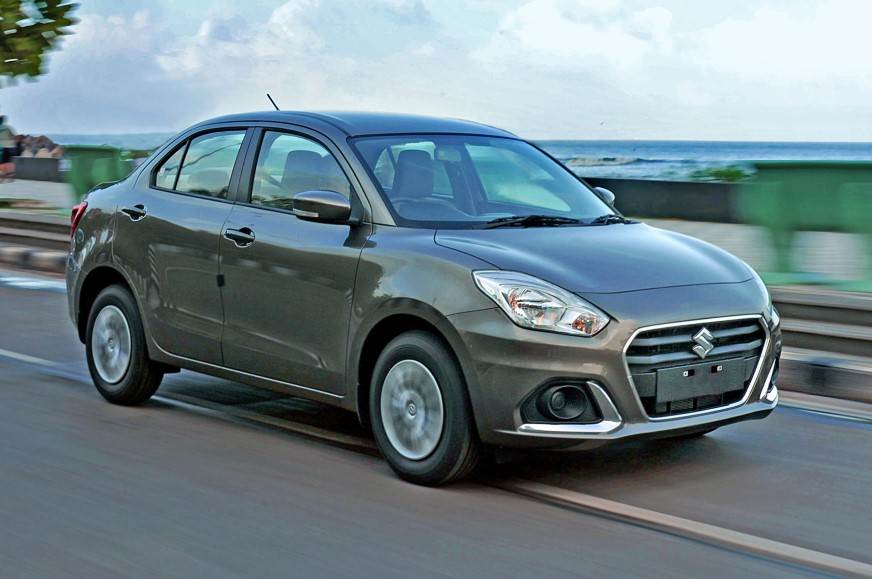 Other than the new engine, the Dzire feels the same to drive as before.

There are no significant changes to the cabin. And this isn't necessarily a bad thing. For one, levels of comfort at the front and the rear seats are high, even when compared to most rivals. There's plenty of space up front, and the Dzire's long 2,450mm wheelbase means there's loads of legroom in the rear as well. Two tall passengers, in fact, can comfortably sit one behind the other. In addition, the back seat is supportive and nicely reclined, and since there's a vent at the rear, it makes for a very competent chauffeur-driven car; quite impressive for a compact sedan. 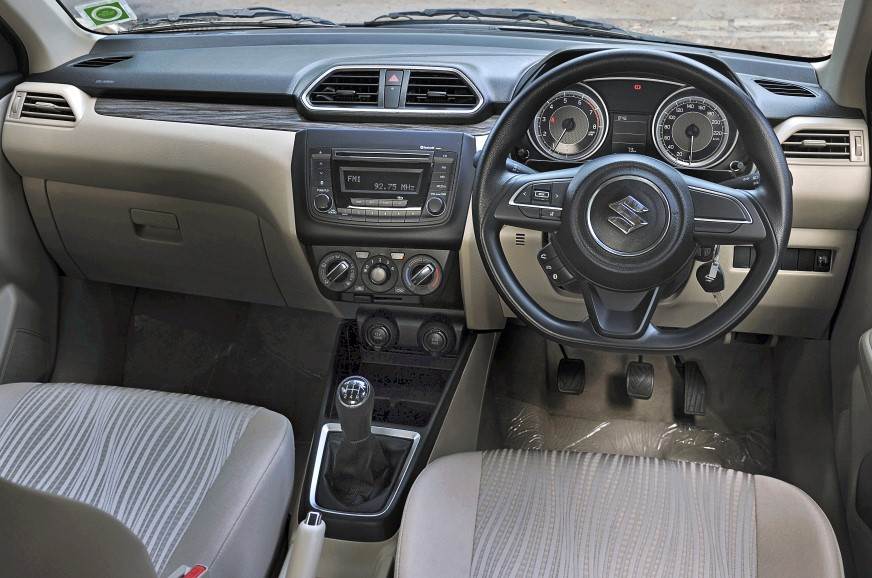 No major changes to the cabin; even lower variants (pictured) get faux wood trim on the dashboard.

At the front, there are some small updates, but these have more to do the kit on offer. While the car we drove was a VXi, the ZXi gets Maruti's uprated and much neater SmartPlay Studio interface, a new colour MID in between the dials, and cruise control as well. 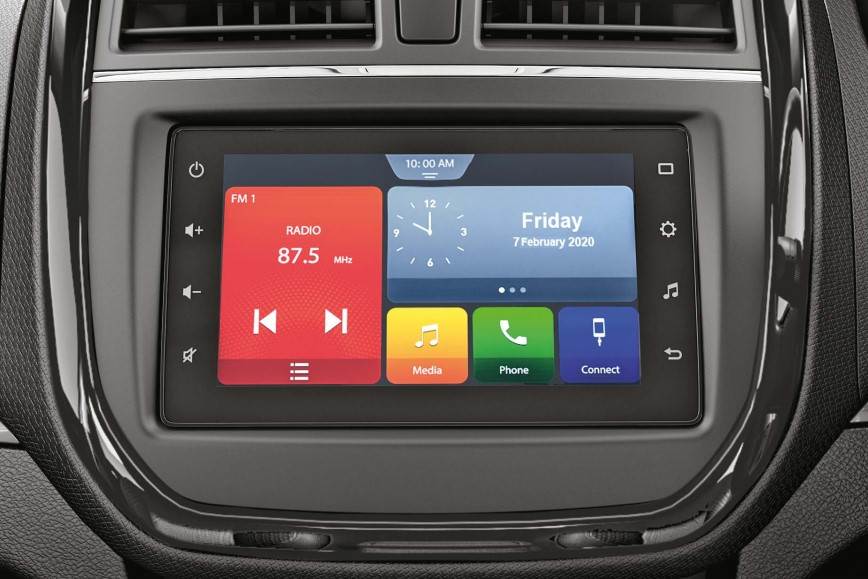 That aside, the flat-bottom steering wheel, with its leather and faux wood insert still looks good, the dials are crisp and clear, and even the bits of wood trim on the dash are nicely done. Some of the plastics could have been more solidly built, and the car is missing some kit like wireless charging, but, overall, the cabin is a very comfortable place to be. 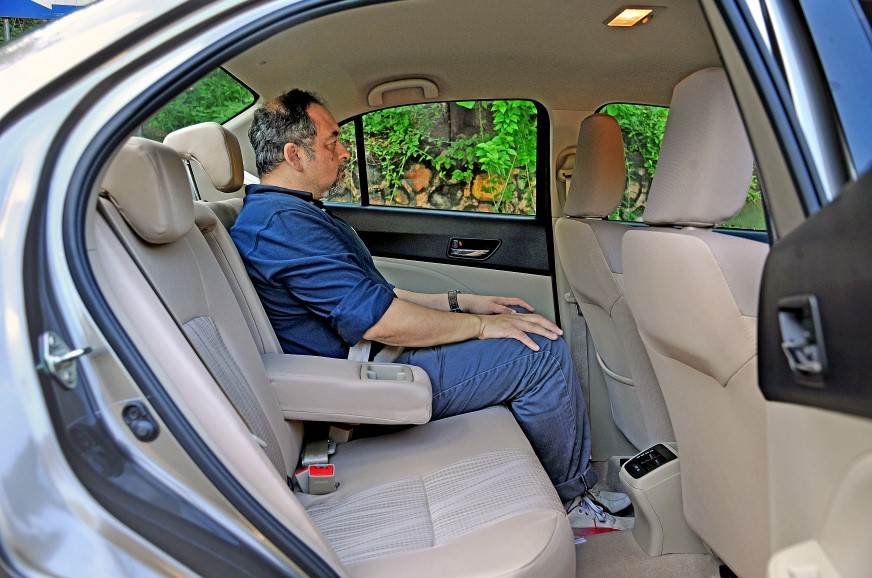 The back seat is supportive and nicely reclined.

With its comfortable, large and well-equipped cabin, friendly driving manners and refined performance, Maruti's Dzire petrol has enjoyed a long stint at the top of its class. The Dzire may not be the most fun car to drive and the Hyundai Aura with its turbo engine clearly has more performance. Still, what keeps the Maruti perched at the top is the fact that it has been such a good all-rounder. And now that it comes with a smoother, more refined, more responsive, more powerful and more efficient engine, and more kit as well, it is better still. The top-of-the-line ZXi+ automatic is a bit expensive with an ex-showroom price of Rs 8.80 lakh, but if you are looking for a compact sedan, the Dzire should be at the top of your list. 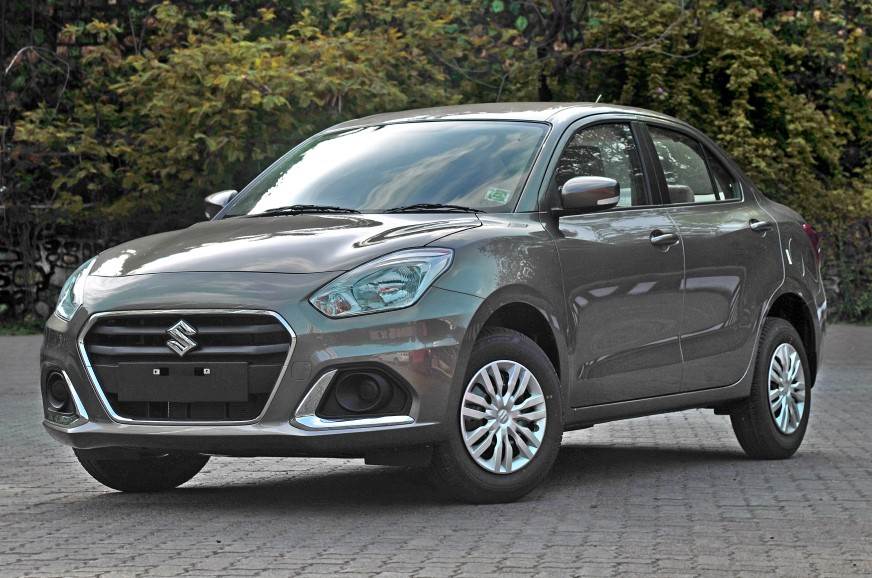 *Not to Autocar India test standards 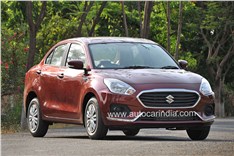 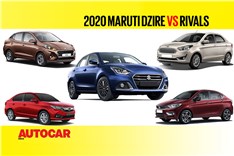 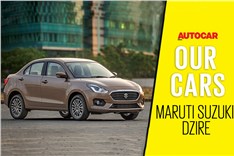