The outrageous Zoe e-sport concept is a showcase of Renault’s EV technology and a glimpse of what the future of the hot hatch could be.

The smallest flex of your foot is met with an instant response. 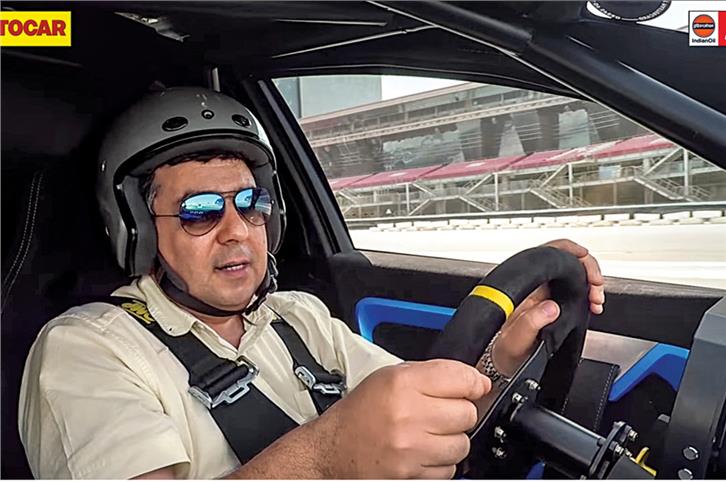 Sounds and sensation of driving a racing EV feels alien. 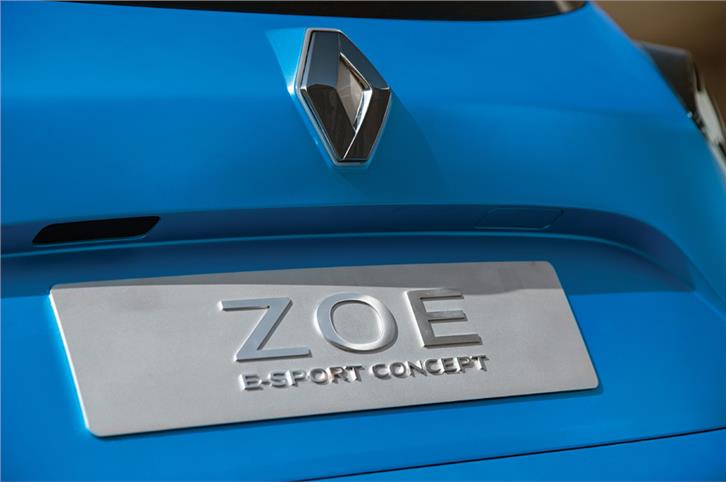 Zoe e-Sport concept – not for production.

e-Sport, with all its bulges and flared-out arches, means business.

Now before you ask, no, you can’t buy it and it’s not coming to a showroom near you. In fact, it’s not coming to a showroom at all. So then, why am I driving this electric blue Renault Zoe e-Sport – a one-off prototype? Because we are told it’s electric; and that electric cars are the future. But it’s a future that gives enthusiasts like us sleepless nights. Just imagine a world without internal combustion and one that is ruled by emotionless, boring cars, silently roaming streets like appliances. That’s the cue for the Zoe e-Sport to come in and comfort us with the prospect that EVs (apart from their goody-good image of saving the planet) can be fast and fun. Okay, Tesla has already proved that EVs can deliver sportscar levels of acceleration, but the Zoe e-Sport takes it another level by bundling supercar-slaying performance in an ordinary hatchback. This could be the template for a GTI (or GTe?) hot hatch in the next 7-8 years.

The Zoe e-Sport is also a showcase of Renault’s Formula E racing technology and no doubt, the famous adage, ‘race on Sunday, sell on Monday,’ will soon apply to EVs, too. It also makes me digress a bit to the lost opportunity Mahindra Racing’s super successful Formula E campaign is. If Renault can stuff Formula E bits into a Zoe why can’t Mahindra do the same to a KUV100 as a one-off? That would have made some statement at the Buddh circuit.

Coming back to the e-Sport; it packs two Formula E motors, each to power the front and rear axle. Collectively, they produce 460hp of pure electric power distributed through all four wheels. The e-Sport has a tangible link to a road-going Zoe, but like a typical ‘silhouette’ race car, there is not a part in common between the race and road versions.

The e-Sport has a tubular chassis built by racing specialist Tork engineering and the body is made of carbon fibre. Hunkered down on massive 20-inch alloys that sit under outrageously flared-out wheel arches, the Zoe e-Sport – with its massive front air dam, carbon-fibre spoiler, and rear diffuser – certainly looks the part.

The underpinnings, too, are pure race car, with a double wishbone suspension front and rear, pro Öhlins dampers that are four-way adjustable, AP racing brakes and mechanical differentials on both axles with a 45/55 front/rear split.

Inside, it’s all racing car too, with a roll cage and a pair of Recaros with 6-point harnesses. There’s a single screen in front of you, which looks very high-tech and gives you all sorts of information on the power flow, and a trio of chunky rotary switches which select drive and vary the power output. It’s a stripped-out cabin with not much by way of creature comforts. Forget air-conditioning, there isn’t even a proper blower, and the windows are fixed and don’t roll down, whilst the door handles are flimsy levers. All this has been done in the name of saving weight. But tipping the scales at 1400kg, the e-Sport isn’t exactly light; and that’s because of the two 20kWh lithium-ion battery packs placed low down in the floor, that alone weigh a very hefty 450kg.

It may not have a favourable power-to-weight ratio, but with max torque available from a standstill, the Zoe e-Sport, according to Renault, will rocket to 100kph in 3.2sec and into 210kph in just 10sec. This makes the electrified Renault quicker than a Porsche Turbo. Time to test the claim? That’s exactly what I’m here for, on a hot, sunny day at the Dubai Autodrome.

ALIEN WEAR
Turn on the e-Sport and you can hear various wooshes and whirrs as it comes alive. Select Drive, engage the highest voltage setting (for max power) via the rotary controls on the dashboard and the e-Sport is primed for take-off.

You know the car is alive when a gentle prod of the right pedal is all it takes for the e-Sport to lunge forward like a frightened cat. The smallest flex of your foot is met with an instant response and there is absolutely no delay in power delivery.

I hold a steady ‘throttle’ trundling down the pit lane of the Dubai Autodrome, which allows me time to adjust to the relative lack of sound, which bears no resemblance to a high-strung racing engine. There’s a steady hum from the electric motors and cooling fans behind me, which sounds like some industrial machine. It all feels quite alien.

Exiting the pit lane, I press down on the accelerator and that hum turns into a high-pitched whine as the e-Sport bolts forward. The acceleration is incredible and pushes me into the deeply contoured Recaro bucket; but what I can’t get my head around is how the rapid build-up of speed is accompanied by a complete lack of drama. There’s no loud, manic scream to the redline, no interruption of power with gearshifts, but just a strong, seamless and linear shove forward which actually serves to mask the feeling of speed.

But there’s no denying the e-Sport is very quick, and down the long start-finish straight of the Dubai race track, this electric racer hits its 210kph top speed well before the braking zone. But, like in most EVs, hitting Vmax in the e-Sport is like hitting a wall – after which the power abruptly tails off.

Racing underpinnings give the e-Sport sabre-sharp responses and it handles like a go-kart. Also like a go-kart, the e-Sport’s centre of gravity is a few inches off the floor, thanks to the low-slung battery back. The 20-inch super-soft Michelins have loads of grip and, as a result, the e-Sport feels absolutely glued to the tarmac. But it’s quite easy to unstick the e-Sport. The instant shot of maximum torque when you floor it, can break traction; and it’s the front that gives way first. Though it’s a four-wheel drive with a 50:50 split front and rear, the e-Sport behaves more like a front-wheel-drive car and understeers when pushed hard. The steering is very quick with no slack and it’s a bit edgy on the limit. The ride quality is again race car-like with little compliance and even less suspension travel.

Understandably, its handling isn’t fully sorted, as this car is meant to demonstrate what’s possible and not break lap records. But the Zoe e-Sport’s range – a mere 10 hard laps of the Autodrome – is the main stumbling block for it to become a production reality. But that didn’t stop me from beating a Porsche Cayman S against the stopwatch (see box). That’s what gives us petrolheads hope for the future.

ZOE E-SPORT VS PORSCHE CAYMAN S
This isn’t an apples-to-apples comparison, it’s more like chalk and cheese, but then, this isn’t a typical Autocar road (or track) test. It’s simply to see if an electric car can go quicker round a track than a pedigreed sportscar.  To keep it simple, I’m going to race both cars one at a time, against the stopwatch. I’m not here to break lap records but keep myself, the driver – the most important variable in the equation – constant.

It’s the e-Sport that I have a crack at first. The pair of electric motors are ultra-sensitive to any accelerator inputs, so I have to be extremely measured with my right foot to stay neat and tidy. Squeeze a bit too much, especially mid-corner and the front tyres run wide. The steering is super-sharp which lets me hit the apexes with spot-on precision but the regen brakes aren’t very linear and could do with more feel. What reels in the time is the phenomemal acceleration and super-low centre of gravity. There’s negligible body roll and the Zoe deftly pivots on its axis to rocket through the corners. The only time it ran out of juice was down the back straight when it slammed against its 210kph top speed.

Top-end performance is where the Cayman excels and down the straight it was a good 20kph faster – but that’s the only concession it gave to the e-Sport. No doubt the Cayman is beautifully balanced and deftly turns into corners with just a hint of understeer; but for sheer pace, it couldn’t match the e-Sport. It was slow coming out of corners and lacked low-end punch compared to the e-Sport’s constant state of max torque. Where the Cayman lost time was transitioning between corners and, despite weighing about the same as the e-Sport, didn’t feel as agile. The result? Pushing both cars as hard as I could, the e-Sport was a good two seconds quicker than the Cayman S. Now if only Renault can get the batteries to last a race distance.